For months, Army officials have bragged that the branch’s new Joint Effects Targeting System will boost the precision and lethality... 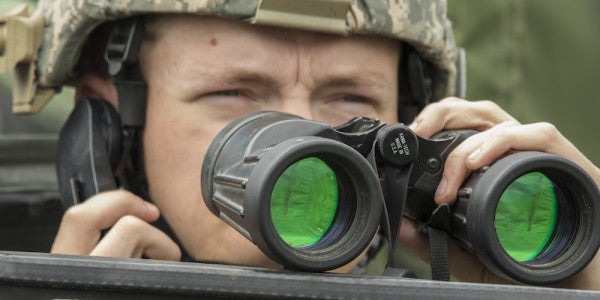 For months, Army officials have bragged that the branch’s new Joint Effects Targeting System will boost the precision and lethality of forward observers by effectively “turn a howitzer or a Paladin into a giant sniper rifle.” By the end of the year, every artillery platoon will find out if they were bluffing: After months of intensivetesting, the Army plans on fielding the portable new JETS to U.S. combat troops downrange starting in September 2018, PEO Soldier officials told Task & Purpose on Jan. 19.

Envisioned as a lightweight man-portable substitute for the bulky Lightweight Laser Designator Rangefinder, JETS relies on a unique assembly of advanced sensor technology to measure everything from distance to target to the rotation of the Earth, allowing forward observers to relay more precise targeting data up the chain of command than ever before. After months of testing and evaluations, PEO Soldier claims that the system can deliver targeting data precise enough to place a GPS-guided munition within a 10-meter target location at a range of more than 2.5 kilometers, eliminating the need for fire for effect and boosting the lethality on platoons on both the maneuver and indirect fire sides.

“If your target is, say, the intersection of four city blocks, previous non-precision targeting devices (not including the LLDR [Lightweight Laser Designator Rangefinder]) would get you within a block range of that target,” Capt. Eric Munn, assistant product manager for JETS at PEO Soldier, told Task & Purpose. “[JETS] puts you within that intersection, and it does so without having to walk a spotting round down to the target and alerting them that, well, you’re shooting at them.”

“The standard 155mm M777 howitzer has a kill radius of 70 meters, no matter where it hits,” he added. “[JETS] gives soldiers a target location that’s 10 meters from the target, so even if they hit at the very outside of that 10-meter window, you have 60 meters of play for a kill radius. If we can get a round inside that intersection, it doesn’t even matter where the target is.”

While the LLDR currently used by soldiers downrange generates detailed CAT-II precision-targeting grids for Army personnel up the chain of command, the JETs significantly improves on the precision targeting concepts the former pioneered. Besides the standard GPS antenna and laser rangefinder, Munn pointed to the Precision Azimuth and Vertical Angle Module (PAVAM) that uses a resonating gyroscope to measure the rotation of the Earth and determine true north regardless of operations conditions.

“Most northfinding systems use a celestial camera that literally takes pictures of the sky, but that’s weather dependent: If there are clouds or fog, you don’t get the pictures you want,” Munn told Task & Purpose. “The PAVAM gets you true north regardless of weather.”

But for Munn, who started his Army career in the fire support community, the biggest benefit isn’t precision but size. As a handheld, man-portable system, the JETS target locator handset weighs just five pounds, a huge departure to the bulky, tripod-dependent LLDR and a major boon for forward observers already weighed down by radios and other gear. “The PAVAM itself is normally the size of a basketball,” Munn said. “A single soldier can operate this system and carry this for an extended range.”

Indeed, that’s the goal of PEO Soldier. The LLDR has historically been fielded at the company level, an equipment decision that left many infantry and armor platoons without the tool in their arsenal. Munn said the Army currently plans of fielding JETS to every Army single platoon to ensure that every forward observer crew has the best tools at their disposal.

Apart from filling that capability gap, broader fielding will likely prove beneficial long-term for precision munitions deployed from fixed-wing aircraft on top of artillery pieces. JETS is a joint-interest program with the Air Force and Marine Corps, and Munn told Task & Purpose that the system provides CAT-II grids that are compatible with a full range of drop GPS-guided munitions and Army-fired artillery shells, from the 155mm howitzer shell to the Hellfire missile Indeed. Munn added that the targeting data vacuumed up by the handset could easily transfer to aviators above the battlespace depending on each branch’s digital communication requirements. Eventually, the tool could see fielding to joint terminal attack controllers.

“They say the biggest weapons that FOs have is their radio because they can call in the most lethal weapons on the battlefield, from direct-fire munitions to artillery,” Munn said. “[JETS] gives them the ability to not only call in those systems, but to do so more effectively and much quicker, and that will only make them more lethal.”