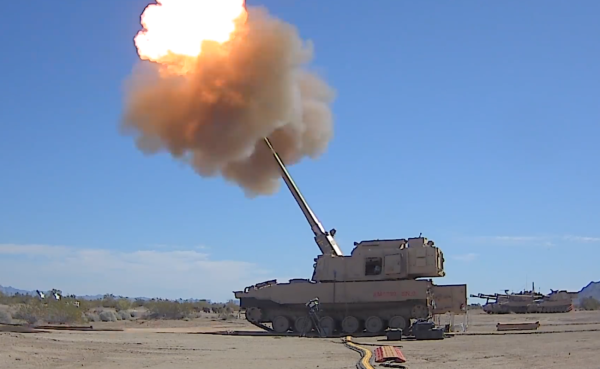 The Army is putting its  Extended Range Cannon Artillery system through its paces.

The service conducted a demonstration of its new XM1299 long-range precision fires prototype at the Yuma Proving Ground in Arizona on March 6, 2020, nailing a target from roughly 40 miles (65 kilometers) away.

The test involved both M982 Excalibur guided artillery shells and two XM1113 Increment 2 rocket-assisted projectiles, per Jane's 360, and the Yuma Proving Ground was happy enough to show off the former in action in test footage released later that same day:

Here it is again in GIF form:

Developed in response to increasing concerns of near-peer adversaries like Russia and China, the ERCA prototype originally nailed targets with pinpoint accuracy ranges up to 38 miles (62 kilometers) during testing at Yuma back in March 2019.

As Task & Purpose previously reported, the XM1299 will eventually incorporate a fully automated ammo loading system to boost the howitzer's rate of fire from the standard 3 rounds per minute to a blistering 10 rounds per minute.

“That will give us the opportunity to test the platform in the hands of an operational unit and evaluate the operational concept for support fires at the division level,” Brig. Gen. John Rafferty Jr., director of Army Futures Command's Long Range Precision Fires Cross Functional Team, told Defense One.

In the meantime, here's footage of the XM1299 in action: