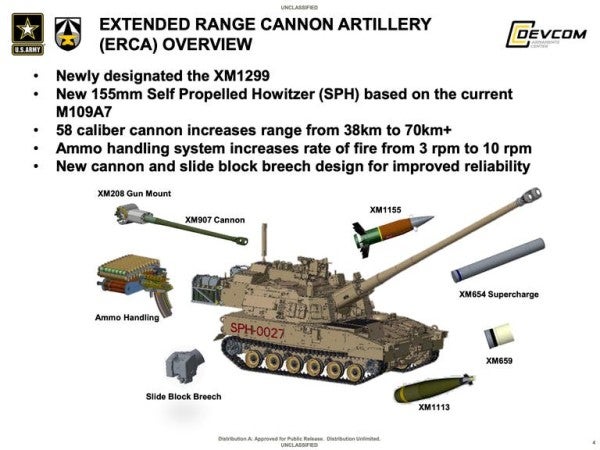 The Army is working with defense giant Raytheon to develop a 155mm ramjet-assisted long-range artillery round capable of nailing targets at ranges of up to 60 miles (100 kilometers) away, the company announced on Monday.

Raytheon announced on Monday that it had received $7.9 million from the Army to develop the round in partnership with the Netherlands Organization for Applied Scientific Research, which is responsible for the design of the ramjet engine.

The XM1155 shell “will be able to strike moving and stationary high-value targets on land and at sea,” Raytheon announced in its Monday statement. “The maneuverable, extended-range airframe will be compatible with legacy and future 155mm artillery systems.”

Raytheon stated that the company would draw on its experience developing guided munitions like the M982 Excalibur guided artillery shell, which soldiers and Marines have been rocking for more than a decade to hit targets up to 20 miles away.

But as The War Zone points out, the ramjet-powered XM1155 will require “a more robust guidance system” to effectively nail moving targets at longer ranges, likely based on “some form of multi-mode guidance” that relies multiple guidance systems mid-flight:

“Multi-mode guidance packages, which can also include laser guidance, are becoming increasingly the default for precision-guided munitions,” The War Zone reports. “In addition to the ability to hit moving objects, this allows for engagement of targets in bad weather and at night and gives the weapon alternate ways to find its mark even if the enemy jams or blinds one or more of the guidance systems.”

That the Army is pursuing a specialized artillery shell is no surprise: long-range precision fires have remained a top modernization priority for the service as the Pentagon pivots from decades of fighting violent extremism to focus on near-peer threats like Russia and China.

But the combination of the XM1155 with the Army's next-generation Extended Range Cannon Artillery presents a revolutionary leap forward in terms of range and effectiveness for the service's artillery capabilities.

This past March, the new XM1299 long-range precision fires prototype cannon nailed a target from roughly 40 miles (65 kilometers) away during a test at the Yuma Proving Ground in Arizona, far outstripping the maximum range of both the M109A7 Paladin (18 miles with a rocket-assisted projectile) and the M777 (25 miles with a rocket-assisted projectile) howitzers.

As Task & Purpose previously reported, the XM1299 will eventually incorporate a fully automated ammo loading system to boost the howitzer's rate of fire from the standard 3 rounds per minute to a blistering 10 rounds per minute.

While impressive on its own, combining the ERCA with the XM1155 is, well, huge: As The War Zone notes, a ramjet-powered artillery shell would boost the range of artillery units from a roughly 1,500 square mile firing area to something like 12,000 square miles, a major boon to units tasked with providing fire support across broad areas while avoiding counterattack from adversaries.

“The ramjet-powered artillery round will allow our nation’s military to strike farther and faster than anything our adversaries have in their arsenals,” said Raytheon land warfare and air defense vice president Tom Laliberty said in the statement.

BAE Systems received a $45 million contract in 2019 to integrate the Army's new ERCA cannon onto a standard Paladin self-propelled howitzer chassis. According to Defense One, the defense contractor aims to deliver the cannons to an Army battalion by 2023.