The U.S. Air Force promised its the nexy generation of the beloved AC-130 gunship would basically be the equivalent of... 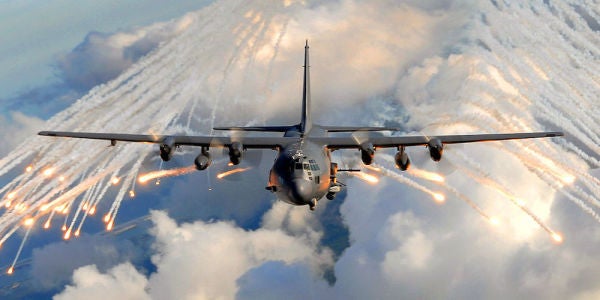 The U.S. Air Force promised its the nexy generation of the beloved AC-130 gunship would basically be the equivalent of a flying Howitzer. It appears the service is making good on its promise.

The Air Force Special Operations Command showed off one of its newly upgraded AC-130W Stinger II gunships during a special ceremony at Warner Robins Air Force Base in Georgia to thank engineers and mechanics, the War Zone reports. The particular AC-130W in question, Spectre 67, is one of the first outfitted with a massive 105mm cannon designed to bolster the gunship’s existing arsenal.

You can see AFSOC vice commander Maj. Gen. Eugene Haase show off the cannon around 0:54 in the video below, courtesy of the DoD:

In 2012, AFSOC announced its intent to field the 105mm cannon on the AC-130W, and while AFSOC has vacillated in recent years over the efficacy of the giant gun, former AFSOC chief Bradley Heithold personally pushed the 105 as an integral addition to the W and the AC-103J, the replacement for the branch’s existing fleet of AC-130H Spectres, AC-130W Stinger IIs, and AC-130U Spooky gunships.

“An AC-130 is a precision strike platform in itself,” Heithold explained in an interview with Breaking Defense. “It precisely delivers very low yield munitions with a 30 and a 105… and they’re very inexpensive to deliver.”

The addition of the 105mm cannon is a deadly supplement the aircraft’s existing 30mm Vulcan gun, guided AGM-176A Griffin missiles, and GBU-30 bombs, among other destructive goodies. “We’ve got a bomb truck with guns on it now,” Heithold told Air Force Times in 2015, dubbing the Ghostrider “the ultimate battle plane.”

Haase’s intro confirms that the “flying Howitzer” method of gunship design is here to stay. The War Zone provides some useful context on the benefits of the side-firing artillery shells compared to more expensive laser-guided ordnance:

Historically, the benefit of the side-firing gunship concept has been the aircraft’s ability to fire very precisely at specific points on the ground. With a gun, crews could shift their focus to new targets much faster than with missiles or bombs and lay down a much higher volume of fire, too. As it stands now, the AC-130W's wing pylons can only carry eight SDBs or Hellfires, though crews can reload the aircraft's Griffin missile launcher in flight. And cannon shells and artillery rounds are just cheaper than precision guided munitions. An 105mm high-explosive round costs approximately $400, while a Hellfire missile can cost up to $100,000, depending on the variant.

From the Vietnam War onward, well-trained gunship crews repeatedly demonstrated their ability to destroy relatively small enemy concentrations while leaving the surrounding areas untouched, even in densely packed urban areas. After its introduction on the AC-130E Pave Aegis gunship in 1972, the airborne 105mm howitzer proved itself to be both particularly deadly and accurate.

We’re still holding out for a laser plane, but the 105mm Howitzer is pretty damn impressive — and, if you’re a jihadi militant looking to start shit on the ground in Iraq or Afghanistan, pretty damn terrifying.