Ever since the Air Force announced the development of the AC-130J Ghostrider to replace older generations of Lockheed Martin’s reliable... 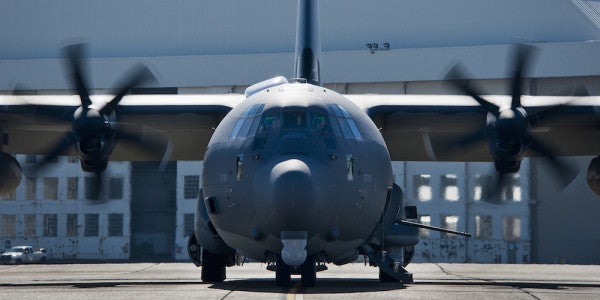 In 2015, AFSOC added a 105mm cannon — basically a fucking howitzer normally reserved for armored ground vehicles — to the rear of the vessel at the insistence of former chief Lt. Gen. Bradley Heithold, supplementing the AC-130’s current arsenal of AGM-176A Griffin missiles, GBU-30 bombs, and a pre-existing 30mm cannon — making the gunship the most heavily armed in the Pentagon’s arsenal.

“We've got a bomb truck with guns on it now,” Heithold told Air Force Times in 2015, dubbing the Ghostrider “the ultimate battle plane.”

While AFSOC only got its hands on its first AC-130J gunship in October 2016, flown from Hurlburt Field to Eglin Air Force Base in Florida to test out that brutal 105mm cannon, Air Force officials are most excited about the Ghostrider’s other big gun: a frickin’ laser beam.

While the use of high-powered lasers to knock out enemy electronics and destroy infrastructure was always part of the mix in the Ghostrider's development, a new report from National Defense magazine says the “directed energy weapon” is “rapidly moving” from science fiction to practical integration with an aircraft at the MIT Lincoln Laboratory. AFSOC officials are amped. From National Defense:

Using a high-energy laser, he aims and shoots at an electrical transformer, the engine of a pick-up truck, communication equipment stacked near the compound’s front door, and a drone sitting in the courtyard.

“We’re no longer talking about bulky chemical lasers, but streamlined electrical lasers,” Webb told National Defense. “These pioneering scientists have honed the ability to combine smaller lasers into a finely-tuned, exquisite single laser. Beam control seems to no longer be an issue. Nor is the cooling technology needed … to keep the system operating.”

A U.S. Air Force AC-130U Spooky gunship soars into the night Feb. 27, 2017 at Hurlburt Field, Fla. The aircraft flew in support of Emerald Warrior, a U.S. Special Operations Command exercise where joint special operations forces train to engage threats across the spectrum of conflict.Photo via DoD

According to Air Force Times, Heithold initially proposed lasers as a countermeasure to enemy missiles, a defensive measure in place of the powerful 105mm cannon. But the idea eventually evolved into an offensive system capable of silently disabling enemy vehicles or infrastructure without firing a shot.

“The technology is ripe for doing this,” Heithold told the Air Force Association’s conference in September. “I’ve got the space, I’ve got the weight, and I’ve got the power.”

AFSOC hopes to see a combat operational AC-130J gunships by fiscal year 2018, with a fleet of 37 Ghostriders ready to bring the pain by 2020. But until then, AFSOC has a significant amount of testing to do: reducing vibrations to ensure a tight beam (!!!), integrating the weapons platform into an aircraft’s electrical systems, even just creating a “window” in the craft body from which a laser beam can actually shoot.

And beyond operational testing, funding challenges remain. Heithold, who left AFSOC in 2016, told National Defense that the Pentagon wants to invest $3.4 billion in directed-energy weapons across the entire DoD, and that the biggest roadblocks to a combat implementation might be the lack of a clear developmental roadmap (or, as usual, bickering).

But despite these potential obstacles, those who have seen the awesome power of the AC-130J Ghostrider are excited to see the gunship, bristling with firepower and futuristic weaponry, terrify enemies downrange sooner rather than later.

“Believe me,” Webb told National Defense, “this technology is quickly leaving the pages of science fiction.”