"What CCTs do is they stitch everything together, and they determine whether everyone on the battlefield lives or dies." 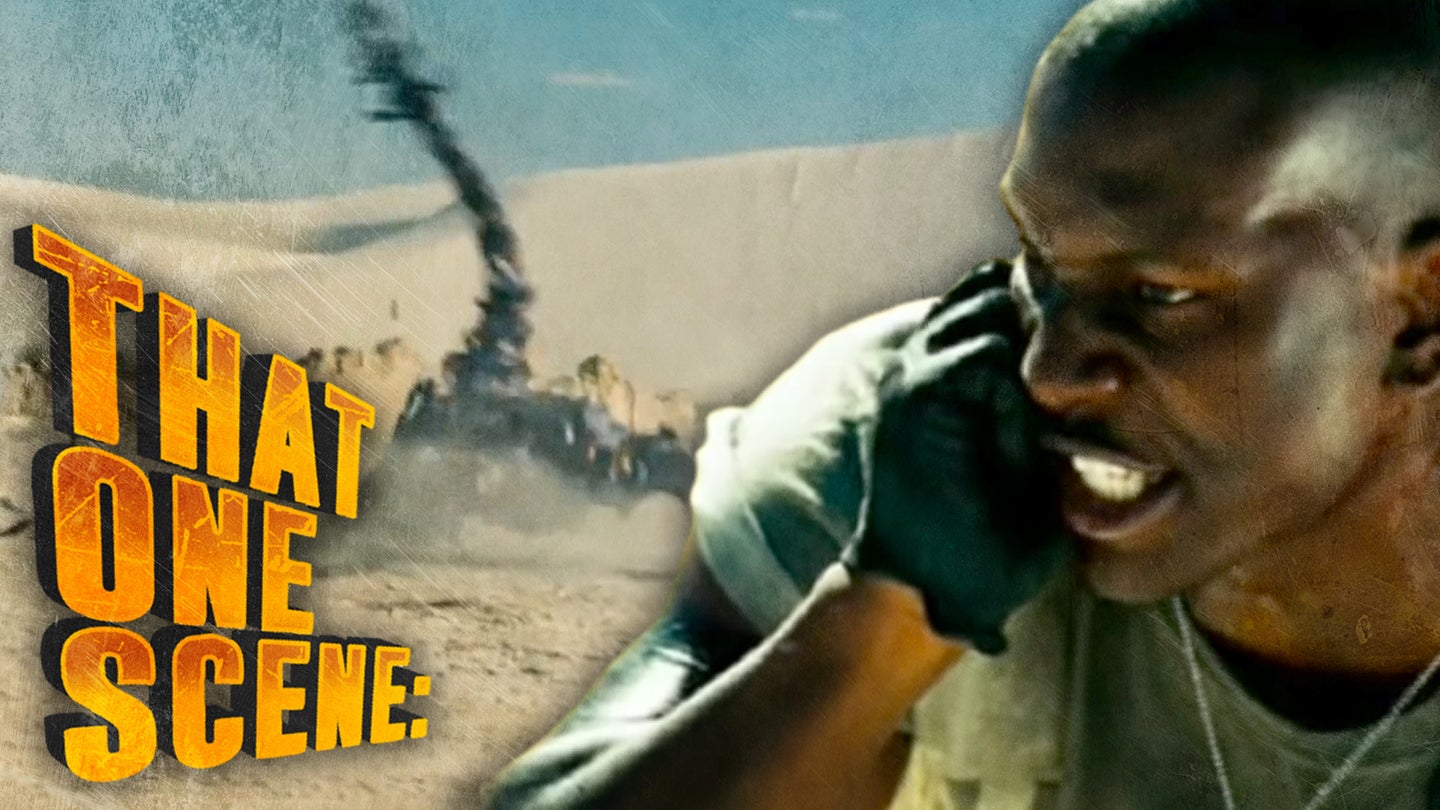 Believe it or not, somewhere in the middle of the spectacular explosions of the 2007 science fiction movie Transformers is a decent depiction of Air Force combat controllers, the special operations airmen whose job is to bring in air support and coordinate air traffic in support of other special operations troops such as Navy SEALs, Army Special Forces, and British and Australian SAS.

Specifically, in one Transformers scene, Tech Sgt. Robert Epps, played by American singer, rapper and actor Tyrese Gibson, calls in close air support on a hostile, scorpion-shaped enemy robot in Qatar. But Scorponok is a tough enemy, and Epps has to bring in munitions from both A-10 Warthog attack planes and an AC-130 Spooky gunship just to scare it off.

We at Task & Purpose love a high-brow take on a low-brow topic, so we spoke with Dan Schilling, a retired Air Force special operations veteran who took part in the bloody 1993 battle now known as Black Hawk Down, to find out what the scene got right and wrong about the serious business of calling in air support.

Schilling literally wrote the book about the CCT community: “Alone at Dawn: Medal of Honor Recipient John Chapman and the Untold Story of the World’s Deadliest Special Operations Force,” a book he co-wrote with Chapman’s sister, Lori Chapman Longfritz, is being made into a movie starring Jake Gyllenhaal.

The following Q&A has been lightly edited for brevity and clarity.

How did you get into the Air Force combat controller field?

I was in the Army originally as a paratrooper and I went on this training trip with some combat controllers and I realized ‘man, that’s where I belong.’ These guys know [High Altitude Low Opening parachute jumps], they know SCUBA, and they worked with everybody in the world. That’s where I belonged, and that’s where I went. It’s the longest, most intellectually-demanding, but just as physically challenging pipeline, in the world for special ops. My class started with 150 guys and when we graduated 18 months later, there were six of us. That’s a 4% success rate, and we’ve worked really hard at trying to improve that, but that’s how I got into combat control.

Right off the top, is there anything about this scene that’s a huge red flag for you?

My first observation is a caveat: this is a dramatization because it’s a blockbuster Hollywood movie. So the drama is going to be foremost, and that’s ok, it’s great. But it doesn’t take away from the fact that I know guys who have been in that situation where they are fighting for their lives. The threat, in this case it’s a robot, is insurmountable, and they’re facing annihilation of their entire team.

This is when combat controllers really earn their pay because they’re the only guy on the battlefield who can do what Tyrese Gibson did in real-life. Or, to put it another way, nobody can do it better than they can. But here are a couple things that stood out right away:

The first thing, as a combat controller, he would never be shouting and raising his voice inflection. Because in real life, the worse it gets, the calmer you need to be. You’re trying to convey the urgency, but it needs to be accurate. So if you’re shouting ‘holy shit, we need to fire right now!’ it doesn’t really move the plane any faster. You calm down and say in a very deliberate and calm way “listen, first pass needs to be this, that or the other.”

Doesn’t the gunfire going around you make it hard to hear over the radio?

Trust me, I’ve been in really big gun fights where you may speak up some, but you really don’t need to shout into a handset. You can cover it with your other hand to keep ambient noise from coming in, but if you had a problem and you needed to speak at a higher decibel, the aircraft would tell you, “hey, there’s a lot of background noise, you’re coming in garbled. Can you please clarify?” That’s your indication as the guy sending the message to do something different, like raise your voice or crunch behind cover. But talking fast is never an answer. You would never say “I need the gunship now!”

I’ll share a story with you, the real story of [Staff Sgt.] Bob Gutierrez, a combat controller who received the Air Force Cross. He was talking to some A-10s in Afghanistan trying to save the lives of his Army Special Forces team when he was shot in the lung. His lung collapsed, but he kept talking on the radio and the A-10 pilot later said, “man, he was talking very clearly. I had no idea the guy I was talking to had a collapsed lung.” And Bob would later say, “I have three minutes before I’m going to die. I’ve got to do something big.”

That’s a real Tyrese Gibson. The drama in that [Transformers] scene was a very real event for Bob Gutierrez.

Have you ever heard of someone using a credit card to call in air support?

Absolutely. It happens, like getting on a payphone during the invasion of Grenada in 1983. It happens because things break down in combat and they don’t go the way that you want them to.

[Though Schilling could not recall the specifics, there are several differing accounts of a Navy SEAL or an Army soldier using a payphone to call for fire support during Operation Urgent Fury. The story inspired a scene of the 1986 movie Heartbreak Ridge.]

One thing that was really realistic and I thought was a credit to the director and screenwriter was that guy on the ground has to be able to call someone for the airpower he needs, and he can’t just call back to a base 1,000 miles away or 500 miles away. He was linked to an AWACS [Airborne warning and control system, the jet with a big satellite dish on top in the Transformers scene], which is exactly what Tyrese did. That AWACS is there to help the guy on the ground, and they coordinate back to the rear. They’re looking at satellite imagery or real-time Predator drone footage feeds. So that was very real.

Do CCTs ever go into battle without head protection and their biceps flexing?

Was the interaction between Tyrese and air support accurate?

In real life, you would be explaining a bunch of things like, “hey I got a mechanical scorpion here, I think that’s a problem. How many scorpions? Well there’s only one.” You’re going to have those kinds of conversations. There’s brevity and efficiency, but what was realistic was that he was direct, like “hey give me some air support,” and that’s the AWACS’ job.

Another thing I thought was interesting, that is drawn clearly from somebody who knows what the hell they’re talking about, was that they had designated kill boxes. A kill box is just a means to mark off some turf on the ground, it’s a way to rapidly target a piece of earth because everybody has already designated it as something that’s going to receive munitions.

The next thing he did that was real was Tyrese threw out smoke to mark his position, and then he put a restriction on those A-10s. He gave them an attack direction: west. There’s more to it in real life but that was very realistic for a movie.

The one thing that’s not realistic is gunships don’t fly in the daytime. They’re a big, lumbering four-engine C-130 that’s flying a circle and it’s just begging to be shot down. At the Battle of Khafji in the Gulf War, that gunship refused to abandon the Marines and stayed after sunrise and it cost them all 14 men on the plane.

When the A-10s are coming in, a bunch of guys are aiming their lasers at the scorpion. Would it take multiple lasers to guide in a munition?

You don’t want multiple lasers, because if you’re Tyrese and you’re responsible for where that bomb hits the ground, you don’t want any confusion, like are the other guys looking at the right thing? Only one guy would be lasing.

It looks like in the scene, the munitions are coming down about 20 feet away. Does that happen on a regular basis?

No that is in extremis. The reason I mentioned Bob Gutierrez before, he was calling in airstrikes from A-10s 30 feet from his position. That is about as close as you can possibly get from a fast-moving airplane overhead. And that’s the expertise of a combat controller. He can do that. Other people may be able to call in airstrikes but they don’t have the expertise to do that under fire and not kill the good guy.

Do you know of other good movies or TV shows that depict CCT life well?

[The movie based on “Alone at Dawn”] is going to be the movie of combat control, because really the answer for combat control is no, we’ve been so hidden throughout our entire existence. That’s why I wrote the book and that’s why we’re making this movie. Nobody knows about us, even though we kill more people on the battlefield than anyone in the history of human warfare. What CCTs do is they stitch everything together, and they determine whether everyone on the battlefield lives or dies. Friend or foe, everybody’s fate is in the hands of this one individual because they are controlling the combat.

That’s a burden because if the mission goes well, and you’re with an Army Special Forces team, for example, it’s like a team effort. “Yay team we all won,” right? But if you make a mistake, everybody points the finger at you alone. It’s like, “Oh the Air Force guy called in that bomb. We didn’t.”

I guess that’s the reason why the training pipeline is so long.

It is. It’s why our standards are so high, and that’s why the burden is so heavy.

Related: Putting warheads on foreheads — This is the gear Air Force combat controllers carry into battle