There are some one-liners in war movies that just stand out. Some of the best include, “Are you not entertained?”... 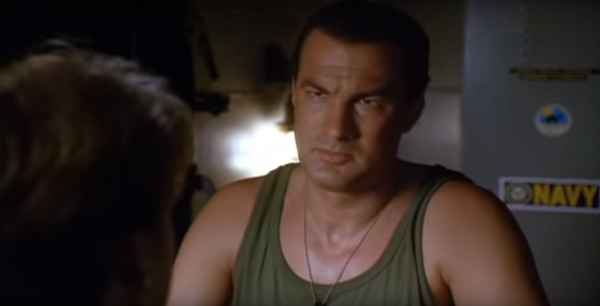 There are some one-liners in war movies that just stand out.

Some of the best include, “Are you not entertained?” from “Gladiator,” and, “I love the smell of Napalm in the morning,” from “Apocalypse Now,” or the tank crew’s mantra, “Best job I ever had” in “Fury.”

These lines are original and fit the character, the scene, and for the most part, they evoke some kind of reaction from the audience.

Then there are the others — the cheap stereotypes of military life.

Whether it’s due to filmmakers lack of imagination or lack of understanding of military culture, there are some lines that need to be dropped from war movies.

Related: These are the 3 battle scenes Hollywood actually got right »

Here are 20 tired and overused one-liners from action and military-themed films.

In war movies, this is typically shouted by enthusiastic troops in the middle of a firefight or by those heading into battle. In real life, the people who would actually be shouting this in combat are too busy being badass professionals.

Characters will say this, or something similar, to acknowledge that they received or understood an order. In real life, however, you usually just say something along the lines of “understood,” “yes sir,” or whatever rank or gender is appropriate, or a service-specific equivalent like “Oorah,” “Kill,” “Hooyah,” or “Hooah.”

There’s no shortage of war movies where troops are ordered to “lock and load” right before an assault or during a battle. It makes sense, but it’s unrealistic. Scenes with heavily armed and battle-hardened grunts chambering a round look really cool and serve as a visual cue for the audience that shit is about to go down. However, troops rarely say this, with good reason. You typically go condition one, meaning you put a round in the chamber as soon as you step outside the wire. So if you’re about to be shot at, you’re already “locked and loaded.”

A character, usually an officer, says this to a junior service member, usually to try to put him or her in their place.

Often heard during period pieces where troops are fighting in line formations, or in the case of the film “300,” when a phalanx of highly trained Spartan warriors are told to hold their ground. Which is odd because you’d think they’d know to stand their ground without having to be reminded — that’s how a phalanx functions after all. It’s kind of like telling troops to aim during a firefight.

This is how new troops are greeted by other characters when they first arrive in a warzone or join a seasoned and battle-tested unit.

In real life, this just sounds campy and melodramatic.

Typically an officer in a movie, or a senior enlisted service member, will say this to emphasize that their word is law.

It’s completely unnecessary and begs the question: How is that order different from all the other commands you issue the rest of the time?

Lines like “the son-of-a-bitch is dug-in like an Alabama tick,” may seem like salt of the earth colloquialisms on paper, but when you hear them in a war movie, they just sound stupid. Really fucking stupid.

This goes double for saying things like “I ain’t got time to bleed.”

Between movies like “Con Air,” “Tears of the Sun,” “Predator,” and “300,” Hollywood makes it seem like getting shot, stabbed, or having an eye ripped out is no big deal.

“That information is classified.”

Characters usually say this to stress the importance or significance of some piece of information, right before they go on to explain what that key information is.

A mortally wounded character, or one about to embark on a suicide mission will say this, or give a note to a friend, just before they’re killed. Another version of this is “Don’t die on me,” and is usually said before someone, well, dies.

Both lines are meant to strike an emotional chord, but they’re so overused that they often come off sounding cheap.

This means to keep cool under pressure, or to stay sharp and aware. Telling a trained service member, or a Marine in the movie “Aliens,” to “stay frosty,” is a bit unnecessary. More often than not, this is used for the benefit of the audience, like a heads up that the situation is dangerous.

“I cannot give that order.”

Usually a character says this after a superior gives a morally dubious order. What happens next is predictable. Said superior shoots, stabs, kills, or otherwise removes the subordinate who challenged his command. Then, the commander tells the rest of the troops to follow the order, and they go along with it, as if seeing their leader murder one of his men didn’t shake their trust in the slightest.

Alternatively, some officer in a movie refuses to do something and just blindly repeats that he “cannot give that order.”

Kind of like this scene from “The Rock” that’s been set to repeat over and over again.

Right before the protagonist goes sprinting into the open, he will announce to his comrades that they should provide covering fire.

Just once, I wish someone would respond, “You know what? No. Because you said that, I’m not going to cover you, you Rambo wanna-be.”

This is used when the bad guys are about to attack the good guys, and is often preceded by some sort of scary sound — scurrying feet, loading of weapons, etc. — that implies the enemy is near, typically making the statement unnecessary.

Just before making a final stand against overwhelming odds, the unit’s grizzled senior enlisted guy, or an equivalent archetype, says something along these lines, but where’s that one guy who raises his hand and asks, “Is it though?”

Great, now I know you’re going to be ambushed. Thanks for ruining the suspense, asshole.

This is shouted just before a ship, bomb, fire extinguisher, whatever, explodes, sometimes killing whoever stood there saying it would blow up instead of just running away or taking cover. War movies are not the only films that overuse this line, it’s everywhere and it’s awful.

“Shut the fuck up, boot, and get out of my movie!” is what I want to shout at the screen whenever I hear this. It’s usually the first thing some junior service member says after arriving on scene and reinforces the image of service members as naive and doe-eyed, wanna-be GI Joes.

Another line that implies military leaders have no control over their troops. Often said when a service member flies off the handle or challenges his superior’s command, this line and others like it, play right back into the same tired stereotype: That members of the military need a firm hand to control them, otherwise they’ll go beserk.