When Oliver Stone’s Vietnam War drama “Platoon,” premiered in December 1986, the cast was concerned it wouldn’t do well. Massive... 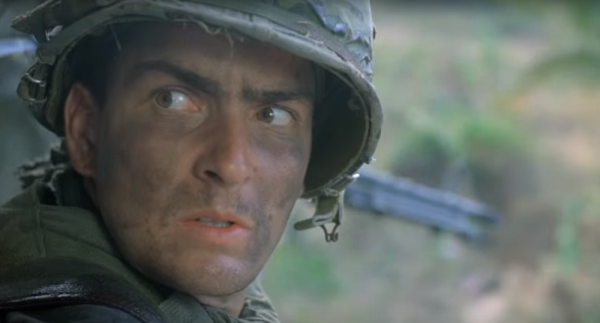 When Oliver Stone’s Vietnam War drama “Platoon,” premiered in December 1986, the cast was concerned it wouldn’t do well. Massive military blockbusters like “Top Gun” had captured movie-goers attention, and for the actors who worked for 54 days in the sweltering heat in the Philippines on “Platoon,” it seemed like the film might go unnoticed. Or worse, the gritty war epic might get mistaken for a bland action movie that only took place in Vietnam, rather than a film about what it felt like to serve there.

Instead, it received critical acclaim, almost immediately. That year, “Platoon” won the Oscar for Best Picture, and Stone won an Oscar for Best Director.

Stone began writing the script in 1969 and after multiple rewrites and a few failed attempts to secure funding, filming began in earnest in 1986. Shot in under two months, the film cost roughly $6.5 million, a shoe-string budget for a major war film.

The movie was inspired by Stone’s experiences as an infantryman in Vietnam, where he served from September 1967 to April 1968. Stone received a Purple Heart for wounds sustained in combat and was awarded a Bronze Star Medal with a “V” device for valor.

The movie focuses on a ragged group of soldiers — a mix of draftees, misfits, idealists, and pessimists thrown together in a hellish environment. The characters fight among themselves as much as they fight an elusive enemy.

Beyond capturing the low morale of troops fighting a war that feels unwinnable, it’s also a master-stroke of filmmaking. Here are 10 obscure facts you might not know about “Platoon.”

The filming of “Platoon” was almost canceled due to a revolution.

The filming was almost canceled due to political upheaval in the Philippines when then-dictator Ferdinand Marcos was deposed and fled the country in February 1986. In an interview with The Guardian, Willem Dafoe, who played the war-weary and compassionate soldier Elias, in the film, explained that he was the first to arrive. After his flight he decided to take a nap in the hotel.

“When I woke up I opened the curtains of my room and there were tanks out in the street, and I thought, ‘Oh man, what's going on?’” he told The Guardian. “I checked out the TV and sure enough there was a revolution and I was stranded there as I was one of the first actors there and I was told that the film was not going to be happening and I couldn't leave. That was an interesting way to start the movie.”

In the scene where everyone gets really high, they were all actually stoned.

According to an interview with Dafoe for the documentary “Making of Platoon: A Tour Of The Inferno,” some of the actors wanted to get into character for the scene where the platoon gets nice and lit. So, they gathered the weed they could get their hands on and got stoned on set.

The plan didn’t go so well, though. When it came time to shoot, the actors had either come down from their high or were so out of it they were useless.

It was Johnny Depp’s first time outside the states.

Aside from being Johnny Depp’s first role in a major movie, the film was shot in the Philippines and it was Depp’s first time outside of the United States.

Prior to “Platoon” Dafoe had traditionally played villains, something Dafoe said he was particularly conscious of. Tom Berenger on the other hand, was often cast as a sympathetic hero or anti-hero, but in the film, the two took on different roles than they were used to.

Dafoe played Elias, a soldier that was set in sharp contrast to Berenger’s character, Sgt. Barnes, the cold-blooded platoon sergeant.

In an alternate reality, “Platoon” may have starred Jim Morrison.

After Stone wrote the first draft of “Platoon,” in 1969, he sent it to the Jim Morrison, the lead singer of the Doors. Stone wanted Morrison to play the part of Chris Taylor, the lead role that Charlie Sheen would ultimately play. The script was in the singer's possession when he was found dead in Paris in 1971.

This photo image of Jim Morrison is from the Smother's Brothers Show, 1968.

Dafoe drank contaminated water and hallucinated for a full day.

During the filming, the actors were warned not to drink from the river water for fear of malaria, but Dafoe filled his canteen with fresh water, dropped a purification tablet in and drank. As the cast moved further upstream, they found a dead pig rotting and bloated in the center of it. Dafoe was extremely sick and delirious for the following 24 hours.

Charlie Sheen almost lost the lead role to his brother.

During one of Stone’s early attempts to get the movie made, Sheen auditioned for the role and failed to impress Stone, who was actively trying to cast his older brother, Emilio Estevez, for the part. However, financing fell through and when Sheen read for the part again a few years later, Stone was taken by surprise.

“The first time around,” Stone said in an interview with People. “Charlie was a kid. He was thinner, he hadn't filled out. But this time I knew in 10 minutes he was right.”

The film’s military advisors ruthlessly screwed with the actors during boot camp.

Two weeks prior to shooting the movie, Dale Dye, a military technical advisor and a Marine veteran of the Vietnam War, ran the actors through 14 days of training. The actors had to refer to each other by their character’s names and ranks, carry all of the gear their character’s would carry, and fulfill the duties and responsibilities of their characters.

In a documentary about the making of the film Depp talked about falling asleep on post and waking up with Dye pressing a gun to the back of his head, whispering “you’re dead, Johnny.”

Because the movie was shot sequentially, as the platoon in the film took casualties, the cast size began to shrink. By the end of shooting, only a handful the original actors remained on set.

A YouTube screenshot from the documentary “Making of Platoon: A Tour Of The Inferno” shows, Charlie Sheen, Tom Berenger, and Willem Dafoe on set in the Philippines.

It gave an added effect of loneliness and a sense of loss to those still on set, explained John C. McGinley, who played Sgt. O’Neil in the movie.

“It was getting very strange,” said McGinley. “Those guys are gone, they’re out of sight, out of mind. It’s like they’re dead.”

In the closing scene, after Sheen’s character kills Barnes, he can be seen holding a hand grenade as he sits on a mound of sandbags. When his fellow soldiers approach, Sheen drops the grenade.

“What I’ve done, is I’m holding the grenade and I’m about to pull the pin when he comes through, and do myself,” Sheen said in an interview about the making of the film. “I didn’t tell Oliver I was going to do this, but I looked at him afterward and asked him ‘does that work,’ and he said ‘don’t change a thing.’”