Quentin Tarantino’s “Inglourious Basterds” is a bit like “Pulp Fiction” meets “Band of Brothers.” It’s an unhinged, wild, and violent... 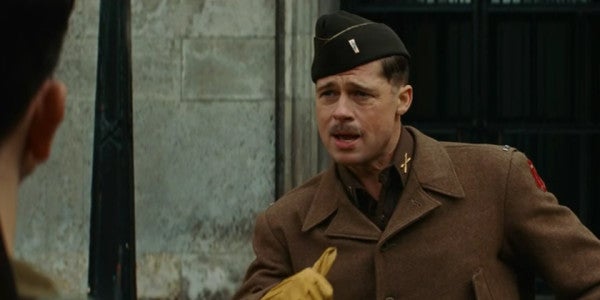 Quentin Tarantino’s “Inglourious Basterds” is a bit like “Pulp Fiction” meets “Band of Brothers.” It’s an unhinged, wild, and violent film with at least one notable, and deeply satisfying, deviation from history. In case you don’t know, Hitler dies at the end, along with tons of Nazis.

The story behind making the film is no less wild.

The film follows multiple characters, from the Nazi-killing, all-Jewish guerillas after which the film is named, to the insidious but disturbingly charismatic Nazi SS officer, Col. Hans Landa, played by Christoph Waltz. In true Tarantino fashion, type casts are toyed with before being swiftly, brutally put down. Shosanna Dreyfus, played by Mélanie Laurent, goes from tragic victim after her family is killed at the start, to survivor hiding from German soldiers in Nazi-occupied France, to master assassin with a plan to take out the leadership of the Third Reich.

Tarantino toyed with the idea of the movie for nearly a decade before he began working on it, and in May 2009, the film premiered at the Cannes Film Festival, where it was booed and took some heat for deviating from history, because apparently killing Hitler is a bad thing.

It’s okay, they booed “Pulp Fiction” as well, so what do they know?

The film went on to earn $120 million, became an instant cult classic, and put Christoph Waltz on Hollywood’s radar. He received an Oscar for Best Actor in a Supporting Role, though he had been a well-known actor in Germany since the 1980s.

Here are 10 things you may not have known about Quentin Tarantino’s “Inglourious Basterds,” starting with why it’s misspelled.

These aren’t the first inglorious bastards.

Quentin Tarantino took the title from the 1974 war film, “The Inglorious Bastards,” by Enzo G. Castellari. The original follows a group of dubious American soldiers during World War II who through misadventure and mishap, end up on a covert mission to steal a German V2 rocket, and wreak havoc behind enemy lines.

Tarantino deliberately misspelled his version to distinguish it from the original and to have greater latitude in remaking the film.

Aldo Raine is operator as fuck.

When Brad Pitt’s character Aldo Raine is introduced, he is shown wearing the insignia for the 1st Special Service Force or the “Devil’s Brigade” which was composed of both Canadian and American soldiers during World War II. The unit was trained in guerrilla warfare, which explains Aldo Raine’s unconventional, yet highly effective tactics

Only a third of the movie is in English.

Roughly one-third of the film is actually in English, with the rest in German, French, and even some Italian. Additionally, the actors actually spoke the languages their characters do in the film — Christoph Waltz, Michael Fassbender, and Diane Kruger are all native German speakers. This was done to add an air of authenticity to the film, and had the added effect of making Brad Pitt’s character more believable due to his botched attempts at Italian.

Unlike most World War II movies, there’s not a single battle.

“I never had any intention of doing a battle scene or including a single tank,” explained Terrantino, in an interview with TimeOut.com “That shit bores me. Cannons and climbing rocks and dynamite, that bores me. I would be bored to tears shooting that, getting the tanks to roll. I’m much more interested in the humanity, the suspense.”

Hugo Stiglitz is in the business of killing Nazis.

Til Schweiger, the German-born actor who played Hugo Stiglitz, a German ex-soldier who went rogue and killed SS officers for fun, previously refused roles that required he wear a Nazi uniform, with the exception of course being Tarantino’s film.

The reason? Because he got to kill Nazis.

Christoph Waltz’ son is a rabbi.

Christoph Waltz, the actor who played the infamous “Jew Hunter” Col. Hans Landa, has a son who is a rabbi.

The glove guns at the end are real.

As odd as they look, the guns that characters Omar and Donnie,the two remaining basterds at the theater, use to storm Hitler’s box at the end of the film are real. Called Sedgley OSS .38s, they were originally designed as last-resort weapons for U.S. Navy construction crews in the Pacific.

The Bear Jew is a Masshole.

Eli Roth’s baseball-bat wielding character Donny Donowitz was based on the guys based he used to know in Boston, Massachusetts, whom Roth describes as “Massholes,” he explained in an interview with Jake Hamilton.

Roth had to put on 35 pounds of muscle for the role. To get in the right mood for the scenes where he’d bash in Nazis’ heads, he would deliberately put himself in a dark mood, often leaving the actor exhausted on days where he had to “kill a man.”

There’s a lot going on with Donny Donowitz’s Bat.

In a scene that was cut from the finished movie, Jewish elders sign the bat that Donny takes with him to war.

“And he’s fighting for those who can’t fight and those who were in the camps,” explained Roth, in an interview with SlashFilm.com. “He really feels like a Jewish warrior, and this bat is his sword.”

The film shown during the final scenes is an actual movie.

Roth also directed the film “Nation’s Pride,” the Nazi propaganda movie in “Inglourious Basterds” that lures Hitler and his high command to the theater. Roth directed the film at Tarantino’s request and shot multiple sequences and scenes so it looked like parts from a full-length film.