When it comes to pop-culture allure and romanticized brutality, Stanley Kubrick's “Full Metal Jacket” is arguably the most influential of... 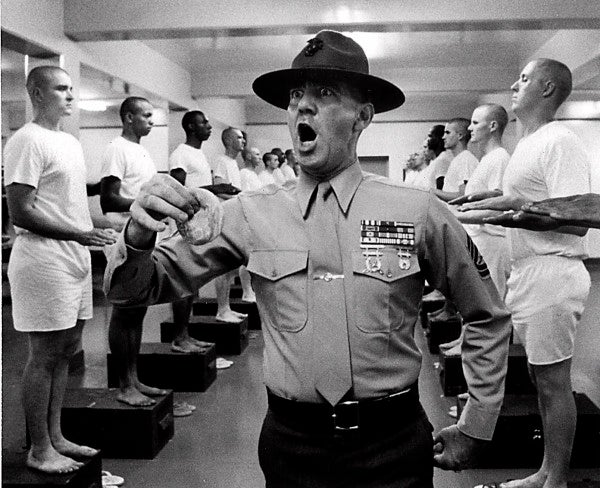 When it comes to pop-culture allure and romanticized brutality, Stanley Kubrick's “Full Metal Jacket” is arguably the most influential of all Vietnam War movies. R. Lee Ermey's iconic portrayal of the sadistic Gunnery Sgt. Hartman has served as a de facto recruiting mechanism for the Marines since the film's release in 1987. I remember watching the same VHS copy of “Full Metal Jacket” about a hundred times before I enlisted as a Marine combat correspondent, choosing the same military specialty as Private Joker. During the 10 years I served in the Corps, it was a rare occasion to find a Marine who didn't love the film.

Despite FMJ's widespread popularity, there is a crap-ton of behind-the-scenes drama and literary awesomeness from the original novel that gets missed if you've never looked into the film's backstory. Consider this list the enthralling special-features bonus DVD you never saw.

1. The book is better. Okay, yes, this is an opinion, but hear me out. FMJ is based on the novel “The Short Timers” by the late Gustav Hasford, aka, the real Joker. Hasford drew from his experience in Vietnam as a Marine correspondent with the 1st Marine Division to develop the novel. After the book's release in 1978, Newsweek's Walter Clemons called it “the best work of fiction about the Vietnam War.” The film is brilliant, yes, but Kubrick — beholden to studio execs at Warner Bros. — had to cater to mainstream sensibilities, which is why the brutally macabre third and final section of the novel never made it to the screen.

2. Civilian correspondent Michael Herr shared a screenwriter credit with Hasford and Kubrick. “Dispatches” is Herr's memoir about his time as a civilian correspondent for Esquire from 1967 to 1969. Herr's book is a masterpiece of literary nonfiction. While the vast majority of the dialogue in FMJ is taken straight from Hasford's book, the psycho door gunner's darkly comic dialogue is pulled from “Dispatches,” which you may or may not find disturbing in light of the fact that Herr's book is nonfiction.

3. There is a psycho-door-gunner scene in both “Dispatches”and “The Short Timers.” Noticing this, I briefly wondered if Hasford might have “borrowed” from Herr's book or if there were just a lot of psycho door gunners on Marine helicopters in Vietnam. I lean toward the latter possibility since the scenes' similarities are negligible and the differences distinct. Hasford's gunner, for example, wears a Hawaiian sport shirt and smokes weed while eagerly wasting Vietnamese farmers in the hamlet below.

4. Hasford wrote a sequel to “The Short Timers” called “The Phantom Blooper.” In “The Phantom Blooper,” Joker spends a year as a POW in a Vietcong village and eventually comes to sympathize with his Vietnamese captors. After he is rescued, he turns against the war and his government. Blooper was supposed to be book two of a trilogy, but Hasford died a few years after publishing it.

5. The peace symbol/born to kill scene is derived from a short story Hasford wrote in community college after the war. The short is called “Is that you, John Wayne? Is this me?”

6. Gustav Hasford called R. Lee Ermey “a fucking pogue lifer.” Kubrick hired Ermey as a military technical advisor on FMJ. Ermey's background as a Marine drill instructor caught Kubrick's attention, and the director recast Ermey in the iconic role of Gunnery Sgt. Hartman. Hasford, who had campaigned to have his friend Dale Dye be the film's technical advisor, decried Ermey as a shill for the Marine Corps' pro-war propaganda machine. (Hasford had a well-known mean streak that often manifested itself in letters he wrote to Kubrick or others he felt had wronged him).

7. Kubrick kind of tried to screw Hasford out of a screenwriting credit (and a lot of money). This (abridged) letter Hasford wrote to his friend Grover Lewis in 1985 explains:

(July 14—return address c/o Michael Herr) … Here in London the Great Movie Wars … are going hot and heavy. The situation is very complex, but the basic issue is one of screen credit. I've pretty much written Stanley's movie and Stanley has added a few minor things, but essentially the screenplay is by me. But Stanley wants to give me an “additional dialogue” credit … He threatens to pull the plug on the whole thing. Meanwhile, I am refusing to sign my screenwriter's contract.

8. Hasford won his battle with Kubrick. Hasford's friends kept telling him he was over his head tangling with one of America's most beloved filmmakers and his Hollywood backers, but Hasford never flinched during his year-long battle. He announced his victory in a letter to Grover Lewis in 1986:

(May 20—from Perth) … In the cynical world of L.A., where show *biz* deals are conducted in the back alleys of cocktail parties like self-parodying out-takes from a comedic film noir, you might want to interject this lively note … I won my credit battle with Stanley, I beat Stanley, City Hall, The Powers That Be, and all of the lawyers at Warner Brothers, up to and including the Supreme Boss Lawyer. As a little Canuck … friend of mine would say: I kicked dey butt …

9. FMJ was filmed in England. No, really. Stanley Kubrick somehow managed to make England pass for Vietnam. I feel like that should be the ultimate test in some master-filmmaker gauntlet that directors have to pass before they can be called “masters.” Like, “Congratulations, Mr. Aaronofsky, Mr. Fincher, Mr. Nolan. You've made it to the Vietnam-in-England Test, aka, the Kubrick Rubric.”

10. This type of upward POV shot is one of Kubrick's visual calling cards. He uses it in the second half of the film when the Lusthog Squad survivors are standing over their dead bros, saying a few words. Also look for it in “The Shining,” “A Clockwork Orange” and others. And if you're a Quentin Tarantino fan (who isn't, right?), definitely watch this mashup showing Tarantino's affinity for the same type of “from below” shot. (Bonus: one-point perspective is another Kubrick signature captured brilliantly in this mashup from “Kogonada” on Vimeo.)

Bonus fact: Writing for L.A. Weekly after his friend's death from diabetes in 1994, Grover Lewis found this gem of a “Gus story” from Steve “Bernie” Berntson:

I'd set up a base camp in Hue City, and Walter Cronkite rolls up with a camera crew. He was doing a stand-upper with some pogue colonel, asking about rumors that our guys had been looting. Just then Gus busts in with two black onyx panthers and a stone Buddha on his back. “Hey, there's a whole temple full of this shit,” he hollers. “We can get beaucoup bucks for this stuff in Saigon!” I hustled him outside quick, and Cronkite, of course, came back home and declared the war unwinnable on national TV.

Long live the Marine combat correspondent. We'll make you famous. You can read all of Gustav Hasford's books online here.