Here Are The Funniest Punishments Ever Handed Down In the Military, According To The Internet

These are so good. Anyone who has served in the military has great stories from boot camp, deployments, or military... 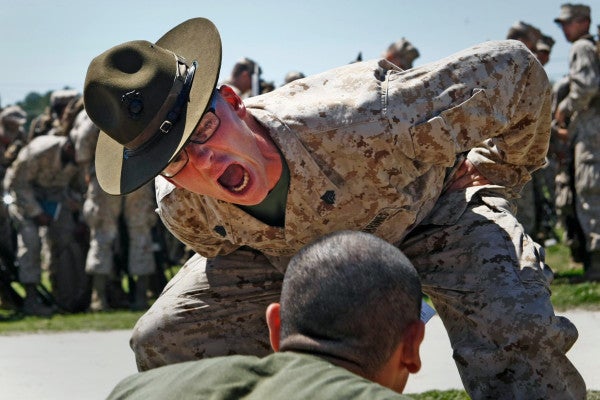 These are so good.

Anyone who has served in the military has great stories from boot camp, deployments, or military life.

A recent thread on Reddit asked “Military personnel of Reddit, what’s the best/weirdest/funniest punishment you’ve seen handed down by a superior?”

The rigorous authority and rank structures of the military are notorious. Give a lot of young, motivated people a little bit of authority, and watch what funny stories they come up with.

Check my favorite answers out below and tell us your funny story in the comments.

(Responses have been edited for profanity and clarity.)

One of the first days in basic a guy in my platoon was standing at attention while having his room inspected by the instructor.

It didn’t matter how nice his room was because there was a large piece of fuzz/fluff on his shirt that immediately drew the sergeant’s attention.

Imagine a female, French-Canadian, sergeant with this accent.

“Recruit Bloggins! What is that on your shirt?! Is that a fluffy!?”

“Why is there a fluffy on your shirt, Bloggins!?”

“I must have missed it, sergeant!”

“Missed it? It is so huge, how did you miss such a big fluffy!?”

She picks it off of him. “Hold out your hand.”

He holds out his hand and she places it in his palm.

“This is Mr. Fluffy. Find a home for him, like a pill bottle or something. From now on, whenever I want to see Mr. Fluffy you must bring him to me.”

And so, for the rest of basic, every time the sergeant found a piece of fuzz she would yell out, “MR. FLUFFY!” and Bloggins would have to march over to her and present Mr. Fluffy and she would formally hand him the new piece of fuzz to add to Mr. Fluffy. There was hell to pay if he didn’t have Mr. Fluffy with him at all times.

There was a time when we made a private sweep all the sunshine off the sidewalks. It took the poor guy all day.

Marine Corps boot camp, one kid on firewatch failed to notice the drill instructor coming on deck (which means you immediately salute and report your post), so the DI ran up to the rifle rack, smacked it, and yelled “BAM! You’re dead.” He tried to respond, but was cut off by the DI: “You’re a ghost now, you can’t talk. Go act like a ghost.”

Then the kid had to wander around the squad-bay for the rest of his two-hour firewatch acting like a ghost, and he took that responsibility with a stride. Plenty of ridiculous “oooOOOOOoOOOOo i’m a ghooOOooost” noises and f—ing with people’s racks. We were all laughing our asses off for the next hour till our senior drill instructor got pissed.

Replacing the oxygen he stole from everyone else, by Tain01

A service member was a total f—up, to put it gently. Couldn’t be on time, couldn’t show up dressed to standards, constantly forgot professional courtesies, so on. When he was on his last straw, his squad leader pulled him aside and more or less started yelling, then stopped himself.

“No. You know what? I’m done yelling at you. It doesn’t work. Stay right here; don’t go anywhere.” He stormed off into the company building. The phrase, “stay right here, don’t go anywhere” is typically the precursor to something horrible happening when said in anger. The squad leader eventually emerged carrying a small-ish potted tree, which he handed to the service member.

Probably the funniest punishment I’ve ever seen, and we’ll never see it again (because you’re not allowed to do that).

We had a guy that somehow got his watch through the indoc (They take all your crap when you first get there). Well, the Drill Instructors found out he had it when they saw him wearing it one day, so they put him in the squad bay trashcan and put the lid on it. Every time they walked by and kicked it he’d pop out with his watch and yell, “SIR THE TIME ON DECK IS ZERO-NINE-FORTY-FIVE!” and then go back into his can like the freakin’ grouch from Sesame Street.

It was really, really hard not to laugh at that.

A recruit in Marine corps boot camp thought he was special because he was an eagle scout. The Drill Instructor picked up on this and during Physical Training took him into the woods and made him build a nest. Then he had to squat over it in order to keep his eggs warm.

Saw a guy on a full-body waiver for exercises. The instructor gave him 1,000 smiley-frownies… (smile, then frown is 1). The hardest/easiest exercise ever.

Edit: for those who don’t know, a full-body waiver is something to the degree of: Cannot lift objects, no walking for more than 200 meters in one setting, no strenuous activities, etc. Basically making all normal physical activities out of the question.

The “suicidal” private caught messing with a girl in basic,by epochellipse

I was in a gender-mixed company in basic. The third floor of the barracks was split with females on one half and males on the other. Males were not allowed in the female half and vice-versa. My platoon was out back practicing throwing grenade bodies and a window on the female side of the third floor opened and a male snuck out of the window onto the ledge. It was immediately obvious to everyone, including our drill sergeant, that he had been in there messing around with a female and another drill sergeant must have come down the hall, forcing him to get out on to the ledge so he wouldn’t get caught. Our drill sergeant looked at the guy for a minute and then yelled really sarcastically, “don’t do it private, you have lots to live for.” Then they put him on suicide watch, and made him hand over his belts and tie and shoelaces and everything that he could hang himself with, and made him drag his newly bare mattress out into the hallway next to the fire guard desk and sleep out there every night until we graduated four weeks later. And they made his battle buddy sleep on the floor next to him for the first week.

Another oldie but goodie is making a private hug a tree. It all depends on how you take it. Some privates thought it was funny to have to hug a tree, but for some reason some of them thought it was really embarrassing.

My brother told me that when he was in basic, a Drill Sergeant yelled at this guy to “beat his face”, meaning to do push-ups. Said guy had no clue it meant that, and promptly punched himself in the face, really, really hard, and fell to the ground. The Drill Sergeant had to walk that one off and my brother said you could hear him laughing hysterically as he walked behind a building. Not totally relevant, but I figured I’d share.

There was a pool of tears from laughter on the floor below me.

I saw a guy be forced to slow dance with a mop for one hour straight.