There Are Some Things Only EOD Can Get Away With 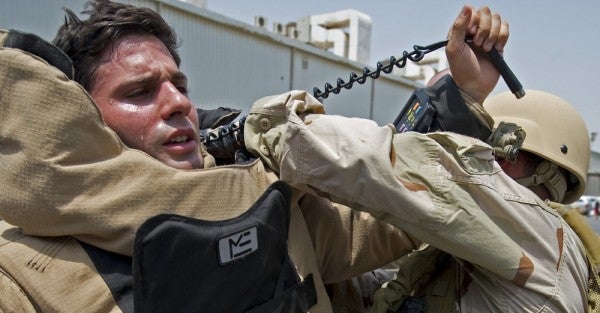 Highly trained and with nerves of steel, explosive ordnance disposal technicians sometimes get a bad rap because they play a little fast and loose with grooming standards and uniform regulations, occasionally coming across like this:

Related: Here’s Why ‘The Hurt Locker’ Is The Worst War Movie Of All Time »

Haircuts, uniforms, and all that other bullshit aside, they are professionals when and where it counts, explains Matt Lutz, a former Navy explosive ordnance disposal technician and a combat veteran who served in Iraq and Afghanistan.

Navy EOD techs like Lutz receive additional schooling because of their role in Navy special operations units, he explains. In addition to going through the standard year-long EOD course, Navy EOD technicians attend a nine-week dive school at Naval Diving and Salvage Training Center in Panama City, Florida. There, they are trained on mixed-gas rebreathers, which is a closed circuit that cleans carbon dioxide out and puts oxygen back in. That means there’s no bubbles, which is important if you’re disarming an underwater mine.

“You know whenever you scuba dive, the bubbles ‘wump wump wump,’ they make an acoustic signature, which can set off the underwater ordnance,” explains Lutz, who left the Navy as a petty officer second class in 2013 after six years of service. “So you don’t want that if you’re disarming underwater ordnance.”

In addition to explaining the role of Navy EOD, Lutz spoke with Task & Purpose about what it’s like to be part of such a tight-knit community and what happens when explosives experts get bored on deployment.

Is there a culminating event in EOD school that solidifies your identity as an EOD technician?

It’s definitely getting your crab, the EOD badge. We call it a crab because you know, it looks like a crab.

We have one of the longest training pipelines in the military, especially with Navy EOD because we go through a lot more training than the other branches. At the ceremony and everything, whenever you get your EOD badge pinned on your chest, you’re an EOD tech and you’re part of the community now. Your instructors aren’t going to be yelling at you anymore — you’re now brothers.

What would you say was the toughest part and your favorite part of training?

EOD school is both very mentally taxing and very physically taxing. It’s also about a year long, about a year, year and a half. It’s tough being that mentally, not beaten down, but mentally worn out I guess, and physically you’re working out real hard everyday. Then after that you go and sit in a classroom all day, then get tested on it. It’s grueling, just across the board.

One of my favorite things about EOD school, and being Navy EOD in general was diving. I really enjoyed diving, it was a lot of fun. It was kind of cool, despite the instructors yelling at you, beating on you and everything — “beating on you” is what we say for PT, they’re not actually beating you — but, even when they’re doing that, you kind of have a jovial joking mentality.

What are some things that only EOD techs can do?

There was a lot of stuff that the big blue Navy has to do, that I just have no idea what they’re talking about. Like you mentioned working parties?

[Laughing] We never do any of that crap. Because, we only answer to ourselves. This is not all of EOD, this is specific to Navy EOD. Like whenever we were in Afghanistan, the only boss I had was on my team. He was an officer, but I was a more senior EOD tech. I was his boss, and he was my boss, so it was pretty cool. The Army guys we were working with, I didn’t answer to any of them. So, like one time this first sergeant was giving me shit about the sweatpants I was wearing and I was preparing to tell him to go fuck himself, but my OIC, he stepped in. He told me to be quiet and he started talking to the guy, and he, in not so many words, told him to go fuck himself, but respectfully, or whatever. It was funny.

Within EOD because we have a very specific skill set, I feel like we can get away with doing or not doing whatever we want. … So it’s pretty cool.

Like when I was in Afghanistan, they made all the Army guys go to chow in their uniforms, carrying a weapon and all that, and we’re like, “No, we’re not doing that.” We’d go in PT gear and wouldn’t carry a weapon. Also, we had like huge beards, so there’s also that. At the end of the day, it’s like: “Hey Army, I don’t answer to you. If you want me to help you, you want me to disarm IEDs for you: Leave me the fuck alone.”

We don’t play the fuck-fuck games that I’ve noticed a lot of the Army and Marines do.

Yeah, oh yeah. Like stateside, obviously we don’t grow the beards out and we grow our hair a bit longer, as long as it’s not outlandishly out of regs, nobody really cares. I have several Marine buddies — I actually had hair and they could only have their high-and-tights.

We also joke around within special operations, Navy guys, before we go on mission we have to put product in our hair. We have little sayings like that or “tanned fat is muscle” or like “why do we work out? Because the chicks dig it!” Just that kind of shit.

I’ve heard stories of EOD techs playing tricks on each other, like rigging a keyboard or a chair to go off on somebody. Have you ever done that?

So yeah, we never really did that shit to each other, but we would do it to the Army guys or Marines, on deployment, just to uh, fuck with them. They never knew who it was. We have these things, electric squibs, they just pop real loud and you basically set up an IED, like set a pressure plate under a doormat or something and whenever somebody steps on it, it blows the electric squib. We did that.

There was also Army EOD in Iraq when we were turning over so we rigged their building with that, but with a loud woo woo woo siren thing and they just started using it like a doorbell. So that was kind of funny.

I’ve heard there’s this tradition of EOD guys buying their buddies beer if they show up in an article or in the news. Is that a real thing?

Oh yeah. If you get put in an article … Especially after “The Hurt Locker” there was a lot of TV shows that wanted to interview us … that kind of stuff, yeah. If you were in the Navy Times or something, the first person to call you out, you have to buy beer for. Yeah.

Are you going to owe anyone a case of beer after this?

Uhh, not now because I’m out. So fuck off everybody.