On Jan. 20, the day he swore into office and assumed the role of commander-in-chief, President Donald Trump vowed to... 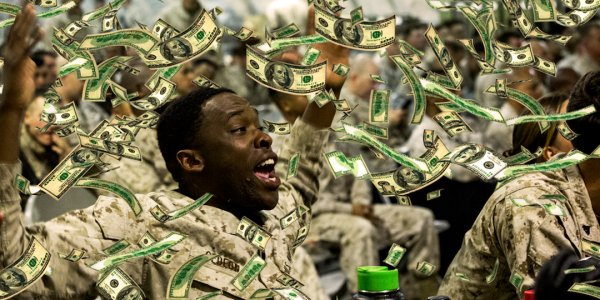 On Jan. 20, the day he swore into office and assumed the role of commander-in-chief, President Donald Trump vowed to rebuild America’s “depleted” armed forces. Now, the military is holding the new president to his word. Last week, Pentagon officials delivered to Congress a plan for increasing the defense budget by more than $30 billion to acquire new jets, armored, vehicles, improved training, and more, according to the Associated Press.

That’s great and all but what about the cool stuff? Yes, I get that we need to keep our country safe, etcetera etcetera, but $30 billion is a ton of money. That’s enough for everyone to get a little piece of the pie. So, here’s what I’m proposing: Kick some of that sweet moolah down to the guys and gals in the trenches. Take just a tiny fraction of that money — say, $5 or $10 billion — and spend it on things that the people who put on the uniform every day will actually benefit from and enjoy.

A Rip-It Faucet In Every Barracks Room

This is really a no-brainer. Forget what the “scientists” and “doctors” say, we all know that increasing caffeine assumption is the key to a more effective fighting force. The last thing a soldier needs to do first thing in the morning is drink water, which is devoid of essential nutrients like taurine and ginseng. It’s really a waste of bladder space, if you ask me. This is why we must immediately remove all of the water tanks in the barracks and replace them with giant reservoirs of Rip-It energy liquid. This will lead to an extreme spike in productivity, speed, and focus throughout the ranks, and also enable service members to work 24-hours a day, seven days a week.

Imagine this: You’re a soldier and you’re hungry. You go to the chow hall and … meat loaf again? Booooooring. So how about we spice things up a little — like, literally spice things up with authentic Mexican tacos, every Tuesday. Personally, I’m a big fan of carne guisada, so those would definitely have to be on the menu. But there could be something for everyone: chicken, steak, pork, fish — hell, even shrimp. To liven up the spread, I’d also suggest including a salsa bar with at least 10 different types of delicious homemade salsas and fresh guacamoles. Oh, and, speaking of salsa, a live mariachi band should also be present so after dessert (flan, of course) everyone can salsa dance.

A 50-Foot Statue Of Mattis In Downtown Kabul

It’s been more than 15 years since we toppled the Taliban regime and won the invasion of Afghanistan, but looking around the streets of Kabul you wouldn’t guess it. That is why, without further delay, we must erect a 50-foot statue of James “I Go By Jim” Mattis in downtown Kabul. Obviously, he should be riding something — a white steed, perhaps. Or better yet: a tiger. He should be shirtless and wielding a battleaxe, a symbol of the mighty military he commands. This will do two things: One, look awesome. And two, let our enemies know that we WILL FUCKING DESTROY THEM.

Walking is a pain of the ass and when you’re in the military you have to do a lot of it. There’s an easy and relatively cheap solution for this: military-issued tactical rollerblades. Not only do ’blades keep your leg muscles in tip-top shape, but they also allow a soldier to move swiftly and silently, like the wind. And there’s also an obvious battlefield application here. Think about it. Instead of running, which strains the knees and jostles the bowels, soldiers can glide across the battlefield, maintaining steady aim with their rifles as they descend upon their foes. Hemingway once said that courage is “grace under fire,” and there’s nothing more graceful than a platoon of infantrymen rollerblading into battle.