10 Questions Only A Veteran Would Ask UFC Fighter Tim Kennedy

As a U.S. Army Green Beret and a top contender in the UFC, few people on Earth are better versed... 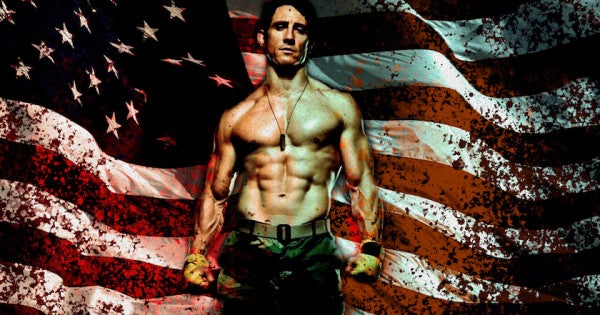 As a U.S. Army Green Beret and a top contender in the UFC, few people on Earth are better versed in the sacred art of kicking ass and taking names than Tim Kennedy. He’s the guy terrorists tell their children about to scare them into saying their prayers at night. But what makes this gunslinger really tick? Read on to find out.

Well, I was never a private. I came straight into Special Forces. But as a trainee: There’s a rivalry between Rangers and Special Forces recruits, and when we were toes on line in the barracks, I fought four of them at the same time to try to bring respect the Green Berets, even though I wasn’t even a Green Beret at the time. That was idiotic.

3. The zombie apocalypse kicks off, what’s the first thing you do?

Try to hide my boner.

4. Finish this sentence: You shouldn’t join the military if…

There are two sides of me here. One wants to say, “If you don’t want to be a responsible civil servant.” You know, give back and all of those adult things. The other side of me says, “Unless you don’t want to fucking wreck shit and make an occupation out of destroying things for your life.” So I’m torn between those two answers.

Black Hawk Down. Because, even though military people will pick apart the accuracy of certain things, it shows the humanity of the people involved in war. The story of war is going on around these people while these people are living out their lives. It’s the story of Mogadishu; it’s the story of these guys, like Shughart and Gordon, the two Medal of Honor recipients, and their experience trying to survive this catastrophic failure of a plan.

MREs, just like our culture, are becoming pussified. You know they don’t even put Tabasco sauce or matches in them anymore? I’m not even joking. Anyways, the go-to for forever has been chicken noodle with mashed potatoes. You take the cracker, grind it up, and put it in there. Then you take the Tabasco and you mooch off someone else for the red pepper. Then you heat it all up and let it marinate for a little bit. Then you’re going to have a really pathetic version of a chicken jambalaya.

7. If you go back in time and talk to yourself at the Army recruiting station, what would you say?

I would explain that there’s a difference between the Army Special Forces and the Navy SEALs. That would’ve been good to know. Oh, and that the Navy SEALs are a bunch of pussies.

8. What has been your single scariest military experience so far?

Oh, single? I’ll give you two. I shot a dude and I thought I was going to jail. That was pretty scary. I also got blown up when an RPG initiated an ambush that ended up being a three-day gunfight. There were like 400 of them and like 35 of us outside of Firebase Anaconda. We had an AC-130 on station for like an hour and they called in on the radio and were like, “Hey guys, we want to let you know that we’ve now run out of ammo and we’ll be right back.” If you’ve ever run an AC-130 out of ammo, I tip my hat to you. If you haven’t, bow down to the power of this gunfight. It was legit.

So there were these two guys who would ride around on mopeds and when girls would walk to school in Afghanistan, these guys would throw jugs of acid on the girls’ faces because girls shouldn’t go to school. We found those dudes and buried them. I was pretty proud of that. I was also on the task force that killed al Zarqawi, who was on the list of baddest dudes on the planet, so that was pretty cool.

Cheat. You never fight fair. So, if I was going into a house and I started getting shot at from the house. In the movies, you throw a flash bang in the room and the bad guys are holding their ears and then you heroically shoot the dude. I walk up to the nearest bunker and then I call in an airstrike on the house. Or, let’s say I see a dude stick his head out of a room and he has an AK-47. I’m like, “Oh, damn, that guy has a gun.” So I throw a grenade down the hall. Then it blows up. And then I throw three more. Then I get out out of the house and I call in an airstrike.