The internet is truly magical place. Where else can you find a detailed walkthrough on how to make an air-powered,... 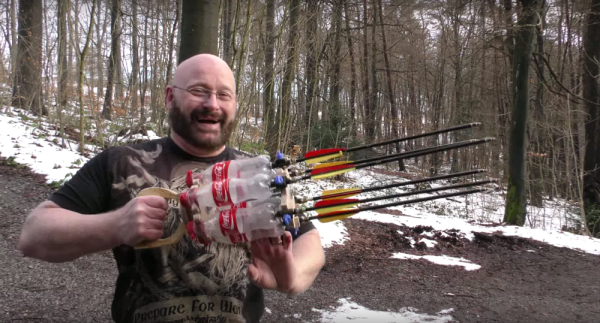 The internet is truly magical place. Where else can you find a detailed walkthrough on how to make an air-powered, arrow-launching gatling gun (sort of) with little more than a few valves, an empty six pack of Coca-Cola bottles, some wood, and a bike pump.

In a video, Jörg Sprave explains how to create this lean, green, recycled, death machine. All the parts can be bought off the shelf, and Sprave even points out that what he’s created is completely legal where he lives in Germany.

Sprave is a German inventor, hobbyist, and host of the YouTube video blog “The Slingshot Channel.” In weekly uploads, he showcases new inventions, but the themes are consistent — they’re always made from scratch, potentially dangerous, and very cool. In every episode, Sprave laughs, guffaws, and similarly charms his viewers. Point and case, during a Reddit Ask Me Anything, commenters couldn’t help but point out how jolly Sprave is.

“I wouldn't call myself a big slingshot buff, but I found you to be so damn likable that I couldn't stop watching your videos,” wrote one commenter, going by the name of Thunderballz, while That_Naked_Guy remarked: “You're like the jolliest man I know on YouTube, love your work.”

I mean it’s not surprising he’s so likable. The guy’s inventions are awesome, but he’s the real draw of this channel, and comes across like some kind of Viking Santa Claus bringing steampunk and macgyvered weapons to all the good boy and girl YouTubers of the world.

So if you want to see the world’s happiest mad scientist build a six-shot arrow launcher from recycled bottles and random junk, and who doesn’t, then check it out below.