US drawdown in Afghanistan is wrong call, says commander who claimed we were on the ‘road to winning’ in 2013

The general doth protest too much 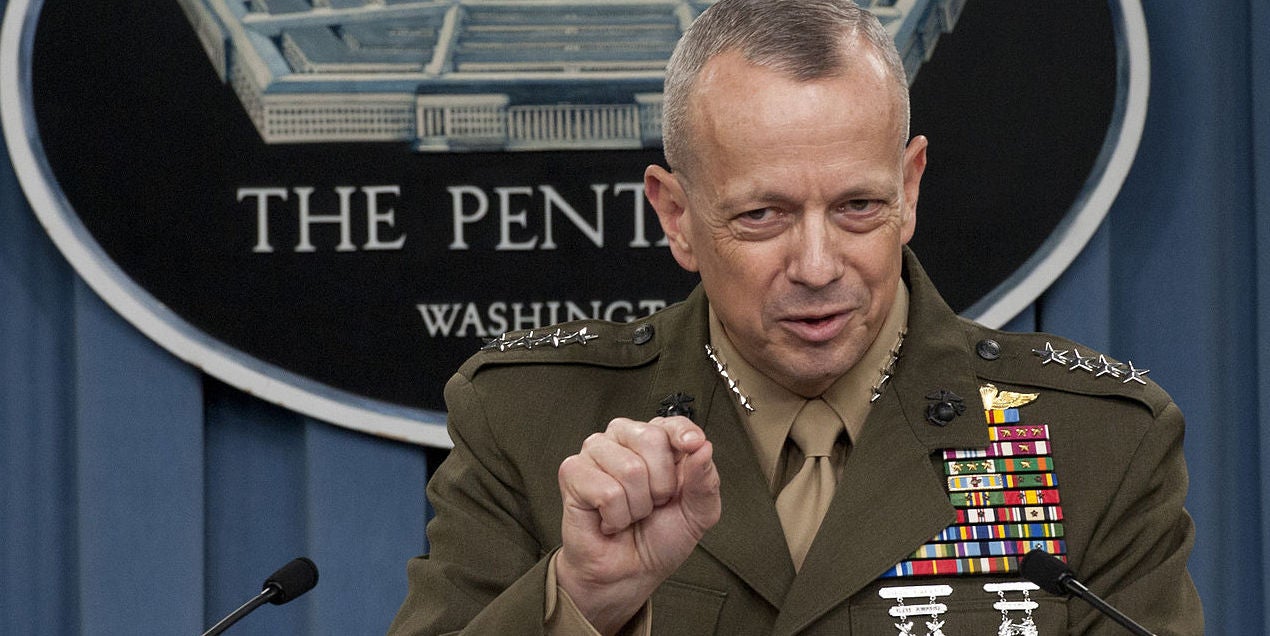 A former top commander who served as a cheerleader for the flagging Afghanistan war while he was in charge is now decrying President Donald Trump’s decision to cut the number of U.S. troops there as a purely political move.

Acting Defense Secretary Chris Miller announced on Tuesday that the U.S. military will draw down from about 4,500 to 2,500 troops in Afghanistan by Jan. 15.

Those troop reductions could lead to instability in Afghanistan when President-elect Joe Biden takes office in January, Allen said during an interview with Defense One executive editor Kevin Baron.

Miller also noted that the Taliban have failed to break with Al Qaeda, which is a key precondition for the withdrawal of all U.S. troops from Afghanistan by May 2021.

Moreover, he called the Taliban “completely unreliable,” and the leaders with whom the U.S. government has been negotiating “don’t speak for all of the Afghan Taliban.”

Trump’s decision to accelerate the drawdown of U.S. troops from Afghanistan appears to be the president’s attempt “to fulfill a campaign promise from years ago,” Allen said.

“There was no tactical, operational, or strategic merit to doing this with such a short period of time,” Allen said. “It’s just a political decision, I think, intended to put the Biden administration in an awkward position.”

However, Allen’s dire appraisal of the consequences of drawing down in Afghanistan come a bit late in the day. More than seven years ago, he claimed that the U.S.-led coalition fighting the Taliban was on the path to victory.

Several top military and defense officials made such optimistic assessments of the Afghanistan war for years, including former Defense Secretary Leon Panetta, Army Gen. Martin Dempsey, chairman of the Joint Chiefs of Staff, and Army Gen. John W. Nicholson Jr., who led U.S. troops in Afghanistan from March 2016 until September 2018.

But privately, U.S. military and other government officials acknowledged that the war was not going well at all. A 2015 government report that was later uncovered by the Washington Post revealed the candid and bleak assessments about U.S. efforts in Afghanistan.

“If the American people knew the magnitude of this dysfunction . . . 2,400 lives lost,” retired Army Lt. Gen. Douglas Lute, who served as Obama’s special advisor for Afghanistan and Pakistan, was quoted in the report as saying. “Who will say this was in vain?”

Former Defense Secretary Robert Gates also wrote in his most recent memoir, Exercise of Power, that any chances for victory in Afghanistan may have expired nearly two decades ago.

“I believe we — and the Afghans — would have been better served had our military departed in 2002 and had thereafter relied on non-military instruments of national power,” Gates wrote.

Related: US military officials are refusing to answer a basic question about America’s involvement in Afghanistan