The proverbial ‘fall of Saigon’ is fast approaching in Afghanistan

Upbeat talk of Afghan forces being “better than we thought they were” may soon be put to the test. 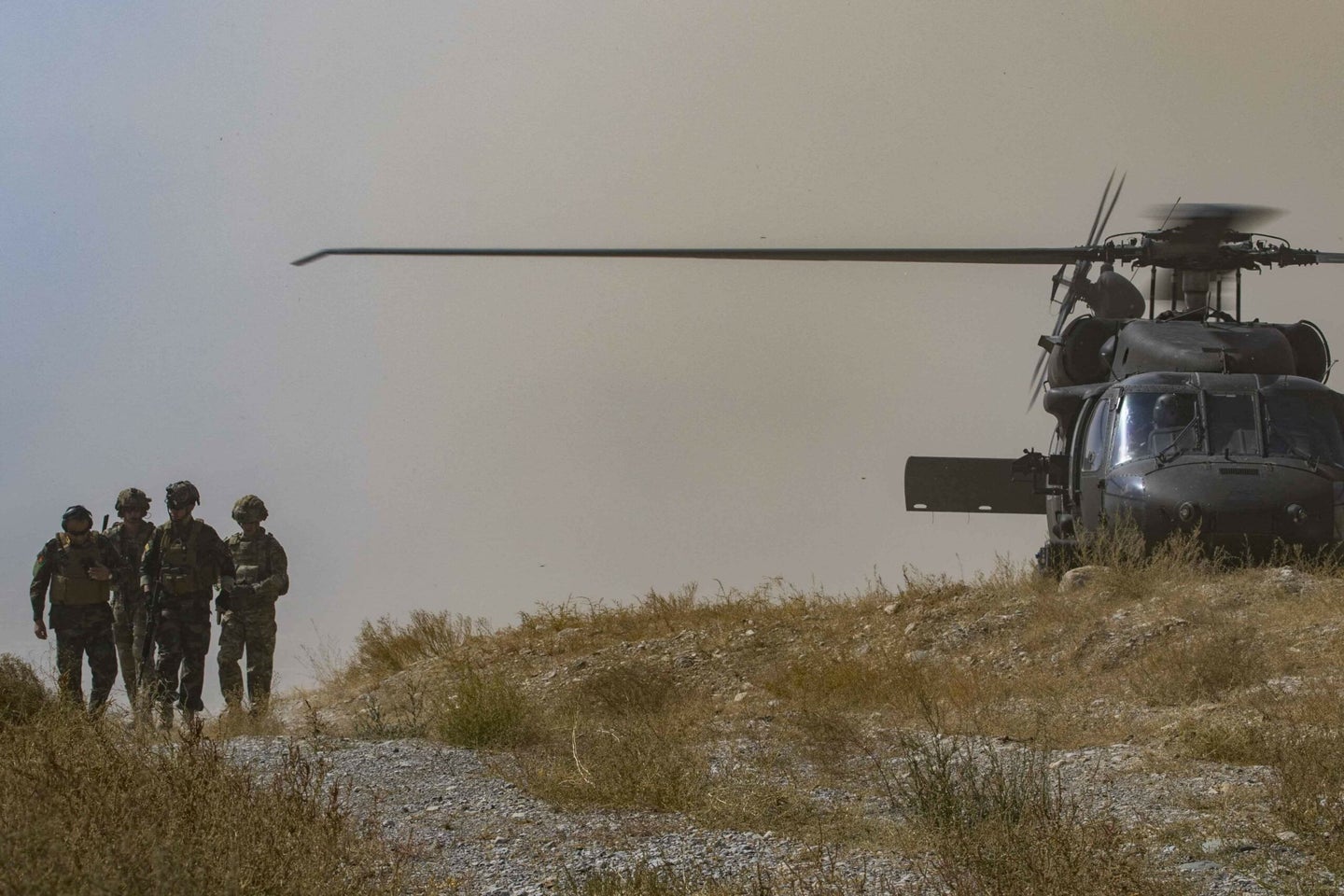 Afghan National Army Soldiers assigned to the 203rd Thunder Corps, Afghan National Army, accompanied by Soldiers assigned to the Headquarters and Headquarters Battalion, 1st Armored Division walk off a UH-60 Blackhawk Helicopter and move to an over watch position during a Afghan-led clearance operation in Southeastern Afghanistan, Sept 25, 2019. (Photo: US Air Force).
SHARE

It was a little past three in the morning on April 30, 1975, when the American ambassador in Saigon received an urgent message from the commander in chief. “The president expects Ambassador Martin to be on the last helicopter,” read the note, which authorized the use of 19 helicopters to evacuate Americans from the embassy grounds. “No more” helicopters, it said. The words were underlined twice.

A few hours later, as North Vietnamese troops pushed into the city and mortar fire edged closer to the embassy, ten Marines stepped onto the final helicopter to land on the embassy roof, according to French journalist Olivier Todd’s account. An iconic photograph would sum up the hasty evacuation for generations. “I was the last one,” said Master Sgt. Juan Valdez. Cobra gunships flew alongside the Marines as they headed towards the coast, with those on board cheering and taking pictures.

The ambassador consoled himself: “They did their best,” the 45-year diplomat thought of his colleagues at the embassy. The belief could just as easily have applied to every American service member deployed since the first American soldier died there in 1957. More than 58,000 Americans ultimately perished.

This was the official end of America’s role in the Vietnam War. And President Joe Biden may soon have to deliver a similar message to Kabul, ending America’s involvement in a war that has gone on for more than a decade longer.

There is no good answer to the question of what an American president should do about Afghanistan, which has vexed Republican and Democratic administrations alike. Congress has taken little interest in the topic, ‘winning’ has never been clearly defined, and irrational fears of “another September 11-like attack” emerging from the country continue to rule the day. Critics of Biden will almost certainly rely upon the last point.

But Biden will need to decide soon whether to abide by a peace deal, signed last year by the Taliban and the U.S., calling for the last 2,500 American troops to leave the country by May 1. And he has plenty to consider: Although the Taliban was quickly routed by American forces early on in the war, the group has resurged in the years since as the dominant force in Afghanistan. The U.S.-backed Afghan government is corrupt and largely inept. And according to an excellent account published Monday in The New York Times, the Taliban appear to be getting ready for a decisive battle for control of the country:

“The Taliban have been encroaching on key cities around Afghanistan for months, threatening to drive the country to its breaking point and push the Biden administration into a no-win situation just as the United States’ longest war is supposed to be coming to an end,” write Times’ reporters Thomas Gibbons-Neff and Taimoor Shah, revealing that outposts and military bases have been overtaken in several cities, including the northern cities of Kunduz and Pul-i-Khumri, which serves as an important lifeline to the country’s capital, and Panjwai, a district near the southern city of Kandahar that has been pummeled by Taliban fighters.

The Taliban has defied its usual pattern of pausing attacks in the winter, and terrorist activity has continued to increase, according to the U.S. State Department, which said recently in a remarkable statement given U.S. efforts over the past 19 years, that the country was becoming “an insecure environment in which terrorist and criminal groups are able to freely operate.”

An offensive in the fall consolidated Taliban control over territory, repelling attempts by American and Afghan forces to dislodge them. And while that may come as a surprise given emphatic assessments of confidence from top U.S. military leaders over the years, upbeat talk of Afghan forces being “better than we thought they were” may soon be put to the test.

“If the Biden administration honors the withdrawal date, officials and analysts fear the Taliban could overwhelm what’s left of the Afghan security forces and take control of major cities like Kandahar in a push for a complete military victory or a broad surrender by the Afghan government in the ongoing peace negotiations,” The Times reported.

Notably, Biden himself once vowed to pull all troops out of Afghanistan, “come hell or high water” by 2014. Seven years later, American troops are still there. But now, Biden has three options, according to Council on Foreign Relations fellow Max Boot: withdraw U.S. forces as scheduled by May 1, cite Taliban violations of the peace deal while maintaining an indefinite U.S. presence, or ask for an extension from the Taliban, which isn’t likely to grant one.

To wit: “Allah willing, we shall soon also be witnesses to the day when our homeland shall be completely free and rescued from foreign occupation,” the Taliban said in a statement released over the weekend, marking the embarrassing end of the Soviet incursion of the country in 1989.

All of Biden’s options are ‘bad’ for myriad reasons: Pulling all U.S. troops before the Taliban overruns the country won’t play well politically for the president, who saw his former boss hammered by critics claiming the Iraq withdrawal led to the rise of the Islamic State group. And as Boot acknowledges, the other two options would almost certainly enrage the Taliban, which would likely turn up the heat on American and international forces.

But as the U.S. government’s independent watchdog on Afghanistan recently put it, “the leverage of a substantial foreign troop presence in Afghanistan for stability and a negotiated peace is rapidly diminishing.” And with 75 days left, the clock is ticking.

Correction: This article has been updated to note the first American service member death in Vietnam was in 1957, not 1959.