The former founder and CEO of Blackwater says he needs just six months and roughly 3,600 men to make the... 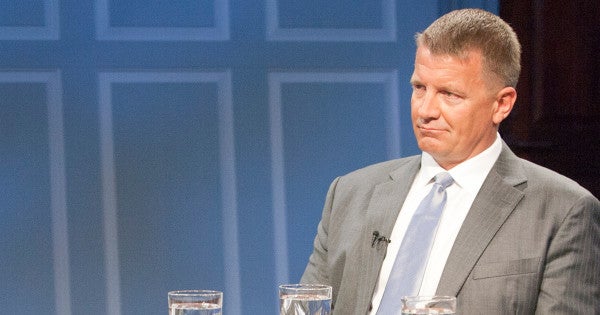 The former founder and CEO of Blackwater says he needs just six months and roughly 3,600 men to make the Afghan War look far different from the shitshow it is now.

In an interview with Afghanistan's TOLO News, Erik Prince once again pitched his idea to privatize the nearly-17-year-old conflict, offering up a force of “contracted veteran mentors” from the United States and NATO countries to serve alongside Afghan security forces.

“Well, I would say six months after the program is fully ramped up, you have a very different situation on the ground, I will commit to that,” Prince said, outlining a plan to provide 36 contractors for each unit of Afghan security forces, who would serve for two to four years at a time.

Yes, you read that right: Erik Prince says he can turn the war around in six months while suggesting his contractors could be there for at least four years.

“They provide leadership, intelligence, communications, medicals, and logistics expertise to their Afghan counterparts and go with them in the field all the time to make sure their Afghan counterparts are paid and fed, that they are well led, that they have a communications plan, all those essential elements of soldiering don’t break down,” he said.

Prince also said that if one of his contractors “does an evil act” such as intentionally injuring a civilian, they “could” be held accountable through the military's Uniform Code of Military Justice, which brought military contractors into the fold back in 2007.

“It's legally possible” to bring charges against a contractor in Afghanistan or elsewhere, according to Phil Carter, a lawyer and senior policy researcher at the RAND Corporation. “Contractors can be subject to the UCMJ in war or contingency operations.”

Carter mentioned the court-martial of Alaa Mohammad Ali, an Iraqi working for a contractor who was convicted of stabbing a fellow contractor. Although Ali was convicted and his appeal was subsequently denied, it still remains an open question of whether an American civilian could be convicted under military law and still pass constitutional muster.

“It's not really been tested otherwise, and there's sort of a big question as to how this would take place,” Carter said.

Prince has been shopping his privatization plan for several months to American officials and in the media. Defense Secretary Jim Mattis shot down the idea last month, telling reporters at the Pentagon that “privatizing is probably not a wise idea.”

A spokesman for the U.S. Resolute Support Mission declined to comment.