The Marine commander in charge of more than 1,500 Marines in Darwin, Australia who was relieved of his command after... 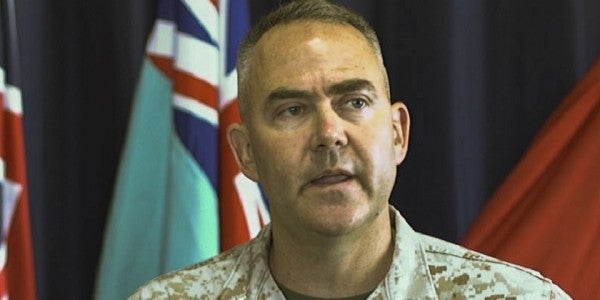 The Marine commander in charge of more than 1,500 Marines in Darwin, Australia who was relieved of his command after police caught him driving under the influence in late September recently plead guilty to the charges in a local court.

The officer in charge of Marine Rotational Force in Darwin, Col. James Schnelle, was reportedly on his way home from Shenanigans Restaurant and Bar in Darwin’s nightclub district — you know, that one with all the goofy stuff on the walls — on Sept. 30, when he was pulled over for a random breathalyzer test, which he promptly failed.

Within four hours of being stopped by police, Schnelle reported to both the commander of Marine Forces Pacific and the commanding general of III Marine Expeditionary Forces who called him back to relieve him of his post “due to a loss of trust and confidence,” the AP reported.

On Monday, Schnelle pleaded guilty at the Darwin Local Court for driving with a blood alcohol concentration of 0.102% — double the legal limit in Australia,according to AP.

Schnelle’s license was suspended for six months, and he was fined $353, though the court did not record a conviction due to “Schnelle's good character and lack of previous offenses,” according to Fox News (In Australia, magistrates have the latitude to not record a conviction, as a way to spare first-time offenders).

After being removed from his post, Schnelle said in a statement that “one extremely poor personal decision” should not undermine the work the Marines in Darwin have done. “A solid foundation is established; at the tactical, operational, and strategic levels, the future is ripe for continued growth.”

After Schnelle was removed, Lt. Col. Jeramy Brady was tapped to take over the Marine Rotational Force in Darwin.

Marines have been stationed in Darwin since 2012 and are required to follow a curfew and are restricted from taking leave unless they travel in a small group, so as to reduce the likelihood of “social disruption” in the city of roughly 140,000, notes Fox News.