Now that the destroyer USS John S. McCain’s former commanding officer has pleaded guilty to dereliction of duty, the Navy... 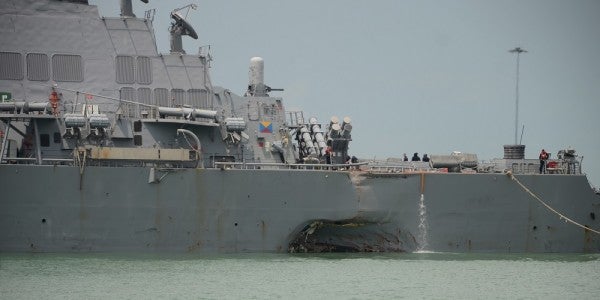 Now that the destroyer USS John S. McCain’s former commanding officer has pleaded guilty to dereliction of duty, the Navy will be spared having to publicly discuss the training and manning problems that contributed to the ship’s deadly collision last year. The Navy says it is currently addressing those underlying problems.

Ten sailors aboard the McCain were killed when the destroyer smashed into a tanker in the Singapore Strait on Aug. 21, 2017. Cmdr. Alfredo Sanchez, who commanded the ship at the time, will be allowed to retire and charges of negligent homicide and hazarding a vessel against him will be dismissed as part of the plea deal.

“The negligent homicide allegations were overcharged,” said Daniel Conway, a former Marine captain and attorney who represents military clients. “The causal connection between the commander and the deaths was attenuated. There were manning issues, training issues, and unfamiliarity with the waters. Ultimately the dereliction of duty charges seem more appropriate.”

It is rare for officers to appear before a special court-martial, which do not have the authority to dismiss officers or order prison time, legal experts told Task & Purpose on Tuesday.

“The special court-martial and dismissal of charges clearly signals the Navy's desire to avoid publicly litigating serious shortfalls in training in execution,” Conway said. “This was a negotiated result favorable to both sides: The Navy saved face and the commander saved his retirement.”

The fact that Sanchez appeared before a special court-martial could also indicate prosecutors were concerned that the former McCain skipper could be acquitted at trial or the punishment handed down would not be any more severe than the pretrial agreement, said Phillip Stackhouse, civilian attorney and retired Marine major.

“From the government’s perspective: Is the juice worth the squeeze?” Stackhouse said. “If I’m going to get the exact same sentence, the exact same punishment, but it’s going to cost me $500,000, if I can give a little bit more favorable agreement to the defendant and he will plead guilty, I accomplish the end state by achieving justice and save the government $500,000.”

Now the Navy must decide whether or not to pursue disciplinary action against Cmdr. Bryce Benson, who commanded the destroyer USS Fitzgerald during its June 17, 2017 collision with another ship that killed seven sailors. Even though Benson was asleep in his quarters and no one tried to contact him leading up to the incident, the Navy has charged him with negligent homicide.

One of the underlying reasons for the McCain and Fitzgerald collisions is that the Navy systematically is “robbing Peter to pay Paul” by taking money that funds operations and training to pay for new ships, said retired Cmdr. Kirk Lippold, who was commanding officer of the destroyer USS Cole during the Oct. 12, 2000 al Qaeda attack that killed 17 sailors.

“I think that both of these commanding officers were set up to fail,” Lippold told Task & Purpose on Monday. “I think that the Navy is continuing to force an unacceptable level of risk on the commanding officers that are out there today. It is unfortunate that we have a mindset in the Navy that accepts this risk and we have a leadership today that will not be honest with Congress and the American people on what the real cost is to adequately man, train, and equip the fleet.”

Lippold spent years battling with the Navy over responsibility for the Cole attack. He was placed on the fiscal 2003 promotion list for captain, but then-Navy Secretary Donald Winter decided to remove Lippold’s name from the list in August 2006 and the former commanding officer retired the following year.

Lippold’s advice to Cmdr. Benson — if Benson is referred to a court-martial, call Chief of Naval Operations Adm. John Richardson as the defense’s first witness.

“He’s the one who bears direct responsibility for the status of the ships on the waterfront,” Lippold said. “Overall training readiness in the Navy has not improved to any appreciable degree following these two incidents.”

The Navy has conducted two major reviews into the factors that contributed to both the McCain and Fitzgerald collisions and is already taking action to make sure that U.S. ships based in Japan are properly manned, said Navy spokesman Lt Cmdr. Daniel Day.

“Six of 11 Japan-based cruisers and destroyers meet their manning targets with 10/11 expected by June 2018,” Day said in an email. “Nine of nine amphibious ships meet their fit/fill targets. New incentive policies have been enacted to encourage sailors to select and extend in Japan-based billets. Manning statuses are reviewed monthly by fleet commanders to identify shortfalls. To improve readiness and reduce turnover of our Forward Deployed Naval Force (FDNF) sea duty units, first-term sailors assigned to sea duty billets in Japan, Guam, and Spain are being assigned to longer tour lengths.”

“The scope of the tragedies and the obligation we all have to our lost shipmates demands the Navy's full attention in order for the fleet to maintain its warfighting edge,” Day said.