The Navy’s top admiral in charge of surface forces is retiring early, and two major 7th Fleet commanders have been... 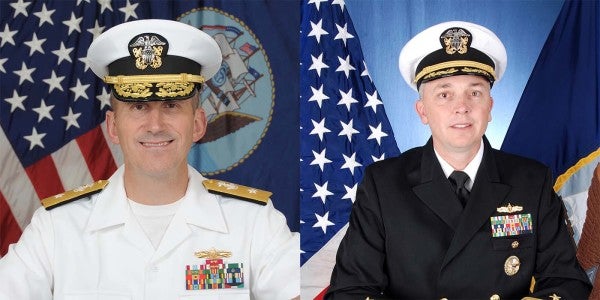 The Navy’s top admiral in charge of surface forces is retiring early, and two major 7th Fleet commanders have been fired, part of the service’s latest efforts to clean house after a string of serious shipboard mishaps that have left 17 sailors dead this year, according to news reports.

Rear Adm. Charles Williams — commander of Combined Task Force 70 and Carrier Strike Group 5, which oversee forward-deployed naval forces in the Pacific — and his subordinate Capt. Jeffery Bennett — commodore of Destroyer Squadron 15, which includes the ill-fated USS John S. McCain and USS Fitzgerald — were relieved “due to a loss of confidence in their ability to command” Sep. 18, Navy officials confirmed to USNI News this morning.

The firings were approved by Vice Adm. Philip Sawyer, the 7th Fleet commander who was installed last month after his predecessor was held accountable for the fatal McCain and Fitzgerald collisions, as well as two earlier 2017 accidents, a grounding and a collision involving U.S. guided missile cruisers.

The personnel shuffle came in addition to a request by Vice Adm. Thomas Rowden, commander of U.S. Naval Surface Forces, to retire two months ahead of schedule to “allow for new leadership” of the surface fleet, officials told USNI News.

Williams and Bennett’s firings mark the fifth and sixth dismissals in 7th Fleet in connection with the recent spate of shipboard incidents. Vice Adm. Joseph Aucoin, the highly respected 7th Fleet commander, yielded his command to Sawyer in August, just days after the captain, executive officer, and command master chief of the Fitzgerald were relieved of their positions.

More changes are expected soon, as major investigations into each mishap and the Navy’s general readiness posture wind to completion. On Sept. 19, Navy Secretary Richard Spencer and Chief of Naval Operations Adm. John Richardson are scheduled to testify about “Recent United States Navy Incidents At Sea” before the Senate Armed Services Committee.

They are set to appear with John Pendleton, leader of a General Accounting Office study released Sep. 7 that blasts the Navy for “persistent training, maintenance, and other issues” that could have contributed to low-readiness and higher risk of collisions and groundings.

“We believe that, until the Navy makes the needed changes, its ships may not have the right number and skill mix of sailors to maintain readiness and prevent overworking its sailors,” the GAO report concluded.