During its return from an annual supply run to the McMurdo research station in Antarctica, the U.S. Coast Guard's only heavy icebreaker, the Polar Star, had a fire break out inside its incinerator room as it sailed about 650 miles north of McMurdo Sound 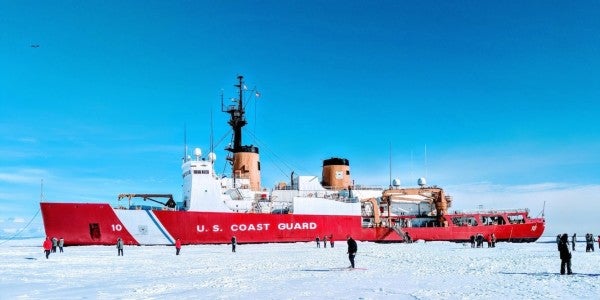 During its return from an annual supply run to the McMurdo research station in Antarctica, the U.S. Coast Guard's only heavy icebreaker, the Polar Star, had a fire break out inside its incinerator room as it sailed about 650 miles north of McMurdo Sound.

The incident occurred on February 10, after the icebreaker had left Antarctica, where it had cut a channel though nearly 17 miles of ice that was 6 to 10 feet thick to allow a container ship to offload 10 million pounds of supplies that will sustain US research stations and field camps in Antarctica.

According to a Coast Guard release, four fire extinguishers failed during the initial response, and it ultimately took two hours for the ship's fire crews to put out the blaze. While damage from the flames was contained inside the incinerator housing, water used to cool nearby exhaust pipes damaged electrical systems and insulation in the room.

No injuries were reported, and the cause of the fire is still being investigated.

“It's always a serious matter whenever a shipboard fire breaks out at sea, and it's even more concerning when that ship is in one of the most remote places on Earth,” Vice Adm. Linda Fagan, commander of the US Coast Guard's Pacific Area, said in a release. “The crew of the Polar Star did an outstanding job — their expert response and determination ensured the safety of everyone aboard.”

The Polar Star was commissioned in 1976 and overhauled in 2012, but it is operating well beyond its 30-year service life. The ship suffers from a lack of parts, as many components are no longer in production; Coast Guard crews have stripped parts from its sister ship and ordered them from eBay to keep the Polar Star running.

The Polar Star is the Coast Guard's only heavy icebreaker, capable of smashing through the thick ice that builds up in the Arctic and around Antarctica. As such, it makes the run to McMurdo every year in the winter months and then goes into dry dock for maintenance and repairs in preparation for the next trip.

Having just one working heavy icebreaker has hindered the Coast Guard's ability to meet request from other government agencies. The service could only do 78% of heavy icebreaking missions between 2010 and 2016, according to a 2017 Government Accountability Office Report.

Retired Adm. Paul Zukunft, who was Coast Guard commandant between mid-2014 and mid-2018, said in December that he turned down a request to carry out a freedom-of-navigation exercise in the Arctic out of concern the Polar Star would break down and need Russia to rescue it.

The Polar Star had $7.6 million in repairs done during its most recent dry-dock stint, overhauling auxiliary systems, upgrading generators, and replacing propellers. Repairs related to the fire are already being planned. “The incinerator will need to be full functional before next year's mission,” the Coast Guard said.

The Polar Star left its home port in Seattle on November 27 to make the 11,200-mile trip to Antarctica for the sixth time in as many years. It suffered a number of mechanical problems on the way there, including smoke damage to an electrical switchboard, ship-wide power outages, and a leak in the propeller shaft.

Repairing the propeller-shaft leak required the ship to halt icebreaking operations and deploy divers to fix the shaft seal. The Polar Star also had a number of mechanical issues during its 2018 run to McMurdo.

The Polar Star sailed into Wellington, New Zealand, on February 18 for a port call, the first time those aboard had set foot on land in 42 days, according to New Zealand news outlet Stuff. The ship is currently on its way back to Seattle, the Coast Guard said in its release.

The Coast Guard has been pushing to build a new heavy icebreaker for some time, setting up a joint program office with the Navy to oversee the effort. Funding for the new ship had been held up in Congress, but lawmakers recently approved $655 million to start building a new one and another $20 million for materials for a second.

A seal on the ice in front of the Coast Guard icebreaker Polar Star while the ship was hove-to in the Ross Sea near Antarctica, January 30, 2015
(U.S. Coast Guard/Carlos Rodriguez)

In summer 2018, the Senate approved $755 million for the new icebreaker, but the House of Representatives instead authorized $5 billion to build the US-Mexico border wall sought by President Donald Trump, cutting a number of programs, including that of the icebreaker in the process.

But Congressional staffers told USNI News this month that the Homeland Security Department's fiscal year 2019 appropriation would include $675 million for new icebreakers.