One killed in fire aboard Russia’s only aircraft carrier

Russia's only aircraft carrier, the Admiral Kuznetsov, caught fire on Thursday during maintenance work in Russia's Arctic port in Murmansk 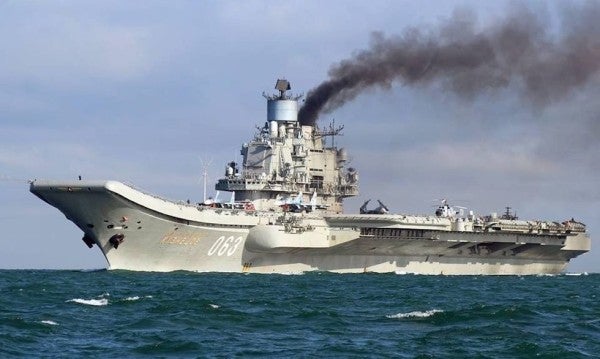 At least one military serviceman was killed and 12 people were injured by a fire at Russia's only aircraft carrier, the Admiral Kuznetsov, Russian news agencies reported on Thursday.

The Admiral Kuznetsov caught fire on Thursday during maintenance work in Russia's Arctic port in Murmansk. Hours later the fire has been brought under control.

The body of a military serviceman was found during the fire-fighting operation, RIA state news agency reported, citing the Northern Fleet.

The number of people injured in the fire rose to 12, with the majority suffering from intoxication with products of combustion, TASS state news agency reported, citing a local emergency medicine unit.

The Admiral Kuznetsov gained notoriety in Britain in 2017 when then-Defence Secretary Michael Fallon dubbed it the “ship of shame” as it passed through waters close to the English coast en route back from the Mediterranean belching black smoke.

After catching fire, the ship was successfully evacuated, the United Shipbuilding Corporation said earlier on Thursday, with emergency services working to tackle the blaze that began in the ship's hold.

TASS said the blaze had started on the upper deck and that thick, black smoke was billowing from the vessel. Firefighters were finding it difficult to reach the blaze because of the heavy smoke caused by burning cables, TASS reported.

The Admiral Kuznetsov has seen action in Russia's military campaign in Syria in support of President Bashar al-Assad, with its planes carrying out air strikes on rebel forces.

Misfortune has befallen the ship before. The vessel sustained damage during repair work last year when the floating dock holding it sank and a crane crashed onto its deck, leaving a gash up to five meters (16.5 feet) wide.