A U.S. Army Stryker armored vehicle burst into flames on the side of a Polish roadway on Saturday, the Army confirmed on Monday 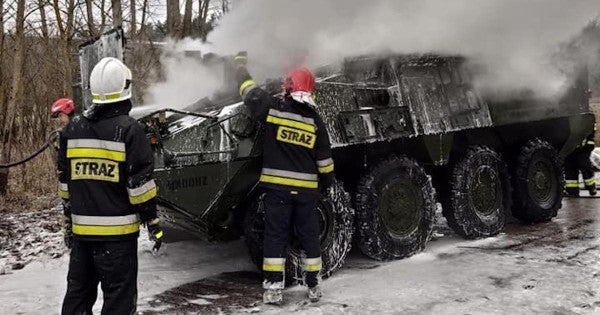 Photos posted to Facebook by a local volunteer fire brigade appeared to show smoke pouring from a Stryker vehicle just outside of the village of Gorzekaly in northern Poland, the UK-based Defence Blog first reported.

Col. Joe Scrocca, a spokesman for U.S. Army Europe, confirmed that a Stryker assigned to the 2nd Cavalry Regiment had experienced an engine fire at a railhead there.

According to Defence Blog, two soldiers “were in the vehicle at the time the fire began and reported hearing a loud noise before smoke began seeping into the back of the cab.”

Scrocca confirmed that there were no injuries or damage to other equipment.

“The vehicle was recovered and the initial assessment was that the fire was contained to the engine compartment, and other than scorching marks the hull appears to be okay,” Scrocca said.

The 2CR, which is headquartered at the Rose Barracks in Vilseck, Germany, kicked off a rotation with NATO's Enhanced Forward Presence (EFP) mission in the town Polish town of Bemowo Piskie earlier this month, Stars and Stripes reports.

The EFP mission, initiated in response to Russia's annexation of Crimea in 2014, consists of four multinational battle groups based in Poland, Estonia, Latvia, and Lithuania and tasked with “demonstrating the strength of the transatlantic bond, and making clear that an attack on one Ally would be considered an attack on the whole Alliance,” according to NATO.

The burning Stryker isn't the first incident to strike the 2CR during a NATO-sponsored show of strength in eastern Europe. In June 2018, at least 15 U.S. Army soldiers were injured when four Stryker vehicles collided during a tactical road march near the Lithuanian city of Prienai, just 50 miles from the Polish border.