In the latest sign that the Navy seems to have finally given up on the issue-plagued 'little crappy ships,' the service reportedly plans on decommissioning its first four littoral combat ship in 2021 to save cash. 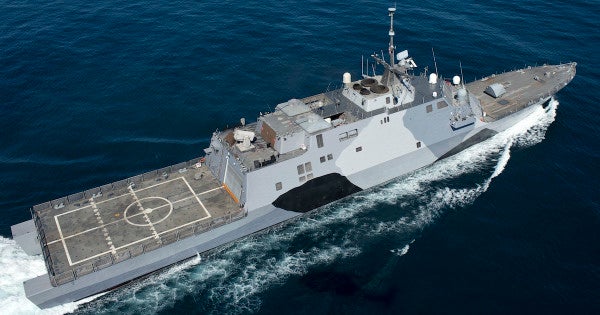 In the latest sign that the Navy seems to have finally given up on its issue-plagued 'little crappy ships,' the service reportedly plans on decommissioning the first four littoral combat ships in 2021 to save cash.

According to a December memo from the White House's Office of Management and Budget, the plan would decommission the littoral combat ships Freedom, Independence, Fort Worth and Coronado, all of which have “between 12 and 17 years of planned hull life remaining,” Defense News reports.

The proposal is part of the Navy's plan to slash 24 ships from its fleet — a dozen vessels currently in service and a dozen planned for construction — in order to produce billions of dollars in savings.

Those savings would purportedly allow the service to focus on ongoing aircraft carrier maintenance issues and the production of expensive new vessels like the Virginia-class nuclear attack submarines.

Overall, the proposal would immediately shrink the size of the Navy's overall fleet to 287 ships from 293 shi