They lack a means of propulsion, armaments, or soul. 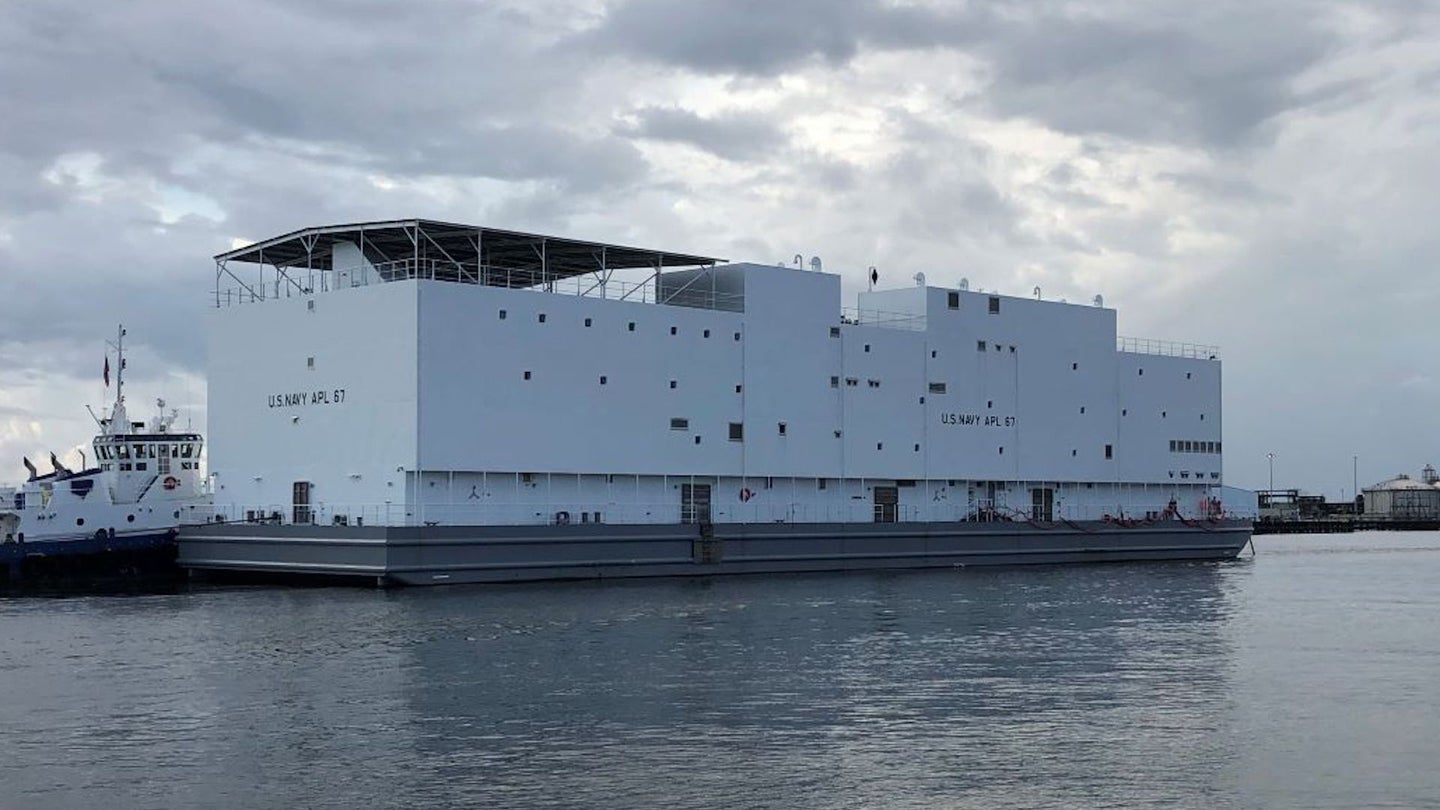 Life on a Navy ship is not known for being a comfortable and enjoyable experience. It is crowded, loud, smelly, and generally miserable. But if the U.S. military teaches you anything, it is that things always have the potential to get worse.

Enter the Auxiliary Personnel Lighter (APL), the Navy’s solution for temporarily housing sailors when their warships are uninhabitable because of repairs, giant fires, or anything else that would keep them ashore for longer than usual.

Also known as a Berthing and Messing Barge, the floating barracks is essentially an 82-meter long gray-white building the Navy can place on the water that has no means of propulsion, armaments, or soul.

In theory, they should be better than ships. These barracks barges can house up to 611 sailors broken down into 537 enlisted and 74 officers. They have everything sailors need to continue their day-to-day life as if they were still on the ship such as offices, medical facilities, a barbershop, a gym, and dining areas that can seat up to 224 enlisted and 28 officers at a time, “allowing food service for 1,130 personnel to have three meals a day,” according to Navy.

But they aren’t better, according to sailors. Not by a long shot.

To start, most of the Navy’s berthing barges are old as hell. At the moment, 13 of the service’s current fleet of 18 were built between 1944 and 1946, back when lead paint and asbestos were industry standards and ‘quality of life’ wasn’t even a phrase. Their newest one was over 20 years old before the service took delivery of APL-67 last week.

And according to folks on social media, they’re also noisy, dirty, and nothing works — at least, on the older models. One person on Twitter compared them to a decades-old neglected motel:

Sailors on Reddit were overwhelmingly anti-barge. One called living the experience “literally the shittiest thing the [N]avy ever did to me.”

“It’s literally the worst experience of my life,” wrote another. “It was so bad that on duty days I would sleep on the ship (which had no AC and I live in Florida). Ours was infested with roaches and bed bugs. I and many others I know wouldn’t even shower on it.”

And another said, “Prepare to live with cockroaches and mice. Here’s some advice, get an apartment.”

The most scathing criticism we found stated simply: “When we were assigned a barge when our ship was decommissioning it was the most vile, disgusting thing I had ever been aboard.”

Indeed, an informal poll Task & Purpose posted on Instagram was overwhelmingly against berthing barges with 64 percent of respondents preferring ships. That’s really saying something considering how unpleasant life on a standard Navy ship can be.

Fortunately for the sailors who have to live on them, not everything is awful. According to the service, the berthing areas (where you sleep) only hold 18-24 sailors and have the heads (bathrooms) attached to them. This seems better than having possibly hundreds of sailors crammed in one area and the heads scattered all over like on most Navy ships.

Indeed, some sailors enjoyed the experience. In a 2018 interview with the Kitsap Sun, Mass Communication Specialist Third Class Christopher Jahnke stated that “As a single sailor, there’s pretty much everything I could want or need here.” Not exactly a glowing recommendation, but that’s about as positive you can be in the Navy, I guess.

While everything in the U.S. military has pros and cons, leave it up to the Navy to find a way to make living on a cramped, unstable, and smelly ship preferable to an alternative. Hopefully, this new barge is a drastic improvement over the old, but, as with most other major Navy projects, only time will tell.