Lawmakers Battle Over Tobacco Use In The Military

When Defense Secretary Chuck Hagel was asked during a March press conference whether he favored banning tobacco sales on military... 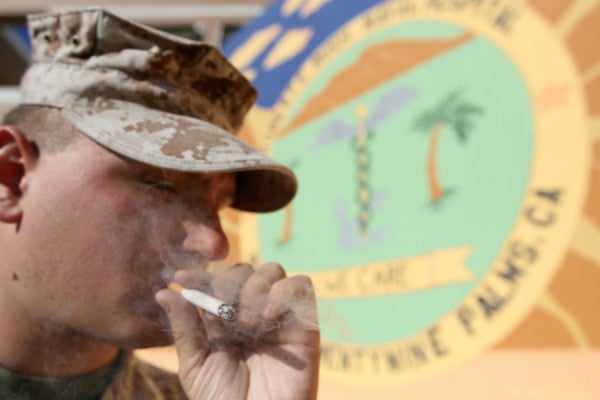 When Defense Secretary Chuck Hagel was asked during a March press conference whether he favored banning tobacco sales on military bases, he seemed open to the idea. “I don’t know if there’s anybody in America who still thinks that tobacco is good for you.”

The question was a result of reports that Secretary of the Navy Ray Mabus was seriously considering eliminating tobacco from all sales venues, including Navy ships. “Tobacco use is the most avoidable public health hazard in the Navy and Marine Corps,” Mabus wrote in a 2012 memo, when the Navy eliminated tobacco price discounts.

Congress played its part in the proposal. A letter from five Democratic senators in March urged the Navy secretary to implement the ban. “We understand that you are considering prohibiting the sale of all tobacco products aboard naval bases and ships. We commend your efforts and hope that you will move forward with this initiative which will renew emphasis on the health of our dedicated sailors and Marines as well as provide for increased combat readiness,” the letter said.

“One in three members of the military today says they started after they enlisted. Why? Well, because we make it easy for them,” Senator Dick Durbin, a Democrat from Illinois, said at a June hearing.

While a comprehensive Department of Defense review of its tobacco policies will be presented to Hagel this fall, the effort has faced some serious pushback. Republican Rep. Duncan Hunter of California introduced an amendment to the defense authorization bill in May that called for preventing the DoD implementing from “any new policy that would limit, restrict, or ban the sale of any legal consumer product” already sold as of 2014.

“It’s not curbed for anybody else. Why pick out the folks who choose of their own accord to fight for their country and serve their country, and punish them?” Hunter told Politico. “Leave us the hell alone — we’re out here fighting for your freedom, and you’re taking away ours.”

Tobacco use has a long history within the military. Before World War I, pipes and cigars were the most popular form of tobacco. But cigarette smoking, which was faster and more convenient in the mire of the trenches, exploded in popularity during the war.

The U.S. military’s C-ration adopted in 1944 included a pack of nine “good commercial-quality” cigarettes with every ration, along with a book of matches.

Fewer than one in five of the civilian population use tobacco, but according to a 2009 report from the Institute of Medicine, more than 30% of active-duty personnel smoke, and a slightly lower 22% of veterans. During deployments, this percentage spikes by as much as 50%.

The popularity of tobacco carries with it all the costs that it inflicts on users’ health, productivity, and healthcare. The DoD spends more than $1.6 million a year on tobacco-related health problems and lost work days, while the Department of Veterans Affairs spent $5 billion in 2008 on chronic obstructive pulmonary disorder alone, which strongly correlates with tobacco use.

But along with Hunter’s amendment, there has been skepticism at the highest levels about banning a product on military bases that is available to the general civilian population. “We lead an uncommon life by choice,” Chairman of the Joint Chiefs of Staff Gen. Martin Dempsey said at the June hearing.“We’ve asked a lot of our men and women in uniform, and we lead an uncommon life by choice. But all the things you’re talking about are legal, and they are accessible, and anything that makes anything less convenient and more expensive for our men and women in uniform, given everything we’re asking them to do, I’ve got concerns about.”

The House Armed Services Committee approved Hunter’s amendment by an overwhelming vote of 53–9 in May.

“The military is viewed as an experimental organization by this administration and if they are truly committed to banning tobacco sales — then they’ll face quite a fight,” Hunter’s spokesman Joe Kasper told Task & Purpose. “The amendment does stand a chance of making it in the final version of the defense bill, given the strong bipartisan support the amendment received. A very good chance, in fact.”