On June 6, the last known living 9/11 search-and-rescue dog, passed away at the age of 16. The golden retriever... 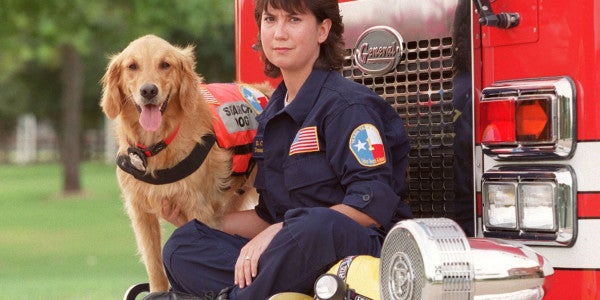 The golden retriever named Bretagne was euthanized Monday at a Texas veterinary hospital, according to the Daily News.

When the Cy-Fair Volunteer Fire Department learned that Bretagne would be put to sleep, they met Bretagne’s owner, Denise Corliss, at the hospital to give the four-legged hero one last salute.

“This was a very small way for us to pay tribute to a dog who truly has been a hero,” Cy-Fair Volunteer Fire Department Captain David Padovan told TODAY. “Just because she's a K9 doesn't make her any less part of our department than any other member.”

According to the Daily News, after Bretagne’s passing, her body was covered in an American flag and taken to Texas A&M; University, where veterinarians will study the effects of Ground Zero on the canine’s body.

Bretagne was 2 years old when she and her handler, Corliss, were sent as part of the Texas Task Force to the World Trade Center site following the Sept. 11 attacks. The search-and-rescue dog worked 12-hour days searching the rubble for almost two weeks at Ground Zero. Like so many others, Bretagne sadly never found any survivors, but she served as a great source of comfort for rescuers and firefighters working on site.

Watch below as Bretagne receives an emotional final salute from firefighters in her community.