I remember the first time I ever became aware of the Westboro Baptist Church’s existence. It was a rumor. The... 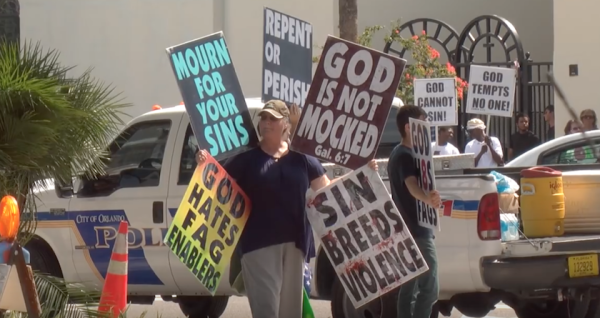 I remember the first time I ever became aware of the Westboro Baptist Church’s existence. It was a rumor. The group, we were told, was planning to protest the funeral of one of the soldiers in my platoon who’d been killed in combat. Furious doesn’t even begin to describe what we felt, but what could we do? We had nine months left in Afghanistan. Then we heard another rumor: a group of bikers was going to show up to the funeral to shield the family and friends of our fallen comrade from the demonstrators. They did, and ultimately drove the Westboro protesters away. I never got a chance to thank them.

The members of the Westboro Baptist Church, which was established in 1931 in Topeka, Kansas, espouse a theology of hatred and intolerance that is no less anti-American than what is preached by terrorists organizations like the so-called Islamic State. “Thank God for dead soldiers” and “thank God for 9/11” are two of their favorite rallying cries. But the group’s hatred isn’t just focused on the U.S. military. Since 1999, Westboro has also been protesting the funerals of gay men and women, including ones killed in acts of hate. And on June 18, they reared their ugly heads once again, protesting the funeral of Christopher Andrew Leinonen, who was murdered alongside 48 others during the recent massacre at a gay nightclub in Orlando, Florida.

Related: Army reserve captain among those killed at mass shooting in Orlando nightclub >>

Fortunately, as what happened during the funeral of the fallen soldier from my platoon, a group of strangers arrived on the scene in droves to foil Westboro’s attempts to disrupt the service and counter the church’s message of hatred with gestures of unity and peace. The counter-protestors, numbering around 200 people and including bikers, priests, and members of the LGBT community, created a human barrier between the Westboro demonstrators and the funeral service, singing “Amazing Grace” and carrying signs that read “God is Love” and “Orlando Strong.” According to the Washington Post, the group had been formed “organically through Facebook.”

Eventually, another group, which was organized by the Orlando Shakespeare theater, entered the fray in silence. All of them were adorned with “angel wings” constructed from PVC pipes and white sheets — symbols of love and peace that doubled as an additional barrier between the Westboro demonstrators and those attending Leinonen’s funeral, which was held at the St. James Catholic Cathedral in Orlando. More than a dozen police officers were also present to maintain security. According to the Washington Post, soon after the “angels” arrived, the Westboro demonstrators “retreated toward their vehicles, and the crowd roared,” while the counter-protesters chanted, “Orlando strong! Orlando strong!”