6 Ways To Inspire Pride And Honor In Your Troops

Editor’s Note: An extended version of this article originally appeared on The Military Leader, a blog by Drew Steadman that... 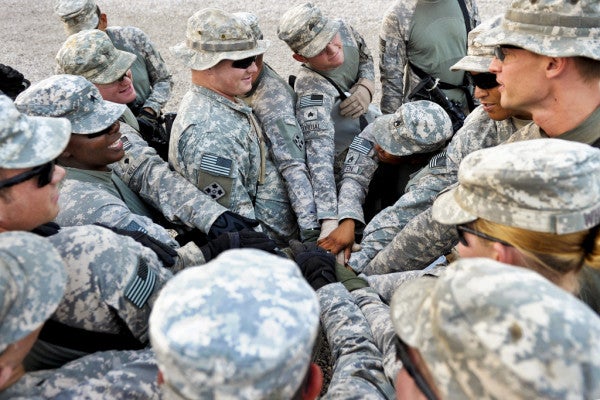 Editor’s Note: An extended version of this article originally appeared on The Military Leader, a blog by Drew Steadman that provides leader development resources and insight for leaders of all professions.

Evidence of courage, sacrifice, and heroism is all around us, but easy to overlook or forget about. The monuments on parade fields and outside unit headquarters, the unit awards we wear over our right pockets, the inspirational war movies like “Glory,” “We Were Soldiers,” and “Black Hawk Down.” We bump into them from time to time and appreciate the sense of pride and reverence they stir in us. They also validate and uplift the role we serve today in defending our country.

Yet how often do we use these examples as centerpieces for professional development? How often do we rouse the troops with the heroics of Yorktown, Bastogne, or Fallujah? And what about the unit history? Do we recount the important unit milestones so our soldiers can hear of the sacrifices made for the patch they wear today?

Leaders are responsible for igniting in their formations the fire of passion, pride, commitment, service, and honor. Managing the mundane is not our only role. Most of us joined the service with these values in mind, but over time have forgotten to draw from them. We don’t talk about our values often enough, but we should, for they are “the why” that justifies the sacrifice that “the what” and “the how” demand from us daily. Leaders must make that relationship evident.

How can we do this? After brainstorming a bit, I realized the opportunities are abundant.

1. Relay stories of valor from the unit and military history.

Pick a few memorable dates from the unit lineage and highlight them in speeches, promotions, farewells, formations, and even during meetings and family events. Less formally, find a quick story of inspiration you can use in smaller settings like the rifle range, motor pool, or chow hall. When you think about it, it’s incredibly easy to inject pride into the follower groups you encounter.

2. Consider playing clips of the movies that ignite our military spirit or reveal a leadership lesson.

It doesn’t take much. Do it to open a recurring big meeting and discuss the movie for five minutes. Films resonate with us and stir emotions like no speaker at a podium can. Here are a few: “Patton,” “Twelve O’Clock High,” “Gettysburg,” “Unbroken,” “Band of Brothers,” “Saving Private Ryan,” “A Few Good Men,” “The Patriot,” “Master and Commander,” “A Bridge Too Far,” “Heartbreak Ridge,” “Crimson Tide,” and documentaries like “Restrepo” and “Korengal.”

3. Incorporate a particular battle into a tactical training event or physical fitness event.

Shows like the Twilight Tattoo and Marine Corps Evening Parade, and unit performance teams like the color guard, the 1st Cavalry Division Horse Detachment, the 82nd Airborne Division Band, and many others, can add an element of service pride to your event.

4. Do some research on what events you can involve the troops in.

Staff rides are almost always a hit, especially if you can get an expert historian to contribute and attend. Research some stories of sacrifice at the Soldier-level, not just the big unit maneuver, to make it more vivid. (Dan Carlin does a good job of this.)

5. Recite a unit creed or motto to build unit cohesion that might not otherwise be there.

At every opportunity, remind the formation that they are part of something larger, that their history is built on sacrifice, and give them examples to live up to.

Heroism pours out of our storied history. You don’t have to look far to find it and bring it to life for those we lead. Remind them that act two of yesterday’s courage is happening today, and to continue the living example of honor, service, sacrifice, and loyalty.

6. Highlight the incredible acts of courage and sacrifice our Medal of Honor recipients have displayed.

The book, “Medal of Honor,” is a great place to start. Read a medal citation at close-out formations or during ceremonies to inspire feelings of pride and admiration.