Tom Hanks: ‘Military Caregivers Are Hidden Heroes And They Need Your Support’ 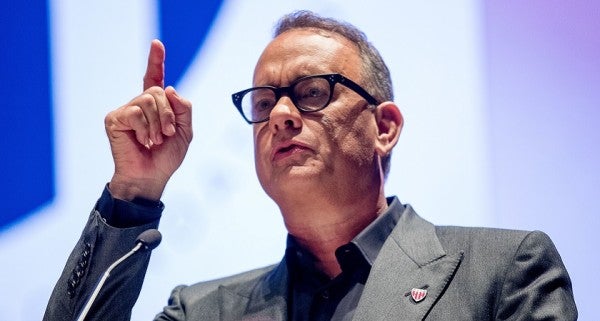 On. Sept. 27, Tom Hanks and former Sen. Elizabeth Dole officially announced the launch of Hidden Heroes, a national campaign to raise awareness and garner support for the nation’s 5.5 million military and veteran caregivers.

At the event, Hanks addressed the crowded auditorium at the U.S. Capitol in Washington, D.C., and posed a simple question:

“What part are you going to play in this movement?” asked Hanks, the national chair of Hidden Heroes. “I trust that the stories of honor and sacrifice we will now share and those you will learn about in the weeks and months ahead will bring you to your answer.”

Hanks, along with guest speakers, journalist and former NBC Nightly News anchor Tom Brokaw, Secretary of Veteran Affairs Robert McDonald, Democratic Minority Leader Nancy Pelosi, and others weighed in on the critical challenges facing military caregivers, and the importance of supporting them.

Hidden Heroes was launched by the Elizabeth Dole Foundation, an organization founded by Dole in 2012. It seeks to strengthen and empower military caregivers and their families through research, raising awareness, and policy change.

“Bringing our country's hidden heroes, and that’s what they are, heroes who are hidden out of sight, bringing them out of the shadows to honor their service is a companion piece, I think, to welcoming home those who have served,” said Hanks.

According to the Elizabeth Dole Foundation’s findings, the challenges facing military caregivers include: depression, isolation, unemployment, and debt due to a severe lack of awareness and support. These strains have been exacerbated by the constant state of war since Sept. 11, 2001, with many younger caregivers facing daily challenges that last years, if not a lifetime.