9 military movies from the ’90s that are still worth watching

Here are 9 military movies from the ‘90s that capture the spirit of that decade. 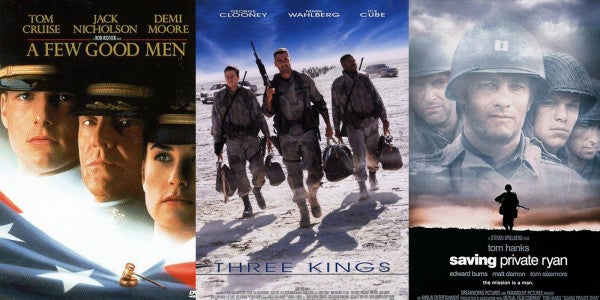 The 1990s brought us a lot of things: Pokémon; Furbies; Pauly Shore; grunge music; The Backstreet Boys; and Tamagotchis. But it also gave us something a bit more culturally durable: a constellation of war movies with their own unique style.

Straddling the fall of the Berlin Wall and before the events of Sept. 11, 2001, that period of cinematic history was a time of unquestioned American supremacy, and that’s largely reflected in military movies that dropped during that decade. While there were certainly some “rah, rah, ‘Merica” moto-boner-inducing flicks, there were others that took a different, more aspirational approach: They didn’t make the claim that America could do no wrong, but that America would do no wrong.

With that in mind, Task & Purpose cobbled together a list of nine military movies from the ‘90s that acknowledge our capacity for failure — strategic, moral, and otherwise — but push right on through to close on an optimistic high note.

What’s it about: Based on the Tom Clancy novel of the same name, this Cold War naval thriller stars Sean Connery as Marko Ramius, a Russian submarine captain who absconds with an advanced nuclear sub called The Red October. Alec Baldwin co-stars as Jack Ryan, an American intelligence analyst who uncovers Ramius’ plot to defect to the United States, something the Soviet Union is hellbent on preventing.

Why watch it: You get to see Sean Connery totally half-ass a Russian accent. Aside from that, it’s amazing just how tense a few sonar pings and the creaking of a hull can actually be.

What’s it about: This isn’t as much an explicit military movie but it’s certainly military-adjacent. The story focuses on an all-male boarding school being taken over by terrorists and the resulting U.S. Army and law enforcement siege to retake the property — and the insurgency waged by captive students within.

Why watch it: It’s basically Die Hard in a prep school. What could go wrong?

What’s it about: This military courtroom drama stars Tom Cruz and Demi Moore as Navy lawyers representing a pair of Marines facing charges over the hazing death of a third Marine. It’s basically a dramatized depiction of what is (and can go) wrong with the military justice system, and hits on everything from toxic leadership, to hazing, and unlawful command influence.

Why watch it: “You want the truth? You can’t handle the truth!”

What’s it about: Trying to summarize what Forrest Gump is about is an unexpected challenge. It’s about everything — longing, loss, and love. There’s also valor and sacrifice, the value of friendship, the lack of originality in military nicknames, humility and blind luck, running, lots and lots of running… Oh, and Jenny, it’s also about a girl (and a fleet of boats) named Jenny.

Why watch it: Because Tom Hanks is a national treasure, and Forrest Gump is an American hero, even if he is entirely fictitious. Also, it provides a comprehensive list of every meal you can make with shrimp: You can barbecue it, boil it, broil it, bake it, saute it. There’s also shrimp-kabobs, shrimp creole, shrimp gumbo, and pan fried, deep fried, stir-fried…

What’s it about: Set during the Vietnam war, Operation Dumbo Drop follows a team of Green Berets who are tasked with air-dropping an elephant deep into the jungle, and escorting it to a strategically vital village, in order to earn the trust of the local populace ahead of an upcoming military operation.

Why watch it: Ray Liotta. And Danny Glover. These two in a movie together make it required viewing. Hell, you watched all those classic Vietnam flicks with firefights and bombs, and yet here’s one featuring counterinsurgency operations so prominently, you’d think it was written by David Petraeus.

What’s it about: In this thoughtful drama, Denzel Washington plays an alcoholic Army officer wrestling Gulf War ghosts as he investigates the case of a fallen Huey pilot who Congress is pushing to nominate for the Medal of Honor, but whose story may not be all that it seems.

Why watch it: While there’s not a ton of combat in this movie, it offers an honest, careful look at life in the military and how people work through their memories of war.

What’s it about: Aliens, man…

No, seriously, that’s the pitch: Aliens arrive en masse on Earth, and launch a massive coordinated surprise attack on humanity because we watched Close Encounters of the Third Kind too many times and assumed they just wanted to take part in some kind of intergalactic light show. (Note: If a giant fleet of alien ships ever does arrive on our doorstep, let’s not immediately assume that outfitting a helo with a bunch of floodlights and holding an aerial rave is a good idea.)

Why watch it: Who doesn’t love a movie about world-ending extra-terrestrial invasions and desperate plans to stop the colonization of earth and the extinction of mankind? Aside from all that, Independence Day provided American movie-goers with the single greatest presidential address of all time:

What’s it about: Set during the opening days of the Invasion of Normandy Invasion, the film follows a small squad of U.S. Army Rangers, led by Tom Hanks’ Capt. John Miller. The soldiers are tasked with finding and rescuing Pvt. James Francis Ryan, whose three brothers have all been killed in combat. Day after day, Miller and his men are forced to wonder whether saving one man among many, to minimize a family’s grief, is worth all the risk.

Why watch it: Beyond the stellar acting and compelling story, Saving Private Ryan provided one of the most accurate, and profoundly moving depictions of the D-Day invasion that’s ever been portrayed on screen. The 20-minute opening sequence is one that captures the brutality of combat, not through the eyes of a cameraman or a director, but from the perspective of the soldier stuck in the sand, struggling to survive in the face of so much random violence and death.

If nothing else, the Saving Private Ryan is worth watching for the Omaha Beach landing scene alone.

What’s it about: As the Gulf War wraps up, four U.S. Army soldiers in Iraq hatch an Ocean’s 11-inspired plan to steal a cache of Saddam Hussein’s hidden gold, and, well, it goes about as poorly as you’d expect a heist in a war zone to go.

Why watch it: It’s the ultimate American fantasy, a victorious (and short-lived) war, a daring heist perpetrated against an unquestionably awful regime, and a feel-good ending wherein the protagonists pull a last-minute Robin Hood and hand off the gold to a bunch of Iraqis seeking to escape the violent reprisal of a brutal dictator.