9 fascinating military facts about ‘Starship Troopers’ you may have missed

Critics may have spent last two decades arguing over Paul Verhoeven’s message, but they’ve missed some of the more interesting military components to 'Starship Troopers' — details that might even be news an eagle-eyed film buff 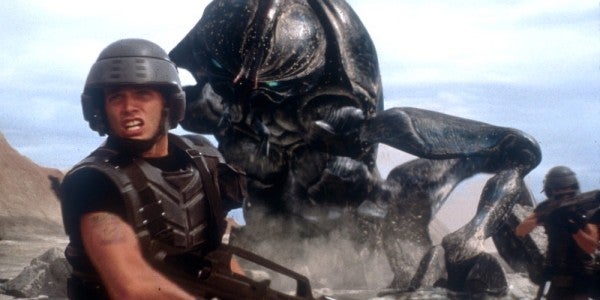 Editor's note: A version of this post first appeared in 2017.

When Starship Troopers first premiered on Nov. 7, 1997, America was in a martial slumber. Desert Storm was in the rearview mirror, the NATO intervention in Bosnia had wound down, and next to nobody had heard of Osama bin Laden. It was an era in which you could still finish an entire enlistment without earning a National Defense Service Medal. And for thousands of young, amped troops cooling their heels in garrisons around the world, the bloody, explodey, campy movie adaptation of Robert Heinlein’s legendary military science fiction epic was a collective wet dream.

Director Paul Verhoeven had intended the flick as an entertaining but self-aware warning against the dangers of militarism. But apparently, that message was too subtle: Hoighty-toighty movie reviewers initially dismissed Starship Troopers as a full-throated endorsement of military-led totalitarianism.

To which more than two decades of service members have basically answered: Well, yeah. But holy shit, is it cool! From 0311 grunt recruits at Parris Island to well-heeled midshipmen at Annapolis — where Heinlein himself trained as a surface officer — fans in uniform recognized the movie for what it really is: A tribute to the everlasting glory of the trigger-pullers.

Critics may have spent last two decades arguing over Verhoeven’s message, but they’ve missed some of the more interesting military components to Starship Troopers — details that might even be news an eagle-eyed film buff. Here are nine such facts to help you win the next DFAC debate over who’s a true military Starship Troopers fan:

Starship Troopers used more ammunition than in any previous film.

Veteran weapons coordinator Robert “Rock” Galotti — whose credits include Jarhead, Face/Off, Mission: Impossible II, and a stint wielding an M16 and M34 white phosphorous grenade in 1986’s Platoon, claimed that the crew expended over 300,000 blank rounds during the course of filming — a personal record at the time. Given film studios’ current dependence on CGI, it’s unclear if that record has ever been broken.

The standard firearms used by the Mobile Infantry were based on Ruger rifles.

How do you make a Starship Troopers-style Morita assault rifle? First, according to the sci-fi weapons blog Future War Stories, you need a cool name like Morita (a nod to Akio Morita, a cofounder of Sony). Then, you need a Ruger Mini-14. Wrap it in a modified MZ14 Bullpup stock, of the sort you might recognize from Total Recall (another Verhoeven film). Don’t forget to slap a 12-gauge Ithaca 37 shotgun up underneath that baby, too.

The Morita Mk. II “Advanced Systems Rifle,” the mountain-annihilating rifle featured in federal propaganda at the end of the original film, isn’t based on any existing real-life firearm. It is, however, referred to as the “Morita Tonshi” — Japanese for “sudden death,” per Future War Stories.

Director Paul Verhoeven got his start thanks to the Dutch military.

Although the director started his life as an academic, earning degrees in math and physics, he ended up joining the Royal Netherlands Navy as a conscript after realizing that the subjects “didn't really touch me on an emotional level,” Verhoeven said in a 2010 conversation with The Hollywood Interview. During his service, he was assigned to the Navy’s documentary film unit; his 1965 documentary on the Netherlands Marine Corps (“Het Korps Mariniers,” or the Royal Dutch Marine Corps) was his first award-winning work — even if it was a French award.

The film has virtually no relationship with Heinlein’s original book …

Heinlein’s 1959 novel stands out in American science fiction for several reasons: its controversial legacy as a pro-militarism, fascism-embracing tract that one contemporary sci-fi writer called “a book-length recruiting poster”; its plodding, often preachy structure as an exercise in military philosophy punctuated by rare moments of action; and its role in introducing the idea of powered armor into the American imagination (suck it, Iron Man).

But Verhoeven’s 1997 film, praised for inverting Heinlein's post-World War II bugle-blowing into a satirical send-up of fascism, wasn’t even based on the original novel. According to a November 1997 analysis in American Cinematographer, the movie was originally based on a completely different script and dubbed Bug Hunt On Outpost 9, which was already in production when producers Jon Davison and Alan Marshall licensed the rights to Heinlein’s work and incorporated characters and other plot elements into the film.

In an August 2012 interview with Empire, director Verhoeven claimed that he attempted to digest Heinlein’s science-fiction opus, but bailed after just two chapters “because it was so boring,” primarily due to the latter’s long, winding asides on political and moral philosophy.

“It is really quite a bad book,” Verhoeven said. “I asked Ed Neumeier to tell me the story because I just couldn't read the thing.”

It wasn’t just structure that deterred Verhoeven from exploring a more faithful adaptation, but the same quasi-militaristic elements that made critics of Heinlein’s original work so queasy. “It's a very right-wing book,” he told Empire. “And with the movie we tried, and I think at least partially succeeded, in commenting on that at the same time … All the way through we were fighting with the fascism, the ultra-militarism. All the way through I wanted the audience to be asking, 'Are these people crazy?'”

Born in Amsterdam, Verhoeven grew up watching German munitions destroy the city of Rotterdam; he was threatened at gunpoint by Nazi goons when he was just 6 years old, according to The Hollywood Interview.

As a result of his personal experiences with fascism, he incorporated elements of Hitler’s feared SS paramilitary squads into the setting of Starship Troopers, drawing inspiration for the Terran Federation’s flag from the Nazi Party’s Ordnungspolizei (“Orpo” flag). The movie’s famous opening sequence, featuring propaganda from the state-run Federation Network, was an explicit tribute to Leni Riefenstahl’s infamous 1935 Nazi propaganda classic Triumph of the Will.

“The first shot is taken from Triumph of the Will,” Verhoeven told Entertainment Weekly in 1997. ”When the soldiers look at the camera and say, ‘I’m doing my part!’ that’s from Riefenstahl. We copied it. It’s wink-wink Riefenstahl.”

The tribute was, of course, in the service of Verhoeven’s larger inversion of Heinlein’s militarism. ”I wanted to do something more than just a movie about giant bugs,” he told Entertainment Weekly. ”What I tried to do is use subversive imagery to make a point about society. I tried to seduce the audience to join society, but then ask, ‘What are you really joining up for?'”

Steven Ford — the actor son of President Gerald Ford whose credits include Grease, Black Hawk Down, and When Harry Met Sally — has a minor role in the film as Lt. Willy, the commander of Willy's Wildcats who bites the dust during the Battle of Klendathu. Ford has minimal dialogue, but his instructions to Johnny Rico and the rest of the mobile infantry before dropping into enemy territory are infamous among superfans: “You kill anything that has more than two legs, you get me?!”

The bug invasion on Planet P is a tribute to epic 1964 war film Zulu.

The fortress defense sequence in the film’s third act contains multiple references to the epic British war film that depicts the 1879 Battle of Rorke’s Drift, in which a company of British and colonial soldiers held off a prolonged assault by Zulu warriors for more than a day. Some of the dialogue — “We're all gonna die!” “Fire at will!” and “Fall back into the compound!” in particular — are cribbed directly from the war drama.

Bonus: Verhoeven and cinematographer Jost Vacano shot that infamous shower scene in the nude themselves.

This doesn’t have much to do with the military, but it’s too hilarious not to include. The movie’s infamous coed shower sequence — not an unexpected addition, considering Verhoeven introduced Americans to a three-breasted alien prostitute in Total Recall — nearly didn’t make it into the final film. Not because of censors, but because of an actor’s cold feet (or other extremities).

“One cast member said they would only get naked if we did,” recalled Verhoeven in his conversation with Empire. “Well, my cinematographer was born in a nudist colony and I have no problem with taking my clothes off, so we did.”