Starship Troopers Is Getting A 21st Century Reboot 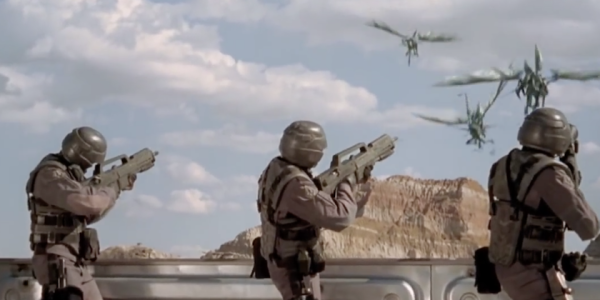 Great news for guys who came of age in the 1990s: “Starship Troopers,” the epic 1997 sci-fi film directed by Paul Verhoeven, is getting a reboot. In case you’re too young and worthless to remember “Starship Troopers,” it’s a film, set in the future, about a bunch of really good-looking soldiers who party and kill giant alien bugs in outer space. And now, thanks to everyone’s current obsession with 1990s pop culture, and Hollywood’s timeless obsession with making tons and tons of money, it’s coming back so we can watch it again.

Look, this is Task & Purpose, not BuzzFeed. I’m not going to sit here and wax nostalgic about how “Starship Troopers” is the best movie ever made. If I watched it now, I’m sure I’d find the acting cheesy, the CGI unimpressive, the military tactics laughable, and that scene where Johnny Rico and Dizzy finally hook up not nearly as “stimulating” as I did during puberty. It’s like when you go back and listen to Limp Bizkit and realize that rap-rock is the musical equivalent of putting ranch dressing on spaghetti.

But when I was a spiky-haired, baggy jeans-wearing kid in the 90s, “Starship Troopers” was absolutely, 100%, without a doubt the best movie ever made. To my adolescent eyes and ears, it was a cinematic masterpiece — the “Citizen Kane” of my generation, the “Farewell to Arms” of the Blockbuster Age. It was also my first real introduction to all the things I’d grow up to enjoy: sex, alcohol, shooting stuff, war. Come to think of it, I’m pretty sure “Starship Troopers” was the reason I joined the Army.

Hollywood knows that Starship Troopers heavily influenced me and my peers during our Korn-obsessed formative years, which is why they’re resurrecting the franchise. That’s what Hollywood does now. They take the stuff we loved in our youth, give it a sweet little 21st century facelift, and then sell it back to us for, like, five times the original ticket price. It’s fucking brilliant.

The project was just announced, so details are scarce, but here's what we know so far. First, Columbia Pictures has tapped the guys behind the upcoming “Baywatch” movie to pen the script, so you can bet your ass there’s going to be plenty of babes on Planet P (in case you forgot, that’s where the bugs live). Second, this isn’t going to be a remake of the 1997 film or even a sequel. Instead, the producers are drawing material directly from the 1959 novel that the first film was loosely based on, which means the reboot could be totally fresh and surprising and different.

Some poor trooper gets his head sliced off by an alien bug in the original Starship Troopers.Screen grab from YouTube

Will it be? Probably not. Will the success or failure of the film completely hinge on whether guys like me are still loyal enough to the “Starship Troopers” franchise to give it another go? Probably so; although, that strategy didn’t seem to pay off for the sequels, all three of which went straight to DVD. But, hey, I might be wrong. “Starship Troopers,” the novel, is widely regarded as one of the best in the sci-fi genre. If the producers of version 2.0 stay true to the book, as they’re promising to do, there’s a chance it could be an upgrade from the first.

Either way, it doesn’t matter. The original version was good enough. That’s why it’s getting a reboot.