Finally, We’re Getting a TV Series With Real SOF Stories From Iraq And Afghanistan

On April 7, 2004, Eddie Wright was an assistant team leader with 1st Reconnaissance Battalion near Fallujah, Iraq, when the... 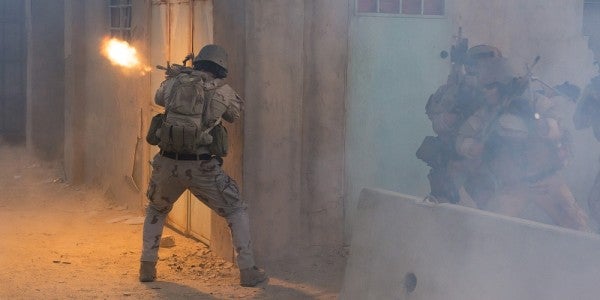 On April 7, 2004, Eddie Wright was an assistant team leader with 1st Reconnaissance Battalion near Fallujah, Iraq, when the convoy he was in was caught in a deadly ambush. A rocket-propelled grenade slammed into Wright’s Humvee, and the ensuing blast took both his hands and a chunk of his leg.

The Marines of 1st Platoon, Bravo Company — one of the most decorated platoons for heroism in a single action in the War on Terror — dismounted and assaulted the enemy, estimated to be anywhere between 30 and 100 strong. They fought through fear, chaos, and enemy positions alike, remaining calm in the face of overwhelming fire, and ultimately, won the day. But victory came at a heavy price. Their platoon commander, Capt. Brent Morel, was fatally wounded leading the assault on the enemy position.

This story is just one of the four instances of heroism, sacrifice, and battlefield bravery depicted in the HISTORY Channel’s upcoming documentary series, “The Warfighters.”

Through a mix of reenactments, intimate interviews, and footage shot by the veterans themselves, “The Warfighters” offers a rare look into the secretive world of special operations and similar elite units. Since 2001, the military’s special operations forces have been on the front lines of the Global War on Terror. Their stories are those of men who saw the horrors and heroism of war in Iraq and Afghanistan firsthand.

All too often, TV documentaries approach combat in an almost voyeuristic fashion: “As the Marines prepare to breach the door, there’s no telling what lies beyond,” murmurs some throaty narrator, before adding, “Find out after this commercial break.” Suspense is forced, and tension added in lieu of reflection. However, that’s where “The Warfighters” sets itself apart.

The series has no narration aside from the veterans themselves, and their personal accounts of combat and the camaraderie that exists in a tight-knit unit under fire are the driving forces behind the series.

The reenactments themselves are the quality you’d expect from a blockbuster war movie, not a television documentary series, but unlike a big budget film, “The Warfighters” doesn’t glamorize combat. It’s gritty, bloody, and chaotic, with the camera lurching left and right, while the men who are being represented on screen talk the viewer through each moment in visceral detail.

“The Warfighters” is executive produced by Peter Berg, who also directed “Lone Survivor” and “Friday Night Lights.” It premieres Nov. 11, Veterans Day, on the HISTORY Channel with a four-episode marathon beginning at 8 p.m. eastern time.