6 Ways World War I Still Affects The Way You Serve

From rank structure to doctrine, World War One's impact on the U.S. military is significant. 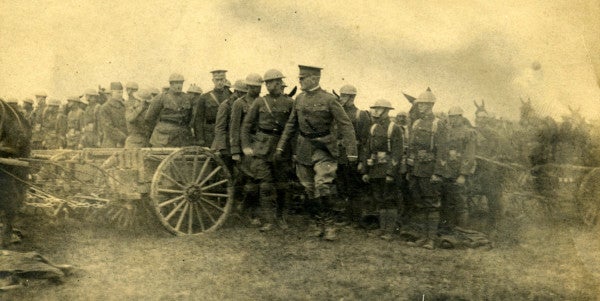 Editor’s Note: This article was published on April 4th, 2017.

April 6, 2017, marks the 100th anniversary of the U.S. declaration of war on Germany during World War I, officially ending American neutrality in a conflict that had been raging for three years. World War I doesn’t always get the kind of adoration, interest, or Hollywood attention that World War II or the Vietnam War does, but for those of us who are serving today, there are some big reasons to take notice. Here are six reasons that World War I matters in your daily life if you’re in uniform.

Did you ever think of the American military as modeling ourselves after the French? Well, if you’ve ever run an operations order through the G-2 and G-4 before publishing it at the G-3, or even turned your leave request into the A-1, you’re experiencing a form of the “continental staff system.” Prior to World War I, the American military was more directly hierarchical and less specialized. While allied with the French in World War I, Americans began to adopt the staff system the French were were using, which was itself adapted from the Prussian system, and found it led to more speed and independence in battle. And, with this move, we opened the pathways for generations of staff POGs to follow.

Becoming an officer in 19th-century America usually involved higher education, social standing, and family connections. Aside from West Point and the Naval Academy, military training was a learn-as-you-go system that varied greatly from camp to camp and the particular whims of your sergeants. (No matching yellow footprints here!)

Creating the American Expeditionary Force required the Army to expand by 20,000 officers in two years. This was far more leaders, far faster than noblesse oblige could pick from the sons of a few families. Even the National Guard and a system of small training camps nicknamed “Plattsburgs” that had sprung up across the country couldn’t create the volume or quality needed for the war. Officer training camps were established with incredible speed after the war declaration, forming some of the first standardized initial entry training. Incredibly, 74% of Army officers in World War I were commissioned with just 90 days of standardized training. The camps set a precedent, which much more closely mirrors today’s ideals of the military as a great equalizer. Meritocracy and standardized training are now policy across the branches of service, officer and enlisted. The desire to never have to rush to create leaders from scratch again led to the creation of ROTC, now by far the largest source of commissions.

Did you go to basic training at Fort Benning or Fort Jackson? Did you ever look at Fort Lewis or Fort Gordon for your next assignment and roll your eyes? Then you bumped into just a few of the remnants of a massive system of training camps set up across the country. Military bases before World War I tended to be on our nation’s coasts, borders, and critical cities. In other words, defensive locations. In preparation for war, Gen. Leonard Wood (doesn’t that name sound familiar?) began to win the public over to the idea of training and preparing for an eventual overseas war. Wood insisted that the camps be near major cities for ease of supply and debarkation, and preferred warmer climates for year-round training. These bases sprang up around the South and Midwest, a pattern that the Navy and Air Force adopted. Your assignment “dream sheet” hasn’t looked the same since.

American troops going forward to the battle line in the Forest of Argonne, Sept. 26, 1918.Photo via National Archives

World War I is best known as the era of trench warfare. This was undoubtedly true through the first years of the war, but by the time America committed in 1917, we knew that if we continued to use those tactics, the war would never end. The American entry into the war was also a call to innovate and figure out how to operate in what we might now call “multi-domain battle.” The machine gun, submarine, airplane, and tank had all changed how many dimensions in which warfare operated. The evolution of new ground tactics would be a major factor in the outcome of the war. Many of the tactics that we learn in our basic training came out of this era, from simple factors like buddy rushes to techniques in taking out a machine gun bunker. If you took a soldier from the day of the World War I armistice and placed him in a Vietnam squad, he’d know how to operate better than if you put him in a Spanish-American War column.

Most of us these days have spent our careers ducking in and out of green, tan, or even blue camouflage. Through most of our military’s history, uniforms were brightly colored. In fact, the pageantry was a tactic used to intimidate enemies. To one extent or another, camouflage had existed since the ancients, but in World War I, khaki and olive drab became the standard issue for “doughboys.” Meanwhile, the French began hiring painters to design patterned, multicolored camouflage. Naval vessels began to be painted “haze gray” by default, while the British-designed “Dazzle” camouflage made ships much easier to see but harder to target using a pixilation method similar to the current Marine Corps digital camouflage uniform. Most of us enjoy a special event in dress uniforms, but we owe the fact that we’re not out in the woods in a rainstorm in our mess dress to World War I.

World War I was a sharp turning point in the history of who was offered the opportunity to serve in uniform. Though African-American soldiers had served previously, at the start of World War I, mobilizing the segregated “separate units” was controversial and many attempts were made to limit the two all-African American divisions to non-combat duties. But the necessities of war, the talent and tenacity of those soldiers, and the racial attitudes of their French counterparts resulted in African-American units distinguishing themselves on the battlefield. American commanders were uncertain about the African-American divisions, but were willing to turn them over to French commanders who equipped the units with French weapons and gear and deployed them in battle. Though there was controversy if these troops would get the same wine rations the French troops did, they exceeded the highest standards of the French — or American — Army.

The Harlem Hellfighters, mobilized from a New York National Guard unit, earned the prestigious Croix de Guerre, similar to the Medal of Honor, for their actions in bitter combat. Their triumphant homecoming parade up Fifth Avenue, 3,000 strong, was welcomed by a massive crowd of New Yorkers in a watershed moment in race relations for the city. Many of these individuals, empowered by their wartime service, came home and became influential in the Harlem Renaissance movement.

Women had long been involved in warfare as camp followers, nurses, or even spies, but starting in World War I they began to wear uniforms. The movement began in many of the volunteer service organizations, such as the Red Cross. Whereas in the past, women associated with the military tended to be working class, the uniformed volunteers expanded to the middle and upper classes. The 1916 Naval Act opened the door for women as official members of the military. The Yeoman (F) program, Army Nurse Corps, and Army Signal Corps “Hello Girls” uniformed and directly employed women in the military. The fight for equal ranks, pay, assignments, and even honorable discharges continued over the next century.