Why The Pentagon Is A Pentagon, And 6 Other Weird Facts About DoD’s HQ

Who’s the pointy-headed pen-pusher who put the Department of Defense in a polygon? How did the most fearsome military establishment... 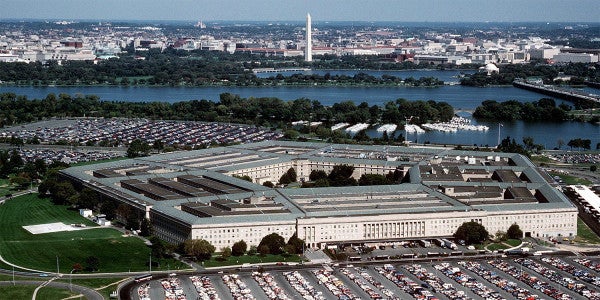 Who’s the pointy-headed pen-pusher who put the Department of Defense in a polygon? How did the most fearsome military establishment in human history end up in a squat, dull office building with miles of cookie-cutter corridors, no elevators, and twice the toilets it needed?

There’s an explanation for all that, according to Alicia Ault, author of Smithsonian magazine’s April 10 feature, “Why Is the Pentagon a Pentagon,” and the explanation is basically that the government went about building the Pentagon the way it goes about most things: punch-drunk and stupid.

The story begins in 1941, when President Franklin Roosevelt’s War Department realized that having 24,000 workers shotgunned across 17 D.C. buildings was no way to win a war against fascism. The Army’s Construction Division hastily — like, in three days — drew up plans for a unified military headquarters “that would fit a five-sided parcel of land that had been hastily purchased just below Arlington National Cemetery, on the Virginia side of the Potomac River,” Ault writes.

But that’s not where the Pentagon actually ended up. After realizing that a mega-military HQ would block views of the nation’s capital from Arlington and generally kick up some noise around the stately cemetery, FDR moved the War Department’s planned building east, evicting a bunch of descendants of freed slaves in the process.

Even though the site could accommodate a different building design, war planners stuck with the short, five-sided office building to save on steel, a valuable wartime commodity, and to keep views of the capital across the Potomac unobstructed. The Pentagon was completed in January 1943, despite protests from the government Commission of Fine Arts that it was ugly as sin.

That’s not where the weird history of the military’s mothership ends. Read on for more insane facts about the DoD’s geometric joint:

1. There used to be a hot dog stand in the Pentagon courtyard, and the Soviets were ready to nuke it at a moment’s notice.

Supposedly, Soviet satellite imagery revealed the daily movement of large groups of military personnel entering and exiting, leading the Soviet military to presume that the courtyard must contain the entrance to an underground bunker. As the story goes, the Russians trained a significant portion of their arsenal on that spot.

The foot traffic had a more, well, pedestrian explanation: The center of the courtyard housed a popular hot dog stand that served as a lunch spot for many of the Pentagon’s thousands of employees. But rumors of Russians targeting the courtyard persisted, and “this is where the building earned the nickname Cafe Ground Zero, the deadliest hot dog stand in the world,” according to a representative of the Pentagon’s facility management firm.

The hot dog joint has since been razed and replaced with a “Center Court Cafe,” but the courtyard’s morose nickname persists.

2. You wanted an elevator in your Pentagon? Too bad. Here’s a concrete ramp!

Seeing as the military had other priorities during the Pentagon’s wartime construction, contractor John McShain scrimped on a lot of building materials — notably, steel, which was kind of in demand for guns and ships and other wartime goodies. Concrete, on the other hand, was cheap and easy to find, which was part of the reason why the Pentagon was built short and squat with only five floors above ground: Skyscrapers require lots of steel.

So do elevators, it turns out. According to Ault, the Pentagon was built with only 13 elevators for freight use to save on metal. Employees who couldn’t climb the stairs used concrete ramps to travel between floors. A two-decade building renovation finally gave Pentagon workers elevators — 70 of them — in 2011.

Day-to-day oversight of the Pentagon construction site fell to an overachieving Army Corps of Engineers officer, Col. Leslie Groves. It was one hell of a crap job, and Groves later told biographers that he was “hoping to get to a war theater so I could find a little peace.”

Unfortunately, Groves was so good at his work that instead of sending him to Europe or the Pacific, he was tapped to run a secret program out of New Mexico known as the Manhattan Project. After August 1945, when his team succeeded in delivering the A-bombs that were dropped on Japan to end the war, Groves’ reputation as the military godfather of the nuclear bomb was cemented.

4. For years, there was a secret (and forgotten) bachelor’s pad in the Pentagon.

During the Pentagon construction project, Groves leaned heavily on one of his aides, Capt. Robert Furman — one of a few men who could apparently jibe with Groves’ abrasive style. One way Furman coped with Groves’ demands was to not go home after work; rather, he’d sleep and shower in a “a small, windowless apartment built inside the building, between the walls,” according to Defense Media Network’s Brendan McNally. Several years later, when Furman’s work took him back to the now-completed Pentagon, “he was surprised to find the apartment undiscovered and exactly as he’d left it.”

When Groves took over the Manhattan Project, he sent Furman on a years-long mission to gather intel on the Germans’ atomic bomb project. To avoid spies and scrutiny, Furman wouldn’t rent a hotel room on his return trips to Washington; instead, he’d head to the Pentagon, “sneaking back to the Ordnance Bay, waiting till no one was looking, then popping open the wall panel just enough to slip inside his pad, spending the night, and slipping out again in the morning.”

5. The Pentagon has twice the toilets it needs, thanks to segregation.

The Pentagon isn’t in Washington, of course; it’s in Virginia. In the early 1940s, state law still mandated separate bathroom facilities for African Americans. So that’s what Groves ordered designers to build in the Pentagon.

During construction in spring 1942, President Roosevelt toured the Pentagon and inquired about “the reason for such prodigality of lavatory space” everywhere he went, according to Pentagon historian Steve Vogel. The previous June, FDR had signed an executive order barring discrimination against government employees, and the Virginia governor had granted the federal government jurisdiction over the Pentagon site. Perhaps for these reasons the redundant restrooms were never actually labeled “white” and “colored.”

You already know the place is big — like, “twice the square footage of the Empire State Building” big. Turns out it’s also a great PRT-training regimen for tour guides like Seaman Nathan Winn, profiled above.