The Best Pair Of Boots This Ranger Has Ever Worn

We may earn revenue from the products available on this page and participate in affiliate programs.   “See that tree... 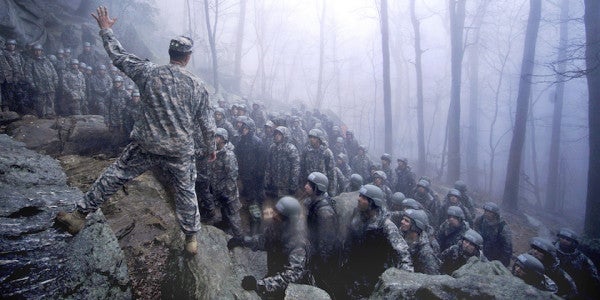 “See that tree line over there?” The fat pinch of chewing tobacco in the sergeant’s lip muddled his speech as he calmly addressed our ragged formation. “I want you to go touch,” he said, pausing to spew a stream of brown liquid at the ground. “Actually, no. Go bring me that fucking tree line.”

There was a very brief moment of silence as we — RIP class 07-06— collectively exhaled into the cool night air. Then, like a pack of dogs, we took off at a sprint for the wooded area, scrambling to retrieve a stick, a branch, anything that might appease the combat hardened Ranger; although, we knew, and he knew, that no amount of foliage would save us from the punishment of Cole Range.

The path from prospective Ranger to actual Ranger is fraught with physical and mental challenges. The coveted khaki beret is earned by those who don’t give up — those who, despite the impossibility of the task, try to bring back that tree line. A ‘too stupid to quit’ attitude will not be enough, though. A Ranger requires intelligence. A smart Ranger knows that physical preparedness is paramount to mission success. And that means keeping your feet in fighting shape. You need good boots that can stand up to anything while ensuring that you will still be ready for the next mission.

For many of my classmates and I, the choice was obvious: most of us bought a pair of “jungle boots” and broke them in before day one. Pliable, comfortable, and ideal for traversing the various types of terrain encountered throughout our Georgia training grounds, jungle boots weren’t just a luxury; they were a necessity. Unfortunately, for aesthetic reasons, the Army stopped allowing soldiers to wear them in the mid-aughts. But the boot’s performance and comfort under extreme conditions stuck with me, and I keep a pair to this day for any activity that involves long foot movements or water crossings. Whether it’s stalking antelope on the high plains of South Dakota or long portages between lakes in the Boundary Waters of Minnesota, they have continued to hold up to any demand I make of them.

The jungle boot has deep roots in military history. The design was first tested by an experimental platoon in Panama in the 1930s and received positive initial reviews. The boot made its battlefield debut during World War II, when it was issued to units fighting in jungle environments such as the famed Merrill’s Marauders, who wore them in Burma. But it wasn’t until the Vietnam War that the boot came into wide use. During the war, the jungle boot was issued to nearly every service member deploying to Southeast Asia. It was then, because of the very real threat of punji stake traps troops faced in Vietnam, that a steel plate was added into the sole to protect the foot from debilitating injuries.

The jungle boot continued to evolve in the decades after the Vietnam War, but the essence of what made it great remained the same. With the threat of punji stakes gone, many started removing the steel insert, as that addition was pretty hard on the knees if you were walking on hard surfaces. Even though the boot isn’t issued to the generation of troops serving in the military today, it continues to serve as the blueprint for the current design of standard-issued desert boots.

So what distinguishes the jungle boot from its successors? Let’s begin with the sole. Called the “Panama Sole,” it is designed in a way that pushes mud out from beneath the boot rather than staying trapped in the lugs, which often happens with the Vibram soles affixed to most modern boots. Then there’s the construction of the body, a durable combination of leather and canvas. Once broken in, the black leather heel and toe fits as comfortable as a glove. Meanwhile, to combat fungus and bacteria, the OD Green canvas neck works in concert with two screened eyelets to ventilate and circulate fresh air to the feet while draining any water that comes in.

Finally, jungle boots are designed with abuse in mind, which makes them a real workhorse in the field. You can put thousands of miles under your feet with these boots on and they won’t let you down. With most boots, you hope to get a few good years of hard work out of them. With a pair of jungles, you can expect a few good decades.

But here’s what really matters: jungle boots are, hands down, some of the most comfortable boots I have ever worn. Breaking them in will bring you a blister or two, but once you get them there they are a joy to walk long distances in. Although they are notable for their performance in humid sub-tropical environments, their performance is exceptional in nearly any environment you might find yourself. They even perform well in cold weather with the right socks. Of course, if you are doing some extreme mountaineering, you’ll want to put something on your feet specifically designed for the task, but for anything else you won’t get more bang for your buck than a pair of jungles.

Like many veterans, my enduring love affair with jungle boots began during one of the most trying episodes of my life. They’ll forever represent the good times and the bad; they’re synonymous with long miles, shared hardship, and impossible tasks. For me, I think of diving into the makeshift mud pond that Sergeant Turner made with his Jeep out at Cole Range. I think of getting back to the barracks after a long foot movement and seeing little drops of blood squeeze out of the eyelet on my buddies boot as he limped towards his locker. And now, when I put them on before a long hunt, fond memories take a backseat to the task at hand, because I lace them up knowing they won’t let me down.