Why Do So Many Recent Veterans Dislike Police Officers? 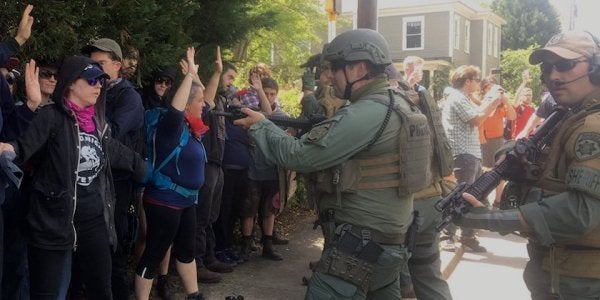 Tom note: Here is the fourth entry in our 10 Long March posts for 2018, the 7th most-read item of the year, which originally ran on April 23, 2018. These posts are selected based on what’s called ‘total engaged minutes’ (the total number of time spent reading and commenting on an article) rather than page views, which the T&P; editors see as a better reflection of Long March reader interest and community. Thanks to all of you for reading, and for commenting–which is an important part of this column.

The April photos out of Newnan, Georgia, of local police pointing rifles at peaceful demonstrators over the weekend, reminded me of a running discussion I’ve been having with several friends: Why do so many of our recent veterans dislike police officers?

The first answer, which some have said to me, is that the cops treat them like they treated Afghans and Iraqis, with weapons, flex-ties, and shouts that often were not understood. A second answer is that while our vets were off fighting our wars, a lot of local police militarized after 9/11, getting body armor, military helmets, automatic weapons, and even wheeled armored vehicles.

But a third, more complex answer, on top of those two, is that the soldiers feel they were well trained to use all that tactical gear, but that the police are not — and that is dangerous.

“The worst thing we can do is give police military equipment without the training that needs to go with it,” Aaron Barruga, a former Special Forces soldier, wrote in my old Best Defense column. “Without such training, departments that are given military equipment simply will informally make up their own tactics. This uncertainty can lead quickly to tactics that are actually dangerous to officers and citizens alike.”

What do you think, commenters? Are you under 35 or so, and if so, have you felt this way toward the police? (Old white guys, your experience is different. When I got pulled over on I-95 in Maine in December in our rental Behemoth, after a deer clobbered our Subaru, the State Trooper smiled and said, “I have to ask this: Do you have any drugs in the vehicle”?—and then he laughed. My wife said, “Well, Ambien.”)