It looks like the F-14 Tomcat will be making an appearance in “Top Gun 2.” Although actor Tom Cruise announced... 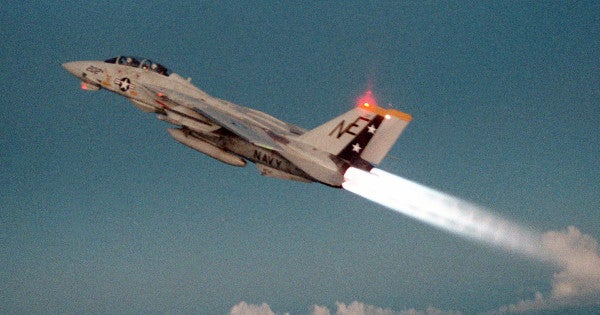 It looks like the F-14 Tomcat will be making an appearance in “Top Gun 2.”

Although actor Tom Cruise announced the first day of filming back in May with an Instagram post of himself in front of an F/A-18 Hornet, he may end up back behind the stick of the Tomcat he flew in the 1986 original.

The website Hollywood Pipeline has published a bunch of photos of Cruise and Miles Teller — who will play Goose's son Bradley — on set up in South Lake Tahoe, California. Most interesting to me is the photo of a hangar with an F-14 inside, a full-size M1 Abrams tank, and the pair of actors walking around in flight suits, because the mustachio'd Teller looks very much like a younger version of Maverick's radar intercept officer, Nick Bradshaw.

The local news website South Tahoe Now reported on Tuesday that California Highway Patrol had escorted a wide-load truck carrying the F-14 up to the site.

How it will actually be used in the film is anyone's guess, but you can check out the new images below:

SEE ALSO: The Crew Of ‘Top Gun 2’ Built A Bar On The Beach In San Diego