Why Maverick is still a captain 30 years after ‘Top Gun,’ according to the Navy

How is it that Pete "Maverick" Mitchell is still flying combat missions in an F/A-18 Super Hornet as a 57-year-old captain after more than 30 years of service? 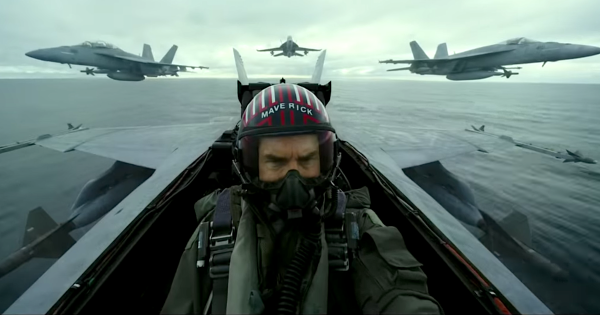 The new trailer for Top Gun: Maverick that dropped last week was indisputably the white-knuckle thrill ride of the summer, a blur of aerial acrobatics and beach volleyball that made us wonder how we ever lost that lovin’ feeling in the decades since we first met Pete “Maverick” Mitchell back in 1986.

But it also made us wonder something else: Why is Maverick still flying combat missions in an F/A-18 Super Hornet as a 57-year-old captain after more than 30 years of service?

We’re clearly not the only ones curious as to why Maverick hasn’t moved on to other ventures like, say,flying a cargo plane full of rubber dog shit out of Hong Kong. Indeed, Ed Harris’ unnamed rear admiral explicitly addresses Maverick’s career trajectory in the trailer.

“Thirty-plus years of service. Combat medals, citations, the only man to shoot down three enemy planes in the last 40 years. Yet you can’t get a promotion, you won’t retire, and despite your best efforts you refuse to die,” Harris scowls. “You should be at least a two-star admiral by now. Yet here you are. Captain. Why is that?”

Yes, why is that?! Luckily for Harris and everyone else who’s paying close attention, the Navy has answers. Here’s what Navy Personnel Command told USNI News of Maverick’s circuitous return to the big screen:

The most straightforward answer to have a captain with 35-plus years of service is for the captain to have previous enlisted experience. In the case of Maverick, this scenario doesn’t fit with the movie’s timeline – Maverick was a lieutenant in 1986.

Another possible scenario occurs if there’s a break in service. For instance, perhaps at some point after the famous incident involving MiGs of uncertain origin over the Indian Ocean, as depicted in the first “Top Gun,” Maverick left active duty and did some time in the Navy Reserve. Then later, he returned to active duty. With more than five years in the reserves, Maverick could be pushing 37 years in uniform.

So it looks like Old Man Maverick’s time in the Super Hornet wasn’t just a product of some silly script doctor’s imagination. Then again, that’s not totally surprising: Paramount Pictures consulted closely with the Navy on the how to keep the production in line with the real-world U.S. armed forces just as much as it did with the original Top Gun, according to the production agreement published by the Washington Business Journal.

Apart from using DoD property and personnel for the film, the production agreement stipulated that a senior staff officer would “review with public affairs the script’s thematics and weave in key talking points relevant to the aviation community” and that the Pentagon officials would review a rough cut of the film to “confirm that the tone of the military sequences substantially conforms to the agreed script treatment.”

Thanks God the producers didn’t opt for a Top Gun sequel featuring Admiral Maverick: two hours of on-screen paperwork and hanging out with sketchy Malaysian shipping magnates would make for a shitty, shitty movie.