In 1986, Top Gun flew into theaters — and into our hearts. Sure, Tony Scott’s military rom-com opus didn’t wow critics... 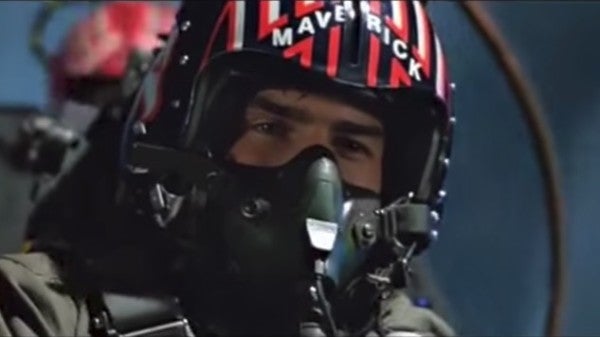 In 1986, Top Gun flew into theaters — and into our hearts. Sure, Tony Scott’s military rom-com opus didn’t wow critics and moviegoers when it first premiered, but it quickly became one of America’s favorite military classics. I mean, Top Gun has everything. Tom Cruise! F-14 Tomcats! Angry, cigar-smoking staff officers! Sweet motorcycles! Volleyball!

But despite the film’s glory, there’s one element of Top Gun that’s been the cause of angry yelling much debate in the Task & Purpose office in recent days: just who, exactly, are those ballsy Navy aviators supposed to be fighting?

Underside view of a MiG-28Paramount Pictures

Let’s break it down. The enemy planes encountered by Cruise in the closing act of the film are actually F-5E Tiger IIs of the Navy Fighter Weapons School, the lightweight aircraft used as aggressor aircraft during exercises in the 1980s (the aggressor aircraft Tom Cruise kills below the hard deck in the film was, in fact, a Douglas A-4 Skyhawk).

The MiG-28 moniker reportedly evolved from a pile of script rewrites, likely a slight nod to the then-secretive MiG-29 Fulcrum. But it’s worth noting that in one draft of the script by Chip Proser, the enemy fighters are MiG-21s, an aircraft that has existed since the late 1950s. This suggests that early drafts of the script were in the works well before the 1986 release. Interestingly enough, F-14s did engage MiG-21s in air-to-air engagements — but they were Iranian F-14’s squaring off against Iraqi MiG-21’s.

Based on the timing the of the script-writing process and Top Gun’s actual release, the go-to assumption is that the MiG-28 is a Soviet fighter. However, the markings on the fictional MiG-28 aren’t Soviet. The MiG-28 in the film has a single red star surrounded by a yellow circle on their tail as their only marking, while Soviet aircraft traditionally had a white trim to their red star (just to cover my bases, the North Korean Air Force uses a blue trim). However, one country does, in fact, use yellow trim on their red star insignia: China.

That the enemy was never officially established in Proser's early draft or Jack Epps Jr's final script. This was likely intentional: villainous governments in the movies are routinelyleftvague as to not piss off their real-world counterparts, with the exception of North Korea, possibly because North Korea doesn’t have a strong market for movies or video games. Indeed, the video game “Homeland” and the Red Dawn rebootfilm, both of which involve a North Korean invasion of the U.S., made course corrections in production to keep from angering the Chinese government.

The tail markings on a MiG-28Paramount Pictures

Despite the markings, North Korea is still a good guess. Producers Jerry Bruckheimer and Don Simpson had more than one writer working on the Top Gun script. Along with Proser’s draft, Jim Cash and Jack Epps, Jr. were hired to write another draft of the screenplay for the film that initially identified North Korea as the threat that Maverick and Co take on in the thrilling finale. Per Dr. Bob Arnett’s research on the topic:

After graduation, Kirsten and Maverick part. The squadron returns to its carrier. A hostage situation with an American ship surrounded by North Koreans develops. Maverick and Wolfman fly into action against North Korean MIGs. Wolfman is killed. Maverick is wounded, but still manages to finish off the remaining MIGs. In the last pages, Maverick appears at Kirsten’s gym and tells her he’s back to be an instructor at the Top Gun school. Maverick, then, is “restored” to his hero status and to the romance with Kirsten.

After this draft was picked up for the feature film, it was rewritten by legendary script doctor Warren Skarren, who not only added the timeless flipping of the bird in the initial MiG scene but shifted the encounter’s setting location of the Indian Ocean. This is a key change, one that eliminates North Korea and China from likely operating in this area due to geographic realities: In the 1980’s, China was not operating any aircraft carriers, and as mentioned above the closest sea border to China from the Indian Ocean is in the South China Sea, which is ostensibly part of the West Pacific.

The U.S.S. Enterprise in the Indian OceanParamout Pictures

The intentionality of keeping the villain an amorphous combination of three countries is almost ingeniously done by combining impossible geography, mismatched markings, and fictional aircraft. According to one theory, the United States was in the process of cooling things down with North Korea, so the producers didn’t want to overtly call the enemy North Korea and ruin Reagan's foreign policy agenda.

Yes, Top Gun is not a documentary. But it is honestly a credit to the film’s greatness that even the most discerning audiences were able to easily suspend disbelief over details like these. Perhaps taking a fun movie too seriously is the wrong approach — but if we don’t hold the production folks in Hollywood liable for their terrible military design choices, no one will.