Novel Excerpt: 1st Day At The Pentagon, And They’ve ‘Reorganized’ My Job

I don’t think I’ve ever run an excerpt from a novel before. So here goes.—Tom By Kathleen McInnis “I take... 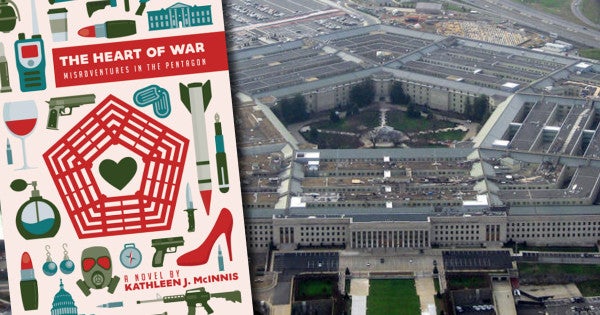 I don’t think I’ve ever run an excerpt from a novel before. So here goes.—Tom

“I take it you weren’t informed of the reorg?” Voight finally said.

I collected my bright yellow badge from the attendant and we started walking. Voight swiped through the waist-high security barriers while a guard let me through, and then we stepped onto a set of escalators.

“Where do I start?” Voight continued, rubbing his chin and moving out of the way of the escalator traffic. “That’s one of the many frustrating things about this place—they’re always reorganizing. This is the third one I’ve gone through in two years. I’m beginning to think that all of these reorgs are part of an elaborate counter-espionage strategy. How can any foreign intelligence agents know what we’re doing, when we barely know where we’re reporting to work every day?”

“Okay, but I’m not following. What does all this have to do with me?”

“I really have no idea how to put this to you, Heather.” We stepped onto an escalator taking us up to the next floor. “But the bottom line is that your position got shuffled in the reorg.”

“Shuffled?” I asked, feeling the early stirrings of acid reflux.

“So, one of the things you should know about this place is that it’s actually easier to deploy the Fifth Fleet to the Pacific than it is to hire someone.”

“But the Fifth Fleet is based in the Middle East,” I said.

“Exactly. It either takes an act of Congress or divine intervention—or both—to become a gainful employee of the Office of the Secretary of Defense,” Voight said.

“Why? Are there budget cuts or something?”

“Sort of. There’s always budget cuts. But I’d say this is more like the unholy marriage of budget cuts and bureaucratic dysfunction. What matters to you is that when they did the reorg, they looked at your billet and decided that it was one too many in Central Asia.”

“What? Why?” I could feel myself on the verge of a panic attack, my mind racing, brainstorming escape options. But the facts hadn’t changed in the ten minutes since I’d spoken to Ryan. It was simply too late to go back to San Diego.

“Because the war’s over. We’ve withdrawn our troops—or most of them, anyway. They don’t need as many people in that office anymore.”

“Has anybody bothered to tell the Taliban the war’s over?” I said. “Or the Islamic State? There’s a civil war going on over there.”

“Let me get this straight. You’re telling me I don’t have a job here anymore?”

“Well, you see, I have good news and bad news on that front. The good news is that your paperwork was way too far along to cancel. So you have a job.”

I breathed an audible sigh of relief as the prospect of bankruptcy faded.

“Don’t get too excited. The bad news is that you’re now working in Deputy Assistant Secretary of Defense Ariane Fletcher’s office. Pronounced ‘ari-AHN.’ Or, more precisely for our purposes, ‘Ma’am.’”

“You’ve never heard of her?” Voight asked, stopping in his tracks.

“It was disestablished three or four reorgs ago, apparently.”

“Why didn’t Mr. Townfield tell me what was going on?”

“He probably figured someone else had told you.”

“And the admin people?”

“So what is my job supposed to be?”

“Beats me. I think DASD Fletcher’s figuring that out now.”

I paused while massaging the bridge of my nose. “Am I the last person on earth to know that my job has been fundamentally changed?”

“Seems like it,” Voight nodded. “But don’t worry. That seems to be par for the course around here. The last person to know what’s going on is usually the only person who is directly affected.”

Excerpted, with permission, from The Heart of War, by Kathleen McInnis. © 2018. All rights reserved.