Writing about what some called King Philip’s War, Jill Lepore reminds us of the tight-knit relationship between war and telling... 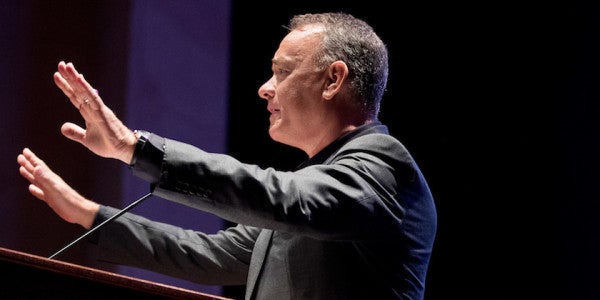 Writing about what some called King Philip’s War, Jill Lepore reminds us of the tight-knit relationship between war and telling the story of war, “War is a contest of injuries and interpretations.” Tom Hanks, an American particularly well-suited to talk Hollywood, story-telling, and narratives about war, recently shared his thoughts.

Speaking at the Washington Hilton for the inaugural D.C. event of the Elizabeth Dole FoundationHanks said, “I don’t know that Hollywood could create an authentic story about Iraq or Afghanistan, where people are on their fourth or fifth or sixth tour of duty, that could not be told much, much better by a documentary or caring news media. We argue about this all the time, what’s going to be the venue for the story that needs to be told. And many, many times it’s not a Hollywood movie.”

Hanks wants at least two things for the story he envisions: authenticity and time. He suggests that a long timeframe is necessary to tell the story of the country’s long wars especially because multiple deployments are defining features. Hollywood likes tidy endings and it like sequels, neither of which coordinates with Hanks’s vision. From Maximilian Uriarte’s The White Donkey to Phil Klay’s Redeployment to writing by C.J. Chivers and Elliot Ackerman and beyond there is no shortage of excellent source material for Hollywood to mine, but by and large it hasn’t. Hollywood movies drive to a sure ending but those sure endings do not easily map on to the wars in Iraq and Afghanistan. Hanks offers documentaries and news coverage as possible venues. From the point of view of accuracy, it’s evident why these fit.

Outside of these venues, however, we’re in a time that has rediscovered and revamped long stories. High quality, binge-worthy streaming serials, and podcasts are just two of the places where narratives are given the time and space to open up. In 2014 Serialused its twelve episodes totake its listeners back to 1998 to carefully unfold the story of the murder of Hae Min Lee and its aftermath: the trial and incarceration of Adnan Syed. Americans devoured the series; we also live in a 280-character world, but strong story-telling still catches us and keeps our attention.

The breathing room created by the extended length of small screen serials or podcasts offer a number of crucial advantages to “the story that needs to be told” including the ability to move from place to place and the capacity to zero in on a small group of people and how they interact with one another. These capacities aren’t separate from accuracy. They ensure accuracy: these stories need a long timeframe and room to move around.

The geographic scope is crucial; the power to move between stateside locations, from stateside to overseas and between overseas locations is crucial. The new small-screen version of The Little Drummer Girl doesn’t set itself in the US, but in showing how terrorism came to Europe in the late ‘70s the show moves between Greece, London, Nottingham, Israel, Germany, Palestinian refugee camps, and those are only some of its locations, it dramatizes the kind of mobility necessary for telling the story Hanks describes.

Hanks calls for the realistic portrayal of people, “I don’t think there’s anymore stereotypical character than the twisted veteran who is never going to be the same.” There are more stereotypical characters than “the twisted veteran,” but the overall point that stereotyping veterans is far too easy definitely holds. Detective shows like The Wire kickstarted this, are a mainstay of streaming serials; they dramatize the relationships between people inside deeply hierarchical organizations, which suggests that a story about Afghanistan or Iraq could draw lessons from them in showing the dynamics between people interacting within organizational constraints.

Hollywood may not be the right venue, but narratives about Iraq and Afghanistan could certainly find a home in “a documentary or caring news media,” but may find more benefit in drawing on existing strengths in long form story-telling.