Marine Commandant Says He Has ‘No Idea’ On Troop Withdrawal Specifics

The Commandant of the Marine Corps says he has “no idea” on whether or when troops will be withdrawing from... 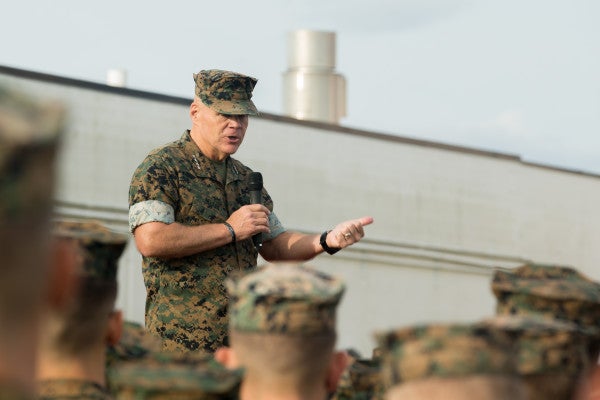 The Commandant of the Marine Corps says he has “no idea” on whether or when troops will be withdrawing from Afghanistan or Syria, according to The Wall Street Journal.

While visiting his troops in Afghanistan, Gen. Robert Neller was asked by a Marine about Trump's recent order to withdraw all troops from Syria and about half from Afghanistan, according to a report by the Journal's Ben Kesling.

Relaying what many of their family members were asking, the junior Marine was wondering, hey sir, are we about to go home?

“That’s a really good question. And the honest answer is I have no idea,” Neller answered. To another gathering of Marines, the four-star general said, “I don’t think anybody really knows exactly what’s going to happen. I’ve read the same stuff in the newspaper you did, I have a little more knowledge than that, but not a whole lot more.”

The Trump administration ordered the military to withdraw about 7,000 troops from Afghanistan “in the coming months,” The New York Times reported Thursday, citing two defense officials. But that word hasn't yet seemed to have trickled down to troops downrange, many of whom have been reading news reports of a potential hasty exit from Syria, Afghanistan, and the abrupt resignation of Defense Secretary Jim Mattis — all in the span of a week.

Neller indeed tried to reassure the Marines that they needed to “focus on their mission” in Afghanistan, while intimating that he still hadn't been given specifics by the White House, a senior defense official told Task & Purpose.

Meanwhile, the Journal reported that neither Navy Secretary Richard Spencer or Gen. Austin Miller, the top commander of all NATO forces in Afghanistan, had received official orders from the White House or Pentagon on the drawdown.

There are roughly 14,000 U.S. troops still in Afghanistan. A spokesman for the Resolute Support mission did not immediately respond to a request for comment from Task & Purpose.