Marine Lt. Gen. David Berger nominated to be the Corps’ next commandant 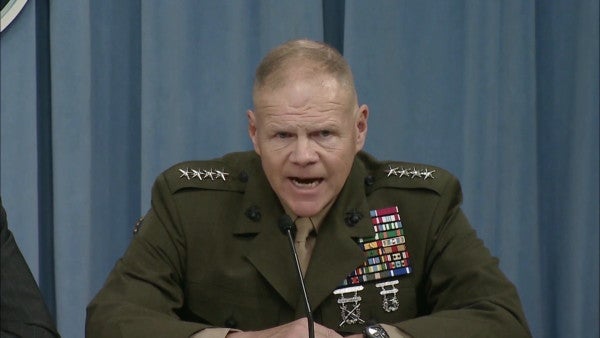 Marine Lt. Gen. David Berger has been nominated to become the Corps' next commandant, defense officials announced on Wednesday.

In confirmed by the Senate, Berger, who currently leads Marine Corps Combat Development Command in Quantico, Va., would receive his fourth star and replace Gen. Robert Neller, who has served as the Corps' 37th commandant since September 2015.

Neller, who is expected to retire this summer, oversaw updates to the Corps' physical and combat fitness tests, updated the service's tattoo policy, and required all Marines to acknowledge they understood the Corps' social media policy following the 2017 Marines United Facebook page scandal.

Most recently, Neller has pressed the White House and Congress to fund the $3.5 billion to repair hurricane damage to Camp Lejeune, North Carolina, amid a fierce debate about President Donald Trump's decision to use military construction funds to pay for the border wall.

In 1981, Berger was commissioned as an infantry officer after graduating from Tulane University in Louisiana. He served as a company commander and battalion operations officer in 2nd Reconnaissance Battalion during Operation Desert Storm. He later led Regimental Combat Team 8 in Fallujah and served commanding general of the 1st Marine Division in Afghanistan.

Gina Harkins of Military.com was first to report on Wednesday that Berger would be nominated to replace Neller as Marine Corps Commandant.