Corps investigating death of Marine colonel days before his retirement

The Marine Corps is investigating the death of Lt. Col. Brett A. Hart, the executive officer of Marine Operational Test and Evaluation Squadron One, who was found dead at Marine Corps Air Station Yuma on April 19. 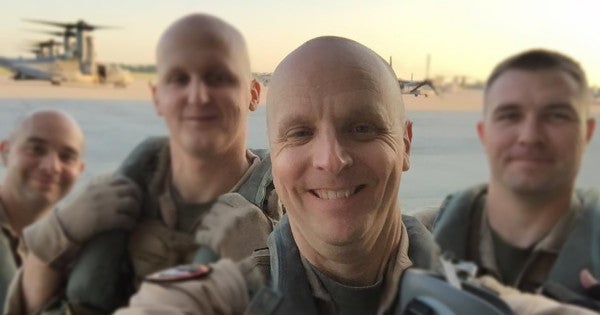 The Marine Corps is investigating the death of Lt. Col. Brett A. Hart, the executive officer of Marine Operational Test and Evaluation Squadron One, who was found dead at Marine Corps Air Station Yuma on April 19, a Corps spokesman told Task & Purpose.

“There is an open investigation into the incident,” Capt. Christopher Harrison told Task & Purpose. “Further details will be available once the investigation is complete.”

Hart, 48, was just days from retirement after 30 years of service when he took his own life, according to multiple sources. He left behind a wife, son, and daughter. A memorial service for Hart was held at the Yuma Chapel on April 26 — the same day his retirement ceremony had been scheduled.

“No rank is immune to suicide, not even an O-5 in the Marine Corps with over 30 years of service and one week away from retirement,” Marine veteran Samuel Grayman wrote in a public post on Facebook. “RIP Lt. Col Brett A. Hart, it was an honor to serve under your command at VMMT-204.”

Many of those who served with him during his career were shocked by his death, which came “out of the blue,” according to Task & Purpose columnist Carl Forsling, a friend and colleague of Hart.

“Brett was one of the people that was so with it, he would be the guy I would call for advice,” Forsling said. “I can’t figure out why he would do this.”

Hart enlisted in the Marine Corps in 1989 as a military policeman before earning a commission and beginning pilot training in May 1994, according to an official biography. He completed his initial training and was designated a naval aviator in Aug. 1997 before training on and deploying multiple times as a CH-46E “Sea Knight” helicopter pilot. In 2006, Hart began flying MV-22B Ospreys, and eventually became an Osprey flight instructor.

All told, Hart spent 1,200 hours in the MV-22B and 1,400 hours in the cockpit of the CH-46E. He flew under the callsign “Stork” — a reference to a character in the 1978 film Animal House with just one memorable line of dialogue, Forsling said.

“Lt. Col. Hart was an exceptional leader who cared deeply for his family, the Corps, and his fellow Marines,” Col. Peter L. McArdle, commanding officer of VMX-1, said in a statement to Task & Purpose. “We are deeply saddened by the loss of a great leader and friend, and we remain steadfast in our commitment to support his family throughout this difficult time.”

“The one thing that scares me about the whole thing, it’s not the paradigm of the ‘troubled Marine,’ or the sad person,” Forsling told Task & Purpose, adding that Marines may not tell others they love them since it could be perceived as weakness.

“If you have those feelings about someone, you should let them know,” he said.