“All our son did is ask the questions that everybody was asking themselves, but they were too scared to speak out loud.” 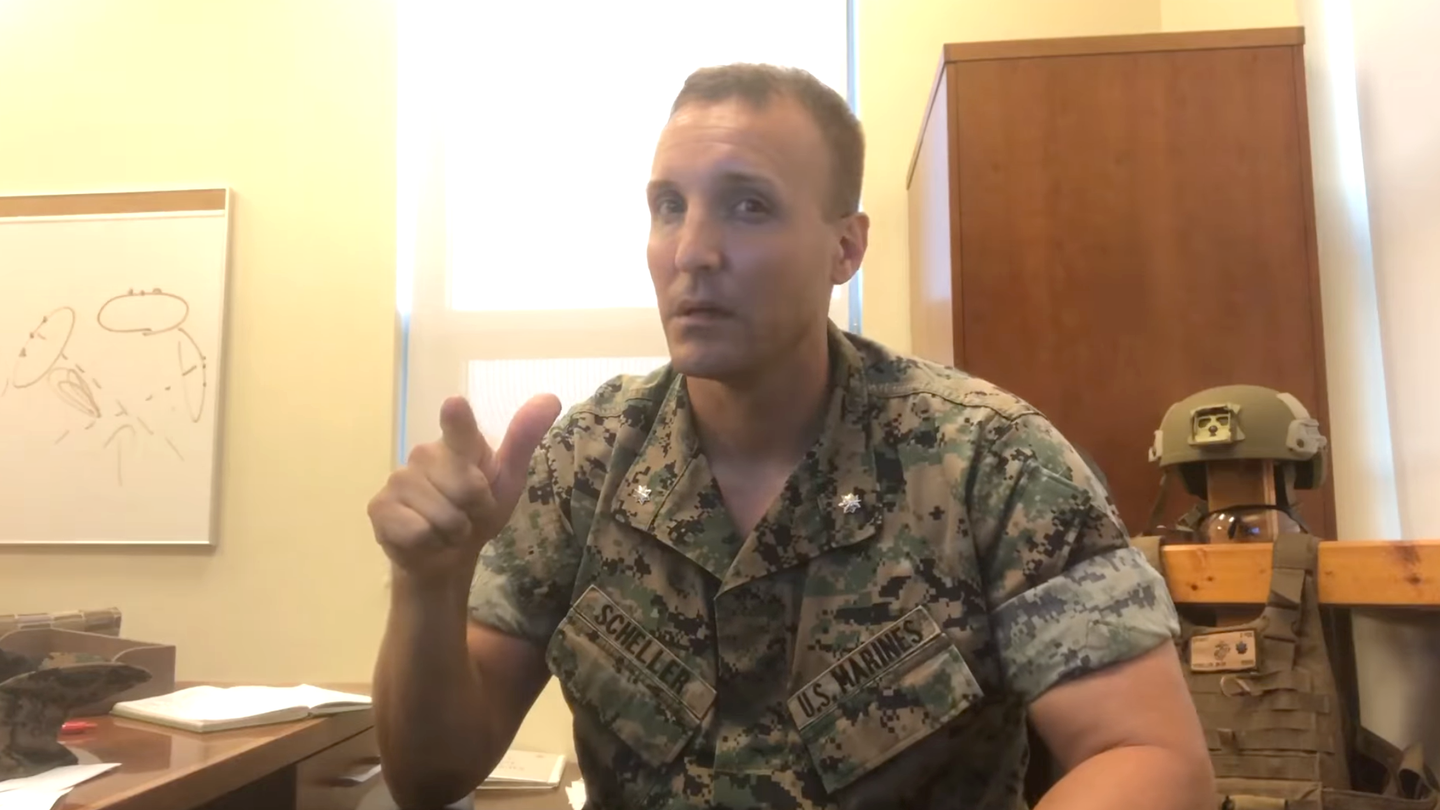 Lt. Col. Stuart Scheller, the Marine officer whose meteoric rise to internet fame began with a video criticizing military leadership over Afghanistan, is currently in the brig, his father told Task & Purpose.

“All our son did is ask the questions that everybody was asking themselves, but they were too scared to speak out loud,” said Stu Scheller Sr. “He was asking for accountability. In fact, I think he even asked for an apology that we made mistakes, but they couldn’t do that, which is mind-blowing.”

He said that his son is expected to appear before a military hearing on Thursday.

“They had a gag order on him and asked him not to speak,” the senior Scheller said. “He did, and they incarcerated him. They don’t know what to do with him.”

After this story was first published, the Marine Corps issued a statement confirming that Scheller has been sent to the brig.

“Lt. Col. Stuart Scheller Jr. is currently in pre-trial confinement in the Regional Brig for Marine Corps Installations East aboard Marine Corps Base Camp Lejeune pending an Article 32 preliminary hearing,” said Capt. Sam Stephenson, a spokesman for Training and Education Command. “The time, date, and location of the proceedings have not been determined.  Lt. Col. Scheller will be afforded all due process.”

(After publication the Marine Corps confirmed that Scheller is accused of the following offenses under the UCMJ: Article 88: Contempt toward officials, Article 90: Willfully disobeying superior commissioned officer, Article 92: Failure to obey an order, and Article 133: Conduct unbecoming an officer and a gentleman.)

Scheller first gained notoriety on Aug. 26, when he posted a video on Facebook and Linkedin criticizing the handling of the U.S. withdrawal from Afghanistan. In the video, Scheller accused senior military leaders of shirking their responsibilities, and questioned some of the command decisions that were made leading up to, and during, the final moments of America’s longest war.

“People are upset because their senior leaders let them down, and none of them are raising their hands and accepting accountability or saying, ‘We messed this up,’” Scheller said in the video.

Stu Scheller Sr. described his son as a proud American who loves the Marine Corps and has served proudly for the past 17 years.

“He’s asking for the same accountability that is expected of him and his men,” Scheller Sr. said.

The younger Scheller published his first video on the same day that a suicide bomber attacked Hamid Karzai International Airport’s Abbey gate, killing 11 Marines, one sailor, and one Army special operator. Scheller said in the video that he had a “personal relationship” with one of the fallen service members, but he did not elaborate.

The next day, Scheller posted on Facebook announcing that he had been relieved as battalion commander for Advanced Infantry Training Battalion at School of Infantry East at Camp Lejeune, North Carolina.

Since his first video, Scheller has been the subject of both tremendous praise and severe criticism in the military and veteran community. Some saw a battalion commander and an infantry officer who was risking his career to voice frustrations over a long-mismanaged and oft-forgotten war. But others saw an officer who broke with established norms by criticizing his chain of command publicly, and in so doing undermined good order and discipline.

However, Scheller Sr. said the “botched” withdrawal of U.S. troops from Afghanistan has likely struck a nerve for anyone who has served in the military over the past 20 years.

“I’ve had Vietnam veterans contacting me applauding him for his courage because they too want to know: Was it all worth it?” the elder Scheller said. “And by demanding accountability and honesty from his senior leaders, that’s all he was asking. And the way the Marine Corps has dealt with it: They have now put him in jail.”

While Lt. Col. Scheller has earned widespread praise on social media, he has also made several statements that have prompted concern about his well-being. On Aug. 29, he made a YouTube video from inside what he described as “an abandoned school bus in Eastern North Carolina,” in which he vowed to resign his commission and proclaimed, “Follow me and we will bring the whole f—king system down.”

Following that video, the Marine Corps announced in a statement that it had taken steps to “ensure the safety and well-being of Lt. Col. Scheller and his family,” but did not provide further information.

More recently, Scheller appeared in a Sept. 16 YouTube video, in which he pledged to file charges against Marine Gen. Kenneth McKenzie Jr., head of U.S. Central Command, for his mistakes leading up to the chaotic Afghanistan evacuation. He added in a Facebook post that he would charge McKenzie with 13 specifications of “Dereliction of Duty through Culpable Inefficiency” – one specification for each service member killed in the Aug. 26 attack.

On Saturday, Scheller wrote on Facebook that he had been ordered to stop posting on social media “without exception.” He also leveled criticisms against current and former military and civilian leaders as well as Task & Purpose for a Sept. 17 column arguing that he cannot charge McKenzie with dereliction of duty. (That story’s headline has since been updated to clarify that service members can prefer charges but not send other troops to a court-martial.)

Scheller ended his most recent post by indicating that he expected to be sent to pretrial confinement.

“What happens when all you do is speak truth and no one wants to hear it. But they can probably stop listening because… I’m crazy… right?” Scheller wrote.  “Col Emmel please have the MPs waiting for me at 0800 on Monday. I’m ready for jail.”

Update: This article has been updated to include additional information from Marine Corps officials and specifics on what articles of the Uniform Code of Military Justice Lt. Col. Scheller is accused of violating.