A ‘Hacksaw Ridge’ producer is making a war movie about Levi Shirley, an American volunteer who died fighting ISIS

A new post-9/11 war movie will tell the story of Levi Shirley, an American who volunteered to fight alongside the Kurdish YPG against ISIS, before his death in July 2016 during battle in Manbij, Syria. 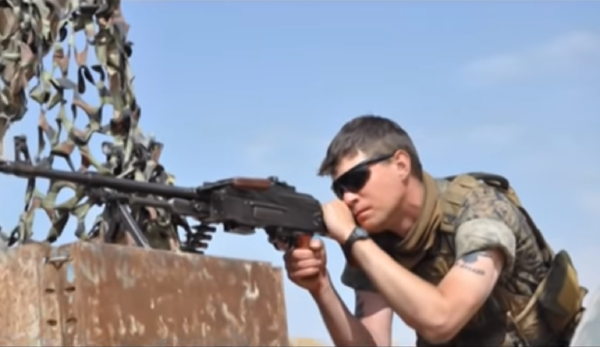 A new post-9/11 war movie will tell the story of Levi Shirley, an American who volunteered to fight alongside the Kurdish YPG against ISIS, before his death in July 2016 during battle in Manbij, Syria, Variety first reported on Monday.

Producer David Permut, who was nominated for an Oscar for World War II drama Hacksaw Ridge, told Variety that he's optioned the film rights for a Los Angeles Times exposé on Shirley, along with the life rights of his mother Susan.

So far, the details about the film remain scant, including its title, the cast, director, and expected release dates, but Permut shared his thoughts on why he wanted to spotlight Shirley's story.

“Levi had an incredible conviction to defend his country alongside the Kurds against the continuing threats of ISIS,” he told Variety. “This profound, important, and timely story is as relevant as ever given the unfortunate circumstances occurring in Syria, and we hope to honor Levi's sacrifice by telling his story and enlightening those who are unaware.”

A young man whose dreams of joining the Marine Corps were dashed due to his poor eyesight, Shirley was one of a handful of Americans who volunteered to join Kurdish fighters in the war against ISIS.

The Los Angeles Times'article by David Kelly, on which the film will be partially based, offers some insight into what we can expect to see in the film. We'll learn of Shirley's upbringing as the son of a Vietnam veteran whose war-time service may have left an indelible mark on him; how he and his mother squirreled away savings to pay for Lasik surgery so that he could enlist in the Marines, only to find out that his eyesight still didn't pass muster; to his decision to contact members of the YPG online and his two trips to Syria where he fought alongside the Kurds.

In all likelihood, it will also cover his death at age 24 during the “Manbij Meat Grinder,” a YPG offensive that saw brutal close-quarters urban combat. Shirley was the second American volunteer to die in Syria while fighting alongside the Kurds against ISIS. At the time of his death, he was on his second tour to Syria — and he hadn't told anyone he was going back.

It's not hard to see why Shirley's story — and those of other volunteers — would capture the attention of Hollywood filmmakers. There's the romantic idealism of fighting the good fight, doing the noble thing, that's put in sharp contrast with the unforgiving reality of fighting a war, not as a trained soldier with all the benefits of a conventional military at your back, but as part of a ragtag militia.

In a video interview reported by the Los Angeles Times, Shirley described his decision to join the fight against ISIS.

“Eventually, I'm going to die,” he said. “People die every day of heroin overdoses or because they got drunk and decided to drive on the highway or because they saw some stunt on 'Jackass' they tried to replicate. At least I'm doing something I'm proud of.”