When you’re manning the frontline in the war against ISIS, 15 miles from the stronghold of Mosul, there are a... 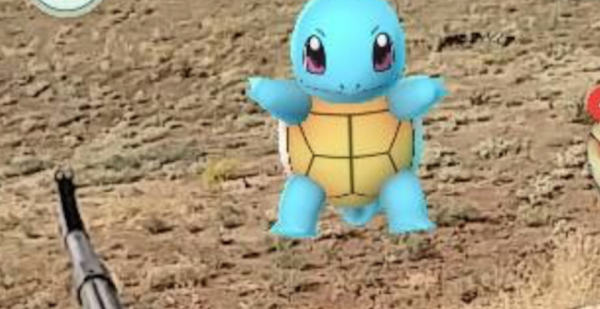 When you’re manning the frontline in the war against ISIS, 15 miles from the stronghold of Mosul, there are a lot of things you can expect to catch: a bullet, perhaps shrapnel from an incoming mortar, or maybe some trench foot or a fatal case of dysentery. But a little blue turtle with a curly tail and big purple eyes? With the recent unveiling of the wildly popular mobile app game, Pokémon Go, that’s now an option, too.

Louis Park is an American military veteran who is currently serving as a volunteer with Dwekh Nawsha, a Christian militia operating in around the village of Teleskof, where a Navy SEAL was killed in battle with ISIS in May. On July 8, Park uploaded a photo to Facebook of the no-man’s land that separates Teleskof from a nearby ISIS encampment. In the photo, front and center, just a few feet away from the muzzle of Park’s belt-fed machine gun, is Squirtle, a Pokémon character known for its mischievous ways and ability to squirt water out of its mouth. Cool!

But Park wasn’t just showing off his sick Pokémon skills. The photo was accompanied by an open challenge to the bloodthirsty jihadists dug in only a few kilometers away. “Just caught my first pokemen on the Mosul front line by Teleskuf,” reads the caption. “Daesh, come challenge me to a Pokémon battle. Mortars are for pussies.” Not surprisingly, given the world’s current obsession with Pokémon Go, the post went viral. According to Inverse, the photo inspired a “deluge” of “Wartortle” jokes, which are really, really funny — like, laugh-out-loud, pee-your-pants funny.

In an interview with Inverse, Park explained that the front lines of northern Iraq are not the most ideal hunting ground for Pokémon trainers. (Bummer, I know.) Sure, the area around Mosul is what some would call a “target-rich environment.” There are ISIS militants — or “targets” — everywhere. However, according to Park, what the region has in exploding mortars and AK-47-toting terrorists, it lacks in mythical creatures that you can catch with a little red ball. Fortunately, that’s not the case in Duhok, a city not far from Teleskuf, which, Park says, is bustling with Pokémon activity.

“When I go back to rear for R&R;, there are gyms here and people playing in Duhok,” Park told Inverse.

Will ISIS take Park up on his challenge? That remains to be seen. As we all know, the terrorist group, which began its bloody rampage through the region in the summer of 2014, does have access to the Internet; though, they typically use it to upload videos of people being beheaded and car bombs. If and when Park meets his foe on the digital battlefield — in one of the aforementioned “gyms” — he better emerge the victor. The world is watching. And this is a war we cannot afford to lose.